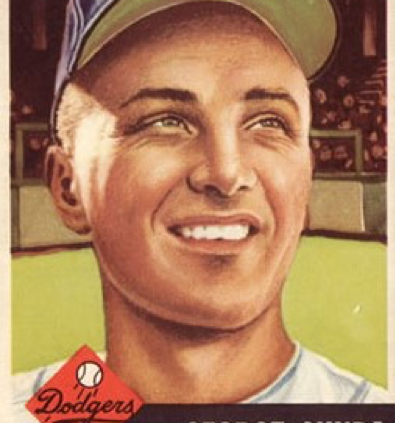 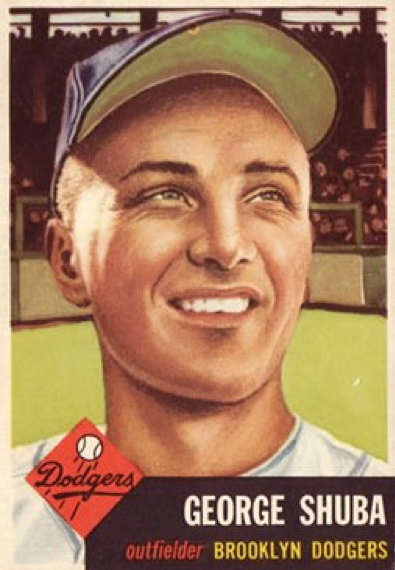 After he signed with the Brooklyn Dodgers, Jackie Robinson’s debut with the Montreal Royals in the 1946 season opener against the Jersey City Giants left a lasting impression in so many ways. Robinson’s four hits, four runs batted in, and two stolen bases led the Royals’ 14-1 rout. Joseph Sheehan, covering the game for the New York Times, noted that “Jackie Robinson converted his opportunity into a brilliant personal triumph.”1 In the third inning, as Robinson rounded the bases at Roosevelt Stadium after a three-run home run, the on-deck batter, outfielder George Shuba, approached home plate to congratulate Robinson. The ensuing handshake became a symbol of racial tolerance and the Associated Press photo appeared the next morning in the New York Times.2 Years later, plans were in progress to immortalize the “Handshake of the Century” with a larger-than-life bronze statue of that moment, placed in Youngstown, Ohio, Shuba’s hometown.3

For a young Brooklyn Dodgers fan of the 1950s, the heroes were named Jackie and Campy, Pee Wee and Gil, Newk and Duke, Oisk and Skoonj.4 There was also Shotgun Shuba, a utility outfielder and left-handed pinch-hitter. How did George Shuba become known as “Shotgun”?

In baseball parlance, “shotgun” usually refers to a powerful throwing arm.5 Analogously, “shotgun school” refers to “the philosophy that the more pitches a pitcher has in his arsenal, the better.”6 Neither applied to the offensive-minded game of outfielder Shuba. In 1945 Shuba spent the season playing for the Class A Southern Association’s Mobile Bears, an affiliate of the Brooklyn Dodgers. Sportswriter Bill Bingham of the Mobile Press applied the nickname to describe how Shuba hit line drives to all areas of the field, like buckshot being fired from a shotgun.7

Although Shuba first played for the Dodgers in 1948, it wasn’t until 1952 that he remained with them for an entire season. It was the season for his first big-league baseball card from Topps and he was thrilled.8 No doubt, it was his “career year”9 in virtually all offensive categories — batting average (.305), doubles (12), home runs (9), runs batted in (40), and slugging (.465). For the only time in his career, he received votes in the balloting for the National League’s Most Valuable Player, finishing tied for 31st place, behind eight other Dodgers. The voting was a testament to his performance as a valued utility player. Let’s tell the story about one particular game that season, one of 355 games that George Shuba played in his major-league career.

The Dodgers were visiting Boston for a two-game weekend series at Braves Field just before the annual All-Star break. National League baseball in Boston was in its last season before the Braves moved to Milwaukee. Overall attendance was the lowest in the major leagues, but this crowd (13,405) was the largest of the season for the Braves. The Dodgers had just extended their first-place lead to three games over the New York Giants on the Fourth of July at the Polo Grounds, just as it was after their last meeting a week earlier.10 Shuba extended his hitting streak to six games, contributing a home run off Dave Koslo in the 5-1 victory. 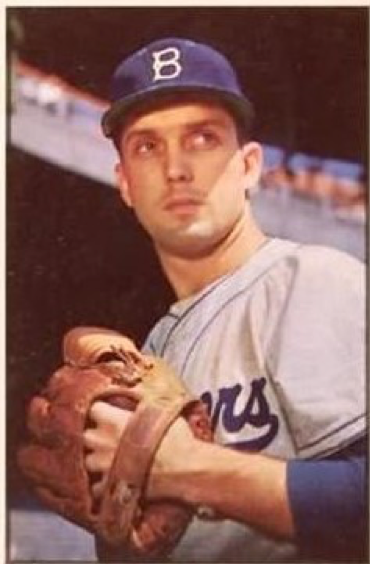 The Dodgers had already beaten the Braves all 11 times they met this season. Dodgers manager Charlie Dressen named Carl Erskine (7-2, 2.50 ERA) to start, less than three weeks after he pitched a no-hitter against the Chicago Cubs at Ebbets Field. In fact, “Oisk” was the first Dodgers right-hander to start against the Braves all season.11 Erskine had one of those victories in relief over the Braves in late May when the Dodgers swept a three-game series at Ebbets Field, prompting the Braves to replace Tommy Holmes as manager with Charlie Grimm.12 Grimm named Ernie Johnson (2-0, 4.75 ERA) as his starter.

Again, Shuba was in the starting lineup in a familiar spot, playing left field and batting fifth behind Roy Campanella. He was 8-for-18 during his current hitting streak. The Dodgers struck early. Billy Cox opened the game with a single to right. With two outs, Johnson walked Campanella. You had to wonder whether Johnson was pitching around Campanella to get to Shuba. After all, Campy was the reigning Most Valuable Player in the National League. On this night, Campy walked four consecutive times, once intentionally. Whatever the pitching plan, it didn’t work. Shuba clouted his third home run of the season for a 3-0 Dodgers lead. When Duke Snider followed with a single to left, Grimm had seen enough and Dave Cole replaced Johnson on the mound for the Braves.

The Braves began to narrow the lead at the outset. In the first inning, they got a leadoff home run from Sam Jethroe. In the third inning, they manufactured a second run against Erskine. After Jack Daniels opened the inning with a single to right, relief pitcher Sheldon Jones13 sacrificed him to second, and Daniels scored on a two-out single by Jack Dittmer. But Oisk got stronger over the last six innings, yielding only two hits and one run. In the sixth inning, Earl Torgeson walked and Sid Gordon doubled him home for the third and final Braves run.

Meanwhile, the Dodgers added single runs in the fourth and fifth innings. In the fourth, consecutive singles by Billy Cox, Pee Wee Reese, and Jackie Robinson yielded one run off Jones. In the fifth inning, Gil Hodges doubled to left and scored on Erskine’s single, his first run batted in of the season.

After Shuba singled in the ninth, Dick Williams ran for him, then replaced him as the left fielder. Shuba finished his night with two hits including that three-run homer, a walk, three runs batted in, and a .344 batting average. His hitting streak had been extended to seven games, matching the longest of his career.

In the bottom of the ninth inning, Johnny Logan doubled with two outs, bringing the tying run to the plate, but Erskine got Daniels swinging for his ninth strikeout of the game. The Dodgers pitching leader recorded his eighth win and fifth complete game of the season.

The Dodgers finished a two-game sweep of the Braves the next afternoon with an 8-2 win over Warren Spahn. Shuba had the day off against the lefty. When the All-Star break was over, the Dodgers were at Wrigley Field to face the Cubs. There was a sense of familiarity to the lineup. Shuba was back in his usual spot in the batting order and Erskine was starting on the mound. Shuba struck out in the first inning and by game’s end his hitting streak was over. Erskine never made it out of the first inning, yielding five hits to the only batters he faced as the Dodgers lost, 7-6. Neither was discouraged.

The Dodgers started a season’s best nine-game winning streak the very next day. During that stretch, Erskine pitched two complete games, including a shutout, and saved one, and Shuba contributed 4-for-12 with his bat. Extending their first-place lead to 7½ games over the Giants, the Dodgers were determined to make it back to the World Series for the first time since 1949. They did, but lost to the Yankees in seven games.

There is one game that Shuba will never forget. One year later, in the first game of the 1953 World Series against the Yankees’ Allie Reynolds, he hit a two-run home run pinch-hitting for Jim Hughes in the sixth inning at Yankee Stadium. “I still consider that home run my greatest pinch-hitting feat for I never gave up on the ball, and never gave in to the distractions of the sun and shade during that time at bat,” he said many years later.14 It was the first pinch-hit home run ever hit by a National Leaguer in the World Series.

Not bad, George Shuba! You are indeed one of The Boys of Summer.15

Ironically, Shuba also played a supporting role in the most dramatic of moments in arguably the most significant game in Brooklyn Dodgers history, Game Seven of the 1955 World Series.16 Shuba pinch-hit for second baseman Don Zimmer in the top of the sixth inning with the Dodgers leading 2-0. He grounded out in what would turn out to be his last at-bat in the major leagues.

Manager Walter Alston made a series of defensive moves for the bottom of the sixth inning — Jim Gilliam moved from left field to second base and the speedy Sandy Amorós came in to play left field, batting in Shuba’s spot. When Yogi Berra hit a fly ball into the left-field corner with two runners on base, Amoros raced and caught the ball on the run. He wheeled around and threw to Pee Wee Reese, who fired to Gil Hodges at first base to double off Gil McDougald, one of the two Yankee runners. Later, it was dubbed the “most fortunate strategic move” of the World Series.”17 If Gilliam had still been playing left field, he might not have been fast enough to reach Berra’s fly ball. It is also unlikely that, with a glove in his left hand, he would have been able to make the catch and throw out McDougald at first.

The author accessed Baseball-Reference.com for box scores/play-by-play information (baseball-reference.com/boxes/BSN/BSN195207050.shtml) and other data, as well as Retrosheet.org (retrosheet.org/boxesetc/1952/B07050BSN1952.htm). The baseball cards illustrated in this essay were issued in 1953 by Topps (George Shuba) and Bowman (Carl Erskine).18

2 Associated Press, “The Highlight of a Brilliant Debut,” New York Times, April 19, 1946: 22. “Jackie Robinson, who had a hand in seven of the 14 Montreal runs, being congratulated by outfielder Shuba as he scores after hitting his homer in the third inning at Jersey City.” The photo can be accessed through NYTimes.com, nytimes.com/2014/10/01/sports/baseball/george-shuba-whose-handshake-heralded-racial-tolerance-in-baseball-dies-at-89.html (Richard Goldstein, “George Shuba Dies at 89,” New York Times, October 1, 2014: B19).

9 Dickson, 163. “The best season of a player’s career; a season as statistically good as a particular player can expect to have during his playing years.”

13 Speaking of nicknames, Roscoe McGowen referred to “Available” Jones in his account of the game in The New York Times. In his biography of Jones, SABR author Jimmy Keenan notes that during Jones’s six seasons (1946-1951) with the New York Giants, he was willing to take on any mound assignment as a starting pitcher or in relief. “The moniker was derived from Al Capp’s Available Jones, who first appeared in the Li’l Abner comic strip in 1941. “If it is too unpleasant for you to do, I’m available” was the character’s catchphrase.” (Jimmy Keenan, Sheldon Jones, SABR Baseball Biography Project).

15 Kahn, 224-241. This chapter is devoted to Shuba and is entitled The Bishop’s Brother, noting that Shuba’s brother was a monsignor in the Catholic Church. Over the years, Kahn and Shuba became great friends and Kahn wrote the foreword (A Man with a Bat) in Shuba’s 2007 book.

18 The back of the George Shuba card (1953 Topps #34) says that he was nicknamed “Shotgun” because of his powerful throwing arm. Although The Dickson Baseball Dictionary, 3rd Edition notes a similar definition for the term, the origin of Shuba’s nickname is more accurately discussed in this essay. Shuba reacted to the Topps error, “Holy, Toledo! Where did they get that one!” (Shuba and Gulas, My Memories as a Brooklyn Dodger, 77.)