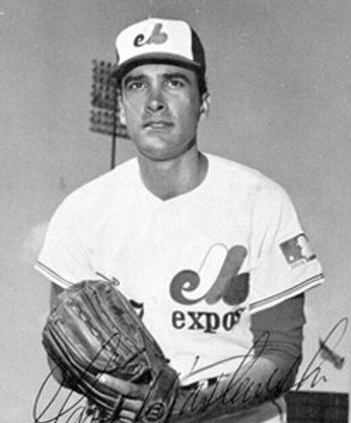 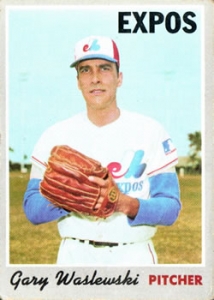 The Montreal Expos achieved all kinds of distinctions in their eventful first season. They beat the New York Mets 11-10 in the first game in franchise history, on April 8, 1969. On April 14 they beat St. Louis 8-7 in the first major-league game in Canada. Mack Jones hit the first big-league homer on Canadian soil in that game, while Dan McGinn became the first major-league pitcher to win a game there. Three nights later in Philadelphia, Bill Stoneman pitched the first no-hitter by a Canadian team, winning 7-0 in just the Expos’ ninth game.1

Those same Phillies figured into a less heralded but quite durable achievement for the Expos later in 1969. In the second game of a July 6 doubleheader at Connie Mack Stadium, Montreal’s Gary Waslewski pitched a one-hitter, facing the minimum 27 batters and wrapping up matters in a scant 1 hour and 36 minutes. At the start of the 2021 season, Waslewski’s masterpiece remained the shortest nine-inning game in the history of the Expos or their successor team, the Washington Nationals.2 The Expos moved to Washington, D.C., for the 2005 season, after playing in Puerto Rico for parts of 2003 and 2004.

While Gene Mauch’s 1969 Expos achieved scattered successes, they also suffered from the growing pains common to first-year expansion teams. In May and June, the team lost 20 games in a row. The Montrealers entered the doubleheader in last place in the brand-new National League East with a 25-54 record, 26 games behind3 the first-place Chicago Cubs.

Stoneman, the no-hit hero, exemplified the Expos’ struggles. At the end of play on July 5, he led NL pitchers in losses, runs surrendered, earned runs, walks, and home runs given up, and had the second-highest ERA among qualifying pitchers at 5.40. The Phillies slapped him around in the first game of the July 6 doubleheader. Stoneman gave up five runs in 1⅓ innings as Philadelphia romped to a 13-2 victory. His record fell to 4-12.4

Bob Skinner’s Phillies entered the day in fourth at 35-42, 15 games back.5 About one month remained in Skinner’s Philadelphia managing career: He resigned on August 7, blasting team management for not supporting him in his attempts to discipline controversial star Dick Allen.6 As of July 6, Allen – the team’s biggest offensive weapon – was roughly two weeks into an indefinite suspension, a war of wills with Phillies management that ended up lasting 26 days.7

Waslewski, the Expos’ second-game starter, was best known for making a surprise start for the Boston Red Sox in Game Six of the 1967 World Series – a must-win game for Boston. The rookie with only 12 games of regular-season experience pitched into the sixth inning as Boston won 8-4. The righty from Connecticut worked in 34 games for the ’68 Red Sox before being traded to St. Louis for Dick Schofield that December. After 12 early-season appearances in relief for the 1969 Cardinals, he was on the move again, traded to the Expos on June 3 in exchange for Mudcat Grant.

In 11 games with Montreal, all but one in relief, Waslewski had no decisions and a 2.66 ERA. Between St. Louis and the Expos, Waslewski had pitched six previous games against the Phillies in 1969, earning a save against them in a two-inning performance on July 4. Mauch said Waslewski’s start was “born of necessity”: With the Expos facing their fifth doubleheader since June 22, they needed another starter to step up.8

Opposing Waslewski was lefty Grant Jackson, a bullpen standout for the 1967 and ’68 Phillies. Jackson had been converted to a full-time starting role in 1969 and entered the game with a 9-6 record and a 3.02 ERA. He had won his previous five decisions. His only experience against the Expos had been a rare bullpen appearance on June 28, when he pitched two-thirds of an inning, giving up one hit and allowing one of two inherited runners to score. Waslewski pitched a scoreless inning of relief in the same game.

The 8,664 fans at Connie Mack Stadium that Sunday saw the Expos strike quickly, building a 2-0 lead on three first-inning hits. With one out, right fielder Rusty Staub singled to center, then was forced at second on a groundball by first baseman Bob Bailey. Bailey’s grounder could have been an inning-ending double play, but Phillies second baseman Tony Taylor’s throw to first was off-target.9 Third baseman Coco Laboy singled to center, and left fielder Jose Herrera scored both runners with a double to center field. Second baseman Gary Sutherland followed with a walk, but catcher Ron Brand forced him with a groundball to get Jackson out of the inning.

The game settled into a pitchers’ duel. Waslewski retired the first 12 Philadelphia hitters in order, on a mixture of pop flies, liners, grounders, and three strikeouts. Through the fifth, Jackson allowed only one additional baserunner: Staub singled in the third and was quickly erased on a double play.

The Phillies posted their only hit in the bottom of the fifth, as third baseman Rick Joseph led off with a groundball single into center field on a fastball down the middle of the plate.10 First baseman Deron Johnson erased him by grounding into a double play, and shortstop Don Money fouled out to Brand.

The Expos doubled their lead in the seventh. Again Herrera was involved, and again the damage was done with two out. Herrera led off with a single, and two outs later, shortstop Bobby Wine singled him to second. Waslewski scored them both with a double to left field to make Montreal’s lead 4-0.11 They were the pitcher’s first career runs batted in and his only RBIs of the season. Waslewski drove in only one additional run in his six-season career, while pitching for the New York Yankees in 1970.

Johnson drew the Phils’ only walk in the eighth, only to be doubled up on a grounder to short by Money. The Expos tacked on another run in the ninth on a single by Sutherland, a throwing error by Taylor, and a single by Brand. Brand reached third later in the inning but was picked off, in a play that went down as an unsuccessful attempt to steal home. Mauch argued that Jackson balked on the play; the Philadelphia Daily News pointed out that the already short game would have been even briefer without Mauch’s protest. “If that wasn’t a balk, there isn’t a cow in Texas,” Mauch colorfully declared.12

Waslewski finished off the Phillies by striking out right fielder Ron Stone, getting catcher Mike Ryan to fly to right, and getting Rich Barry, pinch-hitting for Jackson, to ground to shortstop. The 28-year-old Barry had made his big-league debut against Waslewski two nights before, in another unsuccessful pinch-hitting appearance. Barry played 20 games for the 1969 Phillies and then was gone from the major leagues.

Waslewski struck out five hitters in earning his first win of the season against two losses. In 42 career big-league starts, it was his only shutout.13 Afterward, he credited his success to working quickly and throwing strikes: “You go out and throw strikes, make them hit the ball and get the hell out of there. … When I made a bad pitch they hit it right at somebody. They were hitting the first or second pitch and guys were making great plays everytime [sic] someone hit it hard.”14 The game was one of two one-hitters pitched on July 6. Dick Kelley of San Diego, another brand-new team for 1969, turned in the other one-hitter in a 1-0 triumph over Houston.15

Jackson scattered 10 hits and one walk and struck out four Expos in taking a complete-game loss. He continued to work predominantly as a starter in 1970, then moved back to the bullpen for a long and successful career that ended in 1982.

While Waslewski’s gem remained the shortest nine-inning Expos or Nationals game as of 2021, it wasn’t even close to being the shortest game in the Phillies’ much longer history. On September 28, 1919, the Phillies and New York Giants completed the first game of a doubleheader at the Polo Grounds in a remarkable 51 minutes – the fastest nine-inning major-league game ever. The Phils lost that game too, 6-1.16

3 Retrosheet lists the Expos’ deficit as 26 games; Baseball-Reference lists it as 26½ games. The discrepancy is due to the first-place Chicago Cubs, whose June 15 game was suspended and completed on September 2. The Philadelphia Inquirer of July 6, 1969, listed the Expos as 26 games behind, so the author opted to side with a contemporary record. Philadelphia Inquirer, July 6, 1969: 3, 1.

4 Stoneman managed to turn his season around to some degree, finishing with an 11-19 record and a 4.39 ERA. He still led the league in runs, walks, and hit batsmen.

5 Retrosheet lists the Phillies’ deficit as 15 games at close of play July 5; Baseball-Reference lists it as 15½ games. The same explanation detailed in Note 3 applies here.

7 Details of the suspension are included in Allen’s SABR biography, written by Rich D’Ambrosio. The biography also mentions that Allen was known as Richie or Rich while in Philadelphia, even though he said Dick was his preferred name.

11 Lewis’s Philadelphia Inquirer story said Waslewski hit a “bad slider,” but did not specify whether that description was provided by Jackson, Waslewski, or someone else.

13 Waslewski appeared in 152 major-league games; of which 42 were starts.