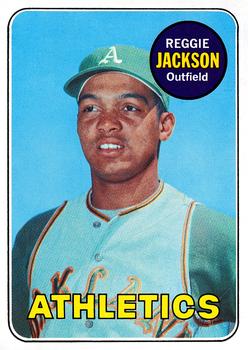 Oakland’s Reggie Jackson entered the 1969 season as one of the game’s more promising young players. The 22-year-old hit 29 home runs (fourth in the AL) in 1968 and finished in the top 10 in several other offensive categories, while also leading the league with 171 strikeouts. In the A’s first year in Oakland, they finished 82-80, their best showing as a franchise since they were in Philadelphia in 1952. The club was filled with young players – Rick Monday, Catfish Hunter, Joe Rudi, Sal Bando, Blue Moon Odom – all in their early 20s. The future looked bright indeed.

By June 14, the A’s were at 28-25, a game back of the Twins. Jackson was the big star in the early going, with 20 homers already (tied with Boston’s Rico Petrocelli), and a .661 slugging percentage. He was also talkative and showy, in a way that was relatively new to the game. “I used to chase a lot of bad pitches,” said the young star. “Now I try to concentrate more at the plate. Joe D[iMaggio and John McNamara [both coaches] have helped me a lot.”1

The A’s traveled to Boston to face the Red Sox, who were were 36-20, but four games behind a great Baltimore Orioles team that already seemed uncatchable. Besides Petrocelli, who was tied for the lead in the homers while leading in slugging and on-base percentage, their strong lineup included Carl Yastrzemski’s 15 homers, and Reggie Smith’s all-around excellence. The pitching staff, paper-thin even during their 1967 pennant-winning season and hampered by injuries since, remained the biggest problem. They had two rookies (Mike Nagy and Ray Jarvis) in their starting rotation.

The A’s touched Jarvis for a run in the first inning, on a Bert Campaneris single to center, a stolen base, and Jackson’s ground-rule double to right. Yastrzemski tied the game with a long homer to right in the bottom of the first.

Yaz was the biggest star in Boston, and arguably the biggest star in baseball. His 1967 Triple Crown – 44 home runs, 126 RBIs, .323 batting average – is one of baseball’s legendary seasons, and he followed that up with another batting crown, while also leading in walks and OPS. His 1968 numbers – a .301 batting average and .922 OPS – don’t look like much a half-century later, but it was a historically awful season for hitters, with the American League as a whole batting only .230. Yaz was the league’s best offensive player and a perennial Gold Glove winner.

Yastrzemski’s 1969 looked like more of the same. His homer off Odom was his 16th of the season, and his other numbers were consistent with his superstar seasons.

In the meantime, the A’s added a run in the second on Dick Green’s RBI single, and three more in the third on Jackson’s two-run homer, a tremendous drive into the center-field bleachers, and another Green RBI hit that chased Jarvis. The A’s 5-1 lead held through three innings, and Odom looked to be cruising.

The game effectively ended in the fifth when the A’s scored five more runs. The Red Sox committed two errors in the inning, making all the runs unearned, but the key hits were a double by Campaneris and a home run to deep center by Jackson, his second homer of the game. The A’s had 14 hits through five innings.

In the top of the sixth, a single by Odom and two walks brought up Jackson with the bases loaded and two out. Jackson struck out – not an unusual outcome for the strikeout-prone slugger, but shocking given the rest of his day. For this feat, Red Sox pitcher Bill Landis got a standing ovation as he walked from the mound to the dugout.2

In the bottom of the sixth inning, with the Red Sox down 10-1, Yastrzemski hit his 17th home run, his second of the game, and only the team’s second hit off Odom. Thus energized, four consecutive Boston singles brought home two more runs. That ended Odom’s day, but the lead was still 10-4.

In the seventh the A’s put together another five-run inning. Catcher Phil Roof struck the big blow with a three-run home run off Landis, which was followed by three straight singles to load the bases for – who else? – Jackson. A line single to center gave Reggie seven RBIs, and the A’s a 15-4 lead.

With the game no longer in doubt, the remaining fans were likely just rooting for more runs to be scored by either side. The Red Sox struck next, on a three-run home run by Smith in the seventh. The Red Sox’ very own Reggie was having his own breakout season – 9 homers and a .318 batting average at the end of the day. Still just 24 and in his third season as a regular, center fielder Smith was one of the brightest young players in the game. The score was 15-7.

On the off-chance that there were one or two people in the crowd still hoping for a miracle, the A’s put together another five-run inning, their third of the game. Relief pitcher Paul Lindblad singled in a run, and Ted Kubiak doubled in another. After a walk, Jackson came up to the plate, with the bases loaded yet again. This time luck intervened, as Smith’s failed attempt at a shoestring catch resulted in the ball rolling past him all the way to the outfield wall. All three runners scored, giving Jackson three more RBIs. (When he got only as far as first base on the hit, he got a brief lecture in the dugout from his manager, Hank Bauer.3)

Jackson’s final tally: 5-for-6 with a walk, 2 homers, a double, and 10 RBIs, one shy of the all-time American League record.4

The A’s tallied another in the ninth, also eventful. With Danny Cater on second, Green hit a fly ball to deep left field that Joe Lahoud caught after colliding with the fence. Cater scored from second on the sacrifice fly, making the final score 21-7.

In all, the visitors tallied 25 hits, including three by Green, Tommie Reynolds, and Monday. The A’s used just two pitchers (Odom and Lindblad), and even they were 3-for-5 at the bottom of the order. The only two innings in which the A’s didn’t score, they loaded the bases. A bloodbath.

The Red Sox also committed six errors, causing Yastrzemski to call the game “the most disgraceful thing I’ve even been in. Think of it happening to a team like ours.” According to the Globe, “a complete cloud of embarrassment hung over the dressing room.”5

But the story of the game was Reggie Jackson. “It’s going to take me an hour to get back on the ground,” said the always quotable star as he ate his postgame sandwich. “I’ve never had a day before like this at anything … baseball, basketball, track and field.”6

“I’m not a super star,” Jackson insisted. “You have to be consistent like Yastrzemski to be a super star. I’m a streak hitter right now, and I have to be more consistent.” He also noted the role luck played in his big day, mentioning all the baserunners and the fortunate bloop hit.7

Yastrzemski was having none of the “luck” talk. “He can be one of the best players in the game,” said Yaz, who had three hits and two homers himself. “All he is has to do is just keep adjusting to the pitchers every time they adjust to him. He has everything else – the arm, the speed, the strength. I think he and Reggie Smith can be the top players in the league in the future.”8

Red Sox manager Dick Williams was another Jackson fan. “We used to be able to get him out on the breaking ball,” said Williams. “But now he hits the breaking ball a lot more so we have to mix them up on him this year.”9

Jackson’s teammates gave him a standing ovation when he came into the clubhouse after a postgame interview. When he left Fenway Park, there were 100 people waiting outside to get his autograph. “Where did they all come from?” said Jackson.

Reggie had plenty of big days ahead, on baseball’s biggest stages and biggest moments. June 14, 1969, one could argue, was when the baseball world became aware of what they might have on their hands.

4 Held by Tony Lazzeri of the Yankees, May 24, 1936, in Philadelphia against the Athletics.