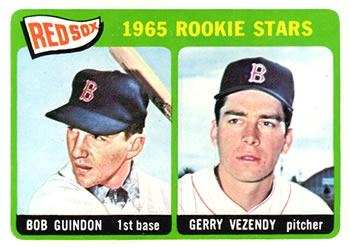 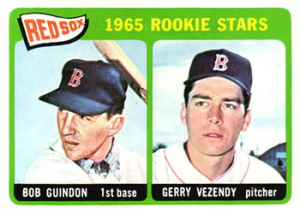 How hard did Jerry Vezendy throw?

Hard enough to strike out 102 batters in 71 innings in the Class A New York-Penn League in 1964. Hard enough for the Boston Red Sox to sign him to a major-league contract that October to prevent him from being drafted by another team.1 Hard enough, too, to land on a Topps “Rookie Stars” baseball card in 1965 before he’d played a game in the big leagues.

As it turned out, the Pennsylvania-born righty’s career trajectory fell short of Triple A, much less the major leagues. Although Topps tabbed him as a star, wildness and injuries limited him to three minor-league seasons. His career topped out with eight games at Double A in 1965.2

Still, Vezendy’s velocity was enough to earn him notice in his rookie year of 1964, when he dazzled batters as a member of the Wellsville (New York) Red Sox. On June 26 of that year, he claimed his first professional win, striking out 16 Batavia (New York) Pirates and throwing his second complete-game three-hitter in only his fourth pro appearance.

In his first pro game, on June 14, the 21-year-old pitcher from the University of Maryland surrendered only a double and two singles to the Geneva Senators but lost 3-1 in the first game of a seven-inning doubleheader. He walked six batters and struck out three.3 The Senators were one of the league’s best teams, closing the season only 1½ games behind first-place Auburn with a 79-51 record.

Batavia, in contrast, was among the worst-performing teams of any season at any level. Despite having respected baseball veteran Gene Baker as manager, the Pirates ended the season with a 33-97 record, 47½ games out of first place. The parent team in Pittsburgh operated four Class A teams and a Rookie-level team in 1964, and apparently, the Pirates didn’t have the young talent to fill all those roster spots. The Class A team in Kinston, North Carolina, was the only one of the five teams to post a winning record; its roster boasted five future major leaguers.4 The Batavia team produced only one future big leaguer, 19-year-old pitcher Dock Ellis, who did not play on June 26.

As of June 26, Wellsville was in fourth place with a 27-28 record, while Batavia was well sunk in last place at 13-41.7 The junior Red Sox hosted a notable visitor that day, as former Red Sox star and future Hall of Famer Bobby Doerr was in Wellsville to work with the team’s hitters.8

Vezendy’s opposite number, Curt Cleaver, was a 21-year-old righty from Western Michigan University making his first professional start.9 Cleaver’s teammates staked him to a 1-0 lead with their first hit of the game, when center fielder Conard Brown led off the second inning with a solo homer to center field.10 Brown hit 12 homers that season, ranking him second on the Batavia team.11

Cleaver held the Red Sox without a hit until the fourth inning, when Fanzone and second baseman Bob Grenda manufactured Wellsville’s first run. With one out, Fanzone doubled and took third on a wild pitch. Grenda walked. Fanzone and Grenda then pulled off a double steal, with Fanzone crossing the plate before the throw from second base arrived, tying the game, 1-1.

Catcher Moses’ solo homer down the right-field line gave Wellsville a 2-1 lead in the fifth, and the Red Sox burst out for three more runs in the sixth. Schlesinger homered to left, his 15th four-bagger of the season.12 Right fielder Bob Nash beat out a bunt and took second on a wild pickoff throw by Cleaver. Hough lined a single off Cleaver’s glove to put runners at the corners. A passed ball by Batavia catcher Tommy O’Connor scored Nash and allowed Hough to move to third, and a wild pitch brought Hough home for a 5-1 lead.

While his teammates piled up runs, Vezendy plowed through the Pirates’ hitters. Batavia didn’t collect a second hit until the seventh inning, when left fielder Larry Nichols singled but advanced no farther. Wellsville tacked on a sixth run in the bottom half of the inning on a walk, a single, and another single by Schlesinger. Cleaver left after seven innings, having given up eight hits, six runs, and five walks. He struck out 11 batters.

In the eighth, Batavia shortstop Don Predovic led off with his team’s third and final hit, another single. Vezendy struck out the next three hitters to end the inning. Batting against reliever Scotty Killian, Wellsville made it 7-1 in the bottom half on a hit, two walks, and yet another wild pitch.

Vezendy wrapped up his complete game in style in the ninth. He struck out the final three batters – second baseman Bienvenido Herrera, right fielder Samuel Watson, and center fielder Brown – to close the game with 16 whiffs. The game ended in 2 hours and 25 minutes. Unfortunately, accounts in the Wellsville and Batavia newspapers don’t say how many fans attended.

In two stops at Class A that season, Wellsville and Winston-Salem, Vezendy combined for a 9-4 record and 3.23 ERA in 19 games, striking out 173 hitters in 120 innings. (He also walked 108 batters, a sign of problems to come.)

After the season, he was cited in news reports as one of four finalists for the Stedler Award, given to the New York-Penn League player expected to go the furthest in baseball. The award went to his teammate Schlesinger.13 The Wellsville newspaper also reported Vezendy’s signing with the Boston Red Sox in October: “It was decided that anyone who threw as hard as Vezendy did should be protected for at least one year to see how far he could be developed.”14

Vezendy pitched that winter in the Florida Winter League, where he threw a complete game to beat a young Catfish Hunter – though the 9-5 score suggests it was no masterpiece of the pitcher’s art.15 Vezendy’s teammates included future big-league regulars George Scott, Reggie Smith, Joe Foy, and Tony Horton, while a young Joe Rudi, Dave Duncan, and Ted Kubiak appeared for the opposing team.

Entering 1965, Vezendy was Boston’s “designated player.” This meant that he was a first-year player, protected from the draft, who could be sent down to the minors. Other players in his position were required to either ride the big-league bench or be exposed to waiver purchase by other teams.16 Designated players on other teams’ rosters at the start of 1965 included Rod Carew, Bobby Murcer, Don Kessinger, John “Blue Moon” Odom, Bob Robertson, and Rick Reichardt.17

But the Red Sox gave up on Vezendy that season, even as young collectors were pulling his “Rookie Stars” card out of Topps packs. Boston waived Vezendy on June 21 after he compiled an 0-3 record at Double-A Pittsfield, with 26 walks in 22 innings. The St. Louis Cardinals picked him up and sent him to Class A Raleigh, where he finished the season. A 3-11 record and 5.42 ERA at Class A Rock Hill in 1966 ended Vezendy’s career.

The Pittsfield newspaper reported that Vezendy was beset by “wildness and a siege of arm trouble,”18 while articles from Vezendy’s 1965 stint as a Cardinals farmhand in Raleigh, North Carolina, mention struggles with control.19 Another article published years later blamed a chronic sore arm for ending his career.20 In December 1974, 10 years after his high-water mark as a Red Sox prospect, Vezendy was reported to be coaching high-school basketball in his home region of Pennsylvania.21 Vezendy died in 2004; his gravestone features what appears to be the same headshot of him, in a Red Sox uniform, used on his Topps card.22

Jerry Vezendy’s full name was Gerald Michael Vezendy. This story uses the spelling “Jerry” based on Vezendy’s own use of that spelling on a 1964 survey filled out for statistician, baseball publicist, and future SABR member William J. Weiss. “Jerry” was also used in Wellsville newspaper accounts from 1964; many news stories from other seasons, including Boston Globe stories from spring training 1965; his Baseball-Reference page; and online athletic records from the University of Maryland. His 1965 Topps card spelled it “Gerry,” as did The Sporting News in several 1964 and 1965 items and the Berkshire Eagle newspaper during his 1965 stint in Pittsfield, Massachusetts.

In addition to the specific sources cited in the Notes, the author consulted Baseball-Reference.com and Retrosheet.org for general player, team and season data. The author also thanks John Fredland for research assistance.

Neither Baseball-Reference nor Retrosheet provides box scores of minor-league games, but the June 27, 1964, edition of the Wellsville (New York) Daily Reporter published a box score.

2 The other player on the 1965 Red Sox Rookie Stars card, first baseman Bobby Guindon, also did not develop into a star. Guindon, a native Bostonian, had already completed his major-league career when the card was issued. He appeared in five games with the Red Sox in 1964.

5 The others were pitchers Bill Rohr and Ken Wright.

16 “The 18 Other Bob Holberts,” Binghamton (New York) Press, April 21, 1965: 54. The Washington Senators, alone among big-league teams, did not announce a designated player that season.

18 “Sox Shorts,” Berkshire Eagle (Pittsfield, Massachusetts), June 22, 1965: 18. A June 1 article in the same paper reported that Vezendy had gone on the disabled list with an inflamed tendon in his right arm.