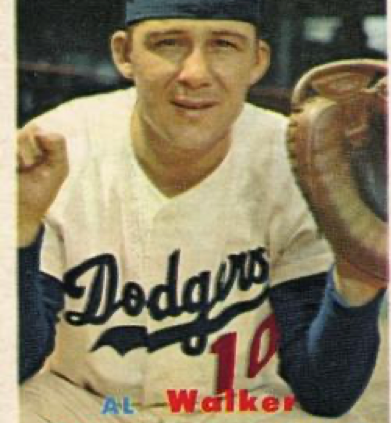 “Dependable Al is Brooklyn’s second line of defense behind the plate. He’s as smart a backstop as you’ll find in baseball and handles pitchers expertly.” – 1957 Topps Al “Rube” Walker card (#147)1 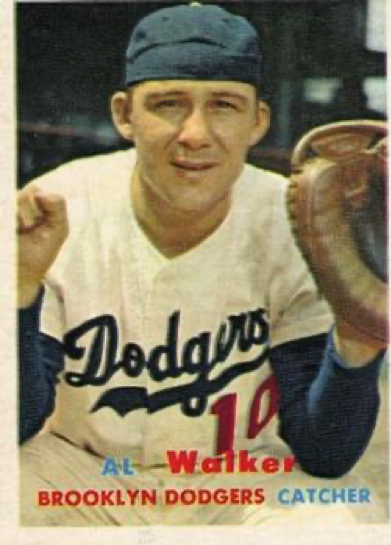 As their battle with the Phillies for the 1950 National League pennant came down to the last day of the season, the Dodgers lineup had only one apparent weakness, left field. Duke Snider and Carl Furillo played virtually every day in center field and right field, respectively, but five different players manned left field. In 1951, it remained for Dodgers general manager Buzzie Bavasi to solve the problem. As the June 15 trading deadline approached, five Dodgers had already roamed left field.2

The trade was big news for Dodgers fans, enough so to make it worthy of the front page of the New York Times.3 Clearly the acquisition of Pafko was the centerpiece of the trade and the exchange of backup catchers seemed of little consequence. Dodgers manager Charlie Dressen gushed about acquiring Pafko and lefty Schmitz, but the story of Rube Walker was relegated to a few short sentences in the last paragraph on Page 11.4

Cubs fans were irate. They labeled the trade a panic move by the Cubs, who had lost 10 of their last 12 games. Manager Frankie Frisch told Chicago Tribune sportswriter Edward Prell, “We had to do something.”5

By the time the 1953 season opened, Walker was the only former Cub in that trade who remained on the Dodgers roster. He had demonstrated that he was a reliable backup to catcher Roy Campanella. As Walker noted in Danny Peary’s 1994 book, We Played the Game, “I admired Campanella a great deal and we were good friends. He is remembered for his happy demeanor, but he was a serious player.”6 Campanella spoke of his teammates in a similar fashion: “We spent so much time together off the field. We used to have a good fishing group between Gil Hodges, Carl Furillo, Carl Erskine, Rube Walker, and myself.”7

Rube Walker hit to a career .227 batting average, but inexplicably loved Cincinnati pitching. Retrosheet notes his career .279 average against them in 226 at-bats, over 40 points higher than against any other team.8 For example, on May 21, 1952, when the Dodgers thrashed the Reds, 19-1, at Ebbets Field, Walker’s two hits were right in the middle of the record-setting 15-run first inning.9 Even as far back as his rookie 1948 season as a Chicago Cub, Walker hit 8-for-15 against the Reds.

Let’s explore when Cincinnati came to Ebbets Field for an important four-game series in early June 1957, the last season for the Dodgers in Brooklyn. Now known as the Redlegs, they were in first place, 1½ games ahead of the Dodgers.

Walker was in the lineup for the series opener on June 7, catching Roger Craig because Campanella was bothered with a throwing-hand injury.10 Craig pitched a complete game and Walker’s first home run of the year, over the right-field wall in the fourth inning, put the Dodgers ahead for good on their way to 6-3 win.

The next afternoon, the Redlegs started Warren Hacker (3-1, 5.24 ERA). Hacker had been obtained in a trade with the Cubs in the offseason along with ex-Dodger Don Hoak. Dodgers manager Walter Alston started Johnny Podres (5-2, 2.04 ERA). Podres had returned to fine form after spending 1956 in military service. For this season, he had already pitched four shutouts, including his last two starts, against Pittsburgh and Philadelphia, respectively, both three-hitters.

The Redlegs broke through first in the top of the fourth inning to end Podres’ consecutive scoreless innings streak at 22.11 Wally Post opened with a walk and scored from first on Gus Bell’s double off the left-field wall.

The Dodgers had an immediate answer. Gino Cimoli and Duke Snider opened their half of the fourth with singles. With one out, Gil Hodges singled to center to tie the score at 1-1. Walker snapped the tie, duplicating his feat of the night before with a three-run homer over the right-field wall, his second of the year, for a 4-1 Dodgers lead.

The Redlegs unsuccessfully pinch-hit for Hacker in the fifth inning; by the time the Dodgers broke the game open in the sixth, Hersh Freeman was on the mound in relief. Hodges’ line-drive single, his third in a row; Walker’s infield single; and Charlie Neal’s successful sacrifice put runners on second and third. A bit of defensive strategy by Redlegs manager Birdie Tebbetts backfired after Don Zimmer was intentionally walked. Jim Gilliam cleared the bases with a triple to left-center and the Dodgers led 7-1. 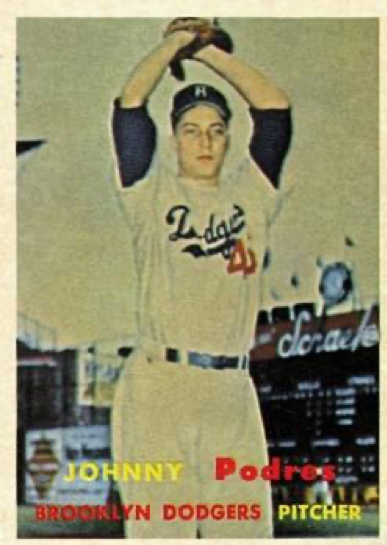 Frank Robinson, reigning National League Rookie of the Year, hit a solo home run in the eighth inning off Podres, his 10th of the year, for the final Cincinnati run. The Dodgers weren’t done, though; Walker doubled to left-center against Art Fowler in the bottom of the inning to get things started. Neal’s single scored Walker. After Don Zimmer lined out, Podres reached first on a groundout that erased Neal at second. When Gilliam walked, putting Podres in scoring position, Cimoli delivered a single for the final Dodgers’ run. The 9-2 victory was Podres’ sixth win of the season.

Both Hodges and Walker were the hitting stars of the game, each with three hits. That was old hat for Hodges. He had already done that four other times in the first 44 games of the season. For Walker, it was the second time in the season that he had three hits in a single game – and he wasn’t done.

On the very next day, the Redlegs swept a Sunday doubleheader from the Dodgers. With Campanella ready to catch one game, John Drebinger noted in the New York Times that Walker had earned a reprieve from manager Walter Alston. Drebinger wrote, “He didn’t have the heart to bench Rube Walker after Rube had touched off three blows in the opener. Walker had done some fancy swatting in this series subbing for Campy.”12 Indeed.

The Dodgers managed nine hits in the first game, a 3-1 loss to Brooks Lawrence, but had trouble scoring runs. Walker had another three-hit game off Lawrence, two singles and a double. It was the first time he had three hits in a game three times in one season since 1952. No matter that he went hitless in the second game. He had been rewarded by his manager.

The few words on the back of a baseball card tell fans the story of the season or career of the ballplayer pictured on the front. In the case of Al “Rube” Walker, only a single word is really needed for fans and teammates alike. Dependable.

How does Thomas Cogliano want us to remember his grandfather, Rube Walker – ballplayer, manager, coach, and scout?13 From the day in 1944 that he signed with the Class D Chicago Cubs farm team in Erwin (Tennessee) of the Appalachian League, he would become a “baseball lifer.”14

When Roy Campanella aggravated a hamstring injury in the first game of the 1951 National League playoff series against the New York Giants, it was Walker to the rescue behind the plate for the next two games. Catching Clem Labine and adding three hits including a home run and two runs batted in helped the Dodgers beat the Giants in Game Two, 10-0, to even the series.

In Game Three, Walker was behind the plate when Ralph Branca threw that fateful high inside fastball to Bobby Thomson that became The Shot Heard ’Round the World.15 “Catcher Walker would tell daughter Deborah that manager Dressen had called the pitch.”16

After retiring as a player, Walker managed in the minor leagues for several years before getting a call from his teammate, friend, and fishing buddy, Gil Hodges, to join him as a coach for the Washington Senators. When Hodges became manager of the New York Mets, Walker became his pitching coach and will be best remembered for instituting the first five-man pitching rotation during the Mets’ stretch drive, culminating in the 1969 World Series championship. Tom Seaver once said about his close friend and former coach, “He was a pitcher’s pitching coach.”17 Later he became a scout for the St. Louis Cardinals. That was Rube Walker, baseball lifer.

The author thanks Thomas Cogliano for providing his unique perspective of Rube Walker. The author accessed Baseball-Reference.com for box scores/play-by-play information (baseball-reference.com/boxes/BRO/BRO195706080.shtml) and other data, as well as Retrosheet.org (retrosheet.org/boxesetc/1957/B06080BRO1957.htm). The Rube Walker and Johnny Podres baseball cards (#147 and #277) are from the 1957 Topps series and were obtained from the Trading Card Database.

1 “Young Albert earned the nickname that would stay with him the rest of his life when he was batboy for the Lenoir team of the Class D North Carolina State League and his idol was the star of the team, Rube Robinson.” (Dave Williams, “Rube Walker,” SABR Baseball Biography Project).

14 Paul Dickson, The Dickson Baseball Dictionary, 3rd Edition (New York: W.W. Norton & Company, 2009), 71. “One who begins his career as a player and spends the rest of his working life as a manager, coach, scout, or executive.”

16 Joshua Prager, The Echoing Green – The Untold Story of Bobby Thomson, Ralph Branca and the Shot Heard ’Round the World (New York: Pantheon Books, 2006), 320. Prager also noted that “Dressen would allege that he had tried to whistle for the curve. Pitcher Newcombe would maintain that he had wanted to remain in the game. Even umpire Conlan would write that he had questioned Dressen about his relief. ‘Branca? A fastball pitcher?’”