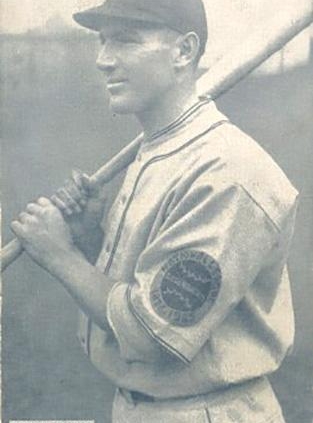 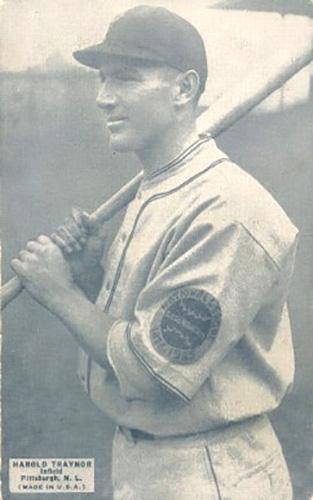 Rising prospect Pie Traynor turned heads after winning the Pittsburgh Pirates’ starting third-base job out of spring training in 1922. He began building his legend almost immediately, exemplified by the two-run 10th-inning home run against the Boston Braves on May 15 at Forbes Field that transformed impending defeat into a 6-5 Pirates’ win and heralded his long tenure of excellence in Pittsburgh.

Harold Joseph Traynor, known as “Pie” from childhood, grew up in Somerville, Massachusetts, about four miles from Boston. He had tryouts with the Braves and Boston Red Sox before the Pirates purchased his contract from a minor-league team in September 1920.1 Traynor appeared in a handful of late-season games with Pittsburgh in 1920 and 1921, sandwiched around a minor-league campaign with the Southern Association’s Birmingham Barons in 1921.

In 1922 Traynor went to spring training and won the Pirates’ third-base job from incumbent Clyde Barnhart, who had slumped in the second half of the 1921 season as the New York Giants overtook the Pirates for the NL pennant.2 “The more one sees of Traynor, the more one becomes convinced that the third base problem is about to be solved,” the Pittsburgh Sunday Post gushed.3

Manager George Gibson wrote the 23-year-old Traynor into the lineup at third, batting fifth, on Opening Day and every game for several weeks after that. On April 29 Traynor broke open a game against the Cincinnati Reds with a three-run homer off Hall of Fame-bound Eppa Rixey.4 “Whom do I consider the most dangerous batsman on the Pittsburgh team?” Reds manager Pat Moran observed.5 “From what I have seen of Traynor I am convinced that the honor belongs to him.”6

By the time the Braves visited Pittsburgh for a four-game series in mid-May, Traynor had played every inning of the Pirates’ first 23 games. Pittsburgh was among a cluster of teams already trailing the first-place Giants by several games; Boston, its pitching staff already battered seven times for 10 or more runs, was a distant eighth place.

Traynor led the charge in the series opener on May 12, tripling in three runs to overcome an early deficit and put the Pirates ahead to stay, then doubling and scoring an insurance run in a 5-3 win.7 A day later, Hank Gowdy’s grand slam lifted the Braves to victory.8

A Sunday offday, in deference to Pennsylvania’s blue laws, paused the series on May 14; the Pirates traveled to Youngstown, Ohio, to play a semipro team.9 They returned to Pittsburgh for Monday afternoon’s third game of the series.

Right-hander Whitey Glazner had been one of Pittsburgh’s most effective pitchers in 1921, his first full major-league season, but had struggled during the first month of the 1922 campaign. He missed time with an illness and lasted three innings or fewer in two of his first three starts.10

Glazner retired the first two Braves in the first inning, but former Pirate Billy Southworth singled to right and took third on Walton Cruise’s single. Another past Pirate, Tony Boeckel, drove in Southworth with a single, giving the Braves a 1-0 advantage.

Boston added to its lead in the third on three more singles. After Larry Kopf’s one-out hit, Southworth dropped a fly ball in front of Carson Bigbee in left. Kopf, a veteran shortstop acquired from the Reds in February 1922, beat Bigbee’s throw to third; Southworth alertly took second. Cruise followed with Boston’s third single in a row, and Kopf and Southworth crossed the plate to make it 3-0.

Heads-up baserunning had built the Braves’ lead, but shaky work on the basepaths prevented a bigger margin. Glazner ended the third by picking Boeckel off first. Rookie Jim Mattox, starting behind the plate for the injured Johnny Gooch, gunned down Cruise trying to steal for the final out of the fifth.11

A single and a steal put Boston’s Walter Holke on second with two outs in the top of the sixth, and Gowdy grounded to shortstop Rabbit Maranville’s right side. Maranville, a Braves mainstay until he was traded to the Pirates before the 1921 season, had no play at first; instead, he threw to Traynor at third.

Anticipating a throw to first, Holke had rounded third and headed for home. The Pirates trapped him in a rundown, and Glazner tagged him for the third out.

Boston starter Dana Fillingim seemed intent on rendering the erratic baserunning moot, at least through the first six innings. Deploying the banned spitball under league dispensation, in 1922 Fillingim was in the fifth season of a six-year tenure as a Braves’ swingman, spanning nearly 200 appearances and over 100 starts. In one of those starts, two seasons earlier, he had taken a shutout into the ninth against the Pirates before Traynor spoiled it with an RBI double, his first major-league hit.12

This time out, Traynor’s second-inning single represented Pittsburgh’s only baserunner through four innings. Charlie Grimm added a single in the fifth, and the Pirates put two runners on with two outs in the sixth, but Fillingim stranded all of them, with his spitter “working in fine style,” according to the Pittsburgh Press.13

Fillingim and the Braves took their three-run lead to the seventh, when Pittsburgh finally broke through. Traynor led off with a single off Fillingim’s glove and took third on a sharp opposite-field single to right by rookie Walter Mueller.

Grimm’s single off Holke’s glove at first drove in Traynor with the Pirates’ first run; Mueller stopped at second. After Mattox sacrificed the runners up, Gibson sent Ray Rohwer to bat for Glazner.

The lefty-swinging Rohwer had four pinch-hits in his six most recent appearances. He made it 5-for-7 by pushing a single into left, scoring Mueller and Grimm to tie the game.

Small ball soon put the Pirates ahead. Maranville bunted Rohwer to second, and Max Carey singled him home for a 4-3 lead.

Gibson summoned Moses Yellow Horse, who had earned the win in the series opener with five innings of one-hit relief; the 24-year-old right-hander pitched three more innings in the off-day exhibition. Yellow Horse retired the Braves in order in the eighth, then returned for the ninth.

The Pirates were two outs from victory after Traynor made what the Pittsburgh Gazette Times called a “great one-hand play” on Hod Ford’s inning-opening grounder, throwing across the diamond for the out.14 But the Braves rallied against Yellow Horse, who possibly was showing the strain of his recent workload.15

Gowdy doubled to right-center for what turned out to be Boston’s only extra-base hit of the game. Braves manager Fred Mitchell went to his bench, calling on Al Nixon to run for Gowdy and Lloyd Christenbury to bat for reliever Frank Miller. Christenbury singled off Maranville’s glove to push Nixon to third, and Ray Powell’s fly ball to left scored him with the tying run.

When Bigbee threw home, Christenbury took second, and the Braves were poised to go ahead. But baserunning let them down again. Maranville knocked down Kopf’s single, then saw Christenbury rounding third. He threw to Traynor for the tag, and the game remained tied.

Veteran Joe Oeschger, Boston’s third pitcher of the afternoon, retired the Pirates in order in the ninth, and the Braves went back after Yellow Horse in the 10th. Southworth led off with his third hit, a single to center. One out later, he took third on Boeckel’s single.

Holke followed with his third hit – and Boston’s 17th against Pirates pitching – scoring Southworth with the go-ahead run. Hal Carlson replaced Yellow Horse and induced Ford to hit into a double play, but the Braves took their 5-4 lead to the bottom of the 10th.

Bigbee was retired for the first out. Jewel Ens singled; Walt Hammond ran for him. Traynor came to bat, aiming to keep the rally going. Some fans moved toward the exits.16

Oeschger threw an inside fastball, and Traynor connected on a deep line drive to left. Cruise turned and ran, his back to home plate, but the ball cleared the fence by a foot. The Pirates’ first home run of the season over Forbes Field’s left-field fence had given them a 6-5 victory.17

The Pittsburgh Gazette Times reported that Traynor, realizing what he had done shortly after reaching first base, “just succumbed to his natural feelings … leap[ing] straight up and down on the base line about 15 feet off first base. Then he skipped like a school boy to second … He continued his joyous prancing up and down the line to third.”18 Traynor’s teammates greeted him at home plate, where, according to the Pittsburgh Post, he was “grabbed … and almost carried towards the dugout.”19

“Even the crowd acted differently than the fans are wont to riot when anything of a like nature occurs,” the Pittsburgh Gazette Times concluded.20 “Perhaps it was a natural response to the exceptional traits that Traynor has exemplified since he became a part of professional baseball.”21

Traynor displayed those traits over the long haul in Pittsburgh, nailing down third base for the Pirates until 1934. When he wrapped up his career in 1937, he had played in more games at third than anyone in major-league history, and he was an integral member of two championship teams, Pittsburgh’s 1925 World Series winners and 1927 NL pennant winners. Traynor was inducted into the Baseball Hall of Fame in 1948.

This article was fact-checked by Kevin Larkin and copy-edited by Len Levin. SABR members Thomas E. Merrick and Kurt Blumenau provided insightful comments on an earlier version of the article.

In addition to the sources cited in the Notes below, the author consulted Baseball-Reference.com and Retrosheet.org for pertinent information, including the box score and play-by-play. The author also relied on game coverage in the Boston Globe, Pittsburgh Post, Pittsburgh Gazette Times, and Pittsburg Press newspapers and SABR Baseball BioProject biographies for several players involved in the game, especially James Forr’s biography of Pie Traynor.

2 In 1921 the Pirates were in first place in the NL with a 7½-game lead over the Giants on August 23, but New York won 20 of its next 24 games, including seven straight over Pittsburgh, to take control of the league race. In 35 games from August 18 through September 26, Barnhart batted .175 with only three extra-base hits. “Barnhart batted like wildfire for a time and made numerous home runs [in 1921], but he fell into a slump and when this happened he also began playing a hard game at third,” the Pittsburgh Sunday Post summarized. Edward F. Balinger, “Pirate Prospects in Coming Flag Chase Not Encouraging: Must Be Stronger to Compete with Giants and Cards,” Pittsburgh Sunday Post, April 2, 1922: 3,3.