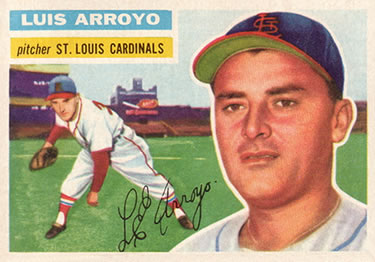 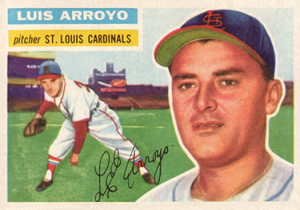 Despite his status as a budding star for the St. Louis Cardinals, a month into the 1955 season rookie pitcher Luis Arroyo longed to be home in Puerto Rico with his pregnant wife. As only the fifth pitcher in the formerly segregated major leagues to hail from Puerto Rico, he had no army of fellow countrymen around the league to lean on for support.

Luckily, he was on one of the most accepting teams in the majors. During a time that segregation ran rampant through the United States, the Cardinals were beginning to build a safe organization for minority players.

While Arroyo struggled to find his place away from home, he found solace and friendship in the team physician, Dr. Harrison J. Weaver. Before Arroyo took the mound against the Pittsburgh Pirates on May 16, 1955, Weaver had an idea of how to take him home. The doctor grabbed a mandolin and serenaded Arroyo with an impromptu version of the traditional Spanish-language song “Cielito Lindo” (Beautiful Sky) while helping prepare his muscles for that start. Arroyo pitched his first career shutout, and a new tradition was born.

“Hey Doc,” Arroyo said during the postgame celebration. “You take the [mandolin] on the [road] trip sure, eh? We’ll win 20 [games] easy.”1

Sadly, there would be no more wins together. Weaver died of a sudden heart attack five days later, on May 21. He was 69 years old.

The next day, Arroyo was sharp in 8 innings in the second game of a doubleheader against the Cincinnati Reds at Crosley Field. And on May 27, when the Reds were visiting St. Louis, Arroyo could have used Dr. Weaver’s help again – literally.

Even before pitching 6 innings to earn his fifth major-league win in as many decisions in front of a Busch Stadium crowd of 8,516, Arroyo felt discomfort in his abdomen. He attributed the pain to something he had eaten during the team’s trip to Cincinnati, but the club sent him to Jewish Hospital after the game. There it was discovered that he had the signs of acute appendicitis and would be held for observation.

Before the formal diagnosis, no one would have questioned Arroyo if he had blamed the pain on having to watch the St. Louis offense – which twice went scoreless after loading the bases with none out in his win at Cincinnati.

Losers of six of seven games during the trip to Cincinnati and Chicago, the Cardinals were mired in a slump. Clutch hits were scarce (the offense went 11-for-56 with runners in scoring position during the road trip for a .196 average), and fans were taking notice. Behind Arroyo, St. Louis was a 7-4 winner over the Reds in its return home, but that wasn’t enough to salvage manager Eddie Stanky’s job.

With management under pressure to produce a winning ballclub after eight straight years without a pennant, Stanky’s “turbulent tenure”2 was ended the next day in favor of Harry Walker, the manager of the Rochester Red Wings, the club’s Triple-A affiliate.

Stanky had been in charge of the Cardinals since 1952 – first as a player-manager, then solely as manager – but his brashness had created a rift with the fans. The number of disgruntled patrons writing letters to the ballclub and the Anheuser-Busch brewery had grown “greater than usual” with the slow start to the 1955 season.3

A rumor of Stanky’s dismissal and Walker’s promotion was plastered in an article by J.G. Taylor Spink in the edition of The Sporting News that went to press on May 27,4 to which Stanky replied, “I intend to manage in St. Louis for a good many years,”5 and that rumors were to be expected because a young ballclub “runs hot and cold.”6

Meanwhile in Rochester, Walker scurried away from the club’s Norton Street Ballpark in the sixth inning of a Red Wings-Toronto Maple Leafs game on May 27. He caught a train to attend the next day’s 2 P.M. press gathering at club President August A. Busch Jr.’s Grant Farm estate, when Stanky’s firing was formally announced and Walker was named interim manager.

It was Walker’s first managerial role in the majors, but the 36-year-old – who had played in three World Series for the Cardinals – brought with him four seasons of minor-league managing and two championships in the Junior World Series, an annual matchup of the top finishers in the International League and American Association.7

Other than bringing about a change in temperament, the managerial swap from “The Brat” to “The Hat” didn’t do much for the on-field production. Walker’s club lost 11 of its first 15 games, and overall he finished 51-67 as the Cardinals scuffled to a 68-86 mark – the franchise’s worst showing since 1919. After the season, new general manager Frank Lane replaced Walker with Fred Hutchinson, who guided St. Louis from 1956 to ’58. Walker was named manager at Double-A Houston and won two championships in the Dixie Series, the postseason series between the pennant winners of the Texas League and Southern Association. He rejoined the Cardinals as a coach in 1959 under another new manager, this time Solly Hemus, who stuck around until 1961.

Not to be forgotten in the shuffle was Arroyo, who avoided surgery and was released from the hospital the next afternoon and made his next scheduled start.

Before his hospital admission, Arroyo allowed a pair of Reds to reach in the top of the first inning, but after he struck out Wally Post to end the threat, his teammates gave him some support – with clutch hitting.

Stan Musial singled with two outs to set up a two-run home run by Rip Repulski, and Arroyo helped his own cause in the second, singling with two outs to bring home Ken Boyer for a 3-0 lead.

In the third, Red Schoendienst singled to open the inning and moved to second on Musial’s groundout. After Repulski walked, both runners advanced when Wally Moon grounded out to second and scored on Bill Sarni’s single to give the Cardinals a 5-0 advantage. St. Louis threatened to build its lead in the fourth, getting three straight two-out singles from rookie Bill Virdon, Schoendienst, and Musial to chase Reds starter Joe Nuxhall from the game, but reliever Bud Podbielan induced Repulski into an inning-ending groundout.

Arroyo had retired 12 straight from the second inning through the fifth, but Johnny Temple tagged him for a leadoff double in the sixth. After a fly out, Gus Bell moved Temple to third after reaching on an error, and Ted Kluszewski hit a sacrifice fly to center to put the Reds on the board.

Hobie Landrith touched off another Cincinnati rally in the seventh, homering to open the inning, and Roy McMillan, Stan Palys, and Temple hit three straight one-out singles. Ray Jablonski sent a sacrifice fly to center and Bell singled, cutting the St. Louis lead to 5-4 and chasing Arroyo from the game. Reliever Paul LaPalme ended the inning when he got Kluszewski to ground out.

The Cardinals responded in the bottom of the inning against new reliever Corky Valentine. Musial walked, Repulski doubled, and Wally Moon hit a two-run single to cut Valentine’s day short and push the lead to 7-4. The last 12 batters of the game were retired in order to end the night in 2 hours, 33 minutes.

Cincinnati fell to 17-20 with the loss, and Birdie Tebbetts’ club finished the season at 75-79. Tebbetts had caused a bit of a stir after Arroyo’s major-league debut on April 20. Arroyo fired 7 shutout innings against the Reds, but after the game Tebbetts said he was unimpressed by the rookie and that he would be out of the league by July.8

Arroyo took that bulletin-board material and used it to beat the Reds two more times in the season’s first two months, but Cincinnati eventually got the youngster figured out. After his hospital stay, Arroyo picked up his sixth victory on June 1 as the Cardinals won 6-2 at Pittsburgh. His fast start in the majors ended in July, after he had gone 9-2 with a 2.02 ERA through June, which helped him land a spot on the All-Star team,9 but he wasn’t in danger of being sent to the minors.

Over the final three months of the 1955 season, Arroyo pitched as a starter and a reliever, and he finished the year at 11-8 with a 4.19 ERA in his only season with the Cardinals.10 Against the Reds, Arroyo did not earn a decision in losses on July 5 and August 20. He also blew saves against Cincinnati on August 14 and September 5, but the Cardinals came back to win both games.

In addition to the sources cited in the Notes, the author consulted the Baseball-Reference.com, Stathead.com, and Retrosheet.org websites for pertinent materials and the box scores noted below. He also used information obtained from coverage by The Sporting News, the St. Louis Post-Dispatch, and the Cincinnati Enquirer.

7 Taking over the Red Wings in Rochester was Walker’s older brother, Dixie. Dixie Walker was serving as a coach on Stanky’s major-league staff, but he was replaced by Lou Kahn, who came to the Cardinals from Rochester with Harry Walker.

9 Arroyo did not pitch in the National League’s 6-5 victory over the American League. He later made another All-Star appearance with the New York Yankees in the second game of 1961 but didn’t see the mound in that game either.

10 Arroyo was traded to the Pirates in May 1956 in exchange for Max Surkont. After his stint with Pittsburgh, he went to the Reds and Yankees, and he appeared in two games to help New York win the 1961 World Series.