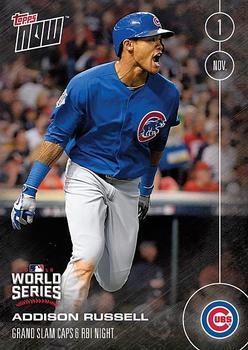 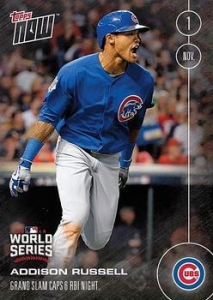 The Cleveland Indians fans among the crowd of 38,116 at Progressive Field were looking for the Indians’ first World Series championship since Larry Doby, Bob Feller, and Satchel Paige led Cleveland to the title in 1948. The Indians brought a three-games-to-two lead into Game Six, putting them just one win away from the championship that had eluded the franchise during World Series appearances in 1954, 1995, and 1997.

The Cubs were facing down history of their own. They had won their first NL pennant since 1945 and were seeking their first World Series title since 1908, 108 years earlier. They were also trying to join the 1979 Pittsburgh Pirates and the 1985 Kansas City Royals to come back from a three-games-to-one deficit. Only three previous teams had ever completed the comeback by winning the last two games on the road,1 and only five teams had ever come back from that deficit to win the World Series.2

Josh Tomlin had the opportunity to close out the World Series after the Indians were unable to do so in Game Five. The 32-year-old right-hander entered the game without a loss in the 2016 postseason. He had beaten the Boston Red Sox in Game Three of the American League Division Series, then the Toronto Blue Jays in Game Two of the Championship Series. Tomlin had faced the Cubs in Game Three at Wrigley Field, the first World Series game in the “Friendly Confines” in 71 years. He went only 4⅔ innings, allowing two hits with one strikeout, but received a no-decision in Cleveland’s 1-0 win.

Tomlin entered Game Six on only three days of rest, his fewest during the 2016 season.3 He retired the first two Chicago hitters but ran into trouble with the third hitter, Kris Bryant. Bryant, who was named NL Most Valuable Player after the World Series, delivered Tomlin’s 0-and-2 pitch into the left-field seats to give the Cubs a 1-0 lead.

Chicago kept up the pressure. Anthony Rizzo drove a liner to center for a single, and Ben Zobrist followed with a line-drive single to left that moved Rizzo to third. Addison Russell slapped a fly ball to right-center field that fell between Tyler Naquin and Lonnie Chisenhall for a double, scoring both Rizzo and Zobrist for a 3-0 Chicago lead. The Cubs jumped on Tomlin early in each at-bat, as only one of their seven batters in the first inning saw more than four pitches.

The Cubs gave the ball to Jake Arrieta, who had followed his 22 wins and NL Cy Young Award of 2015 with an 18-win campaign in ’16. He was making his fourth start of the postseason. After a no-decision in Game Three of the NLDS, Arrieta was the losing pitcher in Game Three of the NLCS, a 6-0 loss that gave the Los Angeles Dodgers a two-games-to-one lead over the Cubs. Chicago rebounded with three straight wins, wrapping up the pennant and giving Arrieta another postseason chance in Game Two of the World Series. There, the 30-year-old right-hander turned it around, allowing only one run on two hits in 5⅔ innings to earn his first win of the postseason.

Arrieta gave up a two-out walk to Francisco Lindor in the first but got out of the inning without giving up a hit, while recording two strikeouts. He picked up two more strikeouts in a one-two-three second inning.

Kyle Schwarber,4 who became the first position player in MLB history to get his first hit of the season in the World Series in Game One,5 drew a walk to start the third inning for the Cubs. One out later, back-to-back singles by Rizzo and Zobrist loaded the bases. With Russell due up, Cleveland manager Terry Francona replaced Tomlin with Dan Otero.

Russell drove Otero’s 2-and-0 pitch into the center-field seats for a grand slam.6 The Cubs had broken the game open with a 7-0 lead.

Arrieta got through the bottom of the third with only 11 pitches, picking up his fifth strikeout. The Indians brought in Danny Salazar to pitch in the fourth. He nearly matched Arrieta that inning with 13 pitches and two strikeouts.

In the fourth inning the Indians began to get to Arrieta. Jason Kipnis started with a leadoff double. After Lindor struck out, Mike Napoli hit a single to center field, driving in Kipnis to make it 7-1. Jose Ramirez lined to right for the second out. Chisenhall was hit by a pitch, moving Napoli to second. The first pitch to Coco Crisp got past Willson Contreras, allowing the runners to advance, and a four-pitch walk to Crisp to load the bases. But Arrieta fanned Naquin for his seventh strikeout, ending the Cleveland threat.

Arrieta recorded his eighth strikeout in the fifth but also gave up a solo home run to Kipnis, traveling 387 feet, to make the score 7-2.7

Arrieta finished his night in the sixth inning. After striking out Napoli and getting José Ramirez to line out to right, Arrieta walked Chisenhall. Manager Joe Maddon made the call to bring in Mike Montgomery, who got the third out. Arrieta gave up two runs on three hits and three walks in 5⅔ innings with nine strikeouts.

Schwarber reached base for the second time and Bryant got his third hit of the night in the top of the seventh, but the Cubs did not add to their lead.

Kipnis also got his third hit, a single, in the bottom of the inning. Maddon brought in closer Aroldis Chapman, a decision that led to much debate after the game.8 Why bring in Chapman with the game seemingly in hand? Game Six was the 28-year-old right-hander’s fourth appearance in the World Series. He had thrown 42 pitches during a 2⅔-inning save in Game Five two nights prior, nearly double his previous career high. Also, why bring him in during the seventh inning, much earlier than usual?

“I brought him in earlier because that was the part of the order he had to get out,” Maddon said in postgame remarks. “I did not want the game to get away at that particular moment. So that worked out well.”9 Maddon added, “If we don’t get through that, there is no tomorrow.”10

Chapman got the last out of the seventh and pitched a complete eighth, preserving the Cubs’ lead.

In the top of the ninth, Bryant singled to left for his fourth hit of the game. Rizzo hit a home run to right field to extend the Cubs’ lead to 9-2.

With Pedro Strop loosening in the bullpen, Chapman came back in the ninth to face one hitter, a five-pitch walk to Brandon Guyer.11 Strop got Rajai Davis to fly out to left. After a wild pitch moved Guyer to second, Roberto Perez hit a single to right, scoring Guyer, but Perez was thrown out at second by Jason Heyward for the second out. After a walk, Strop was lifted and Travis Wood was brought in to get the final out. Kipnis popped out in foul territory on the third-base side to end the game.

The bright lights of the World Series were not too much for Russell, “Being part of the Cubs, you’re put in the limelight, and early on you’re forced to deliver whenever the game’s on the line,” he said. “You definitely learn to control those feelings, so you’re able to see the ball and able to think about pitch counts and all that stuff. Throughout the whole season I kind of practiced it.”14

Besides Russell, the duo of Rizzo and Bryant — “Bryzzo,”15 as they came to be known — also contributed significantly to Chicago’s win. They combined for seven hits, two home runs, 13 total bases, three RBIs, and five runs.16

The Chicago victory forced the two teams with the longest active World Series droughts to play a winner-take-all Game Seven.

In addition to the sources cited in the Notes, the author consulted Baseball-Reference.com and Retrosheet.org. A replay of the game was also viewed on YouTube.

3 Tomlin made 15 regular-season starts and 1 postseason start on four days of rest.

4 Schwarber was not expected to play in this World Series. On April 7, he had suffered a knee injury on a collision with teammate Dexter Fowler; doctors questioned whether he would be cleared to play by the winter-league season. Schwarber made his improbable return in game one of the World Series. Because he was not cleared to play defense, he was limited — with the exception of a Game Three pinch-hitting appearance in Chicago — to playing designated hitter in games in Cleveland, the American League city. Schwarber was not as significant in Game Six as Russell, Rizzo, and Bryant, but his impact on the World Series was undeniable. He finished the series with a .412/.500/.471 slash line and a .971 OPS in 20 plate appearances.

6 It had a game-high exit velocity of 108 MPH with a launch angle of 23 degrees “Chicago Cubs at Cleveland Indians, “Baseball Savant, November 1, 2016. https://baseballsavant.mlb.com/gamefeed?date=2016-11-01&chartType=pitch&legendType=pitchName&playerType=pitcher&inning=&count=&pitchHand=&batSide=&descFilter=&ptFilter=&resultFilter=&hf=exitVelocity#487636.

16 Anderson & Perry. Rizzo put the ball in play in each of his five at-bats and four of those were considered “hard-hit” by Statcast, which designates any hit with an exit velocity of 95 MPH or more as hard-hit. Anderson & Perry. Bryant also put the ball in play in his five at-bats with three of the five being hard-hit, including his first inning home run that had an exit velocity of 106.2 MPH. Baseball Savant.