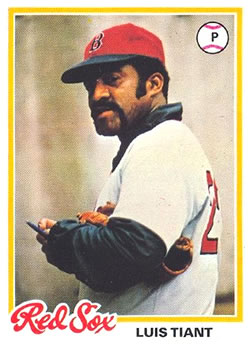 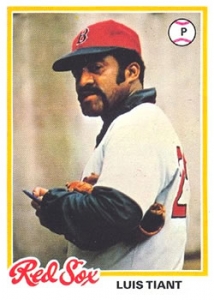 In an episode of Cheers, former Red Sox relief pitcher Sam Malone, played by actor Ted Danson, appears in a beer commercial to save Luis Tiant after the hurler with a corkscrew windup flubs his lines. Tiant’s subpar performance is part of the script. Malone exclaims, “Another save!”1

Although Malone is a fictional character, the scene indicates times when even the best pitchers need an assist from their bullpen brethren. No such relief was needed on October 1, 1978, when Tiant restricted the Toronto Blue Jays to two hits in a 5-0 shutout.

But this game was not merely another entry in Boston’s win column.

It happened on the last day of the season at Fenway Park, effecting a tie with the Yankees for the American League East pennant.

Then in the last year of his five-season career in the majors, Toronto right-hander Don Kirkwood kept the Red Sox stagnant at the beginning. For the first two innings, the home team went three up, three down. Vulnerability manifested in the bottom of the third; Kirkwood walked George Scott and Jack Brohamer after Butch Hobson grounded out to third baseman Roy Howell.

Rick Burleson smacked a pitch fielded by Toronto center fielder Rick Bosetti, who fired it to Howell for the force out of Scott; Brohamer took second base. Jerry Remy’s grounder to second baseman Dave McKay resulted in Burleson getting forced out.

Howell notched the first hit for the Blue Jays off Tiant, a two-out single in the top of the fourth inning.

In the bottom of the fifth, Boston broke the deadlock with two runs. Hobson’s single and Scott’s arrival on first base thanks to McKay’s error put runners at the corners. Brohamer’s grounder to McKay forced out Scott; Hobson scored.

John Mayberry got the second hit for the Blue Jays, a one-out single in the top of the seventh. Boston padded its lead with two more runs in the bottom of the seventh when Brohamer drew a two-out walk and Burleson cracked a home run.

Rice’s solo homer in the bottom of the eighth made the score 5-0. For the second year in a row, Rice led the AL in home runs.3 His 1978 total also stood atop the major leagues as did his numbers for plate appearances, at-bats, hits, triples, and RBIs. It was no surprise that Rice won the year’s American League MVP Award.4

Tiant was masterful against Toronto’s lineup, allowing no walks. He notched four strikeouts, which brought his season total to 114. According to Red Sox pitching coach Al Jackson, excellence was expected: “Why did he pitch so well? Because the chips were down, that’s why. You couldn’t ask for a better man today than Luis Tiant.”5

Boston’s victory exemplified the importance for a team to have depth of talent. Carl Yastrzemski, Carlton Fisk, Fred Lynn, and George Scott went 0-for-4.

Fisk praised his batterymate’s performance: “He was pitching good when the score was 0-0. But with a 2-0 lead, you could see a big difference. It seemed like on every pitch he’d spin around and look at the scoreboard before he pitched. He had some good stuff.”6

Beating the Blue Jays punctuated the recent compilation of wins for the Red Sox. From August 30 to September 16, their record was 3-14. Since then, a 12-2 tear.

It also extended the season by one game.

While Red Sox Nation anticipated a win as Tiant took the mound in the top of the ninth, the Yankees faced a seven-run deficit in Cleveland. Rick Waits threw a complete game for a 9-2 win over New York; Tiant finished his tour de force a few minutes after the Yankees-Indians game ended. It gave him a won-lost record of 13-8 and his fifth shutout of the year.

At 37, Tiant was at an age when it’s common to see pitchers descending in quality. His outing proved otherwise. “All this crap about my age, it makes no difference anymore,” declared the Cuban native. “I have the ability and I can do as well as anyone. Not better, just as well. It makes no difference how many years I pitch.”7

But it should be noted that he faced a last-place team with a season record of 59-102. No Blue Jay with more than a handful of appearances in the field hit above .270. Rico Carty, exclusively used as a designated hitter in the next-to-last season of his 15-year career, batted .284.

In his autobiography Son of Havana: A Baseball Journey from Cuba to the Big Leagues and Back, Tiant recounted the game’s finish: “The final Toronto batter of our game was Roy Howell. I jammed him with a rising fastball, and he sent it straight up and to the left of third base. [Third baseman] Brohamer settled under it in foul ground and was already jumping for joy by the time he caught it.”8

New York’s loss and Boston’s win tied the AL East rivals at 99-63 for the season and forced a one-game playoff at Fenway Park. It was quite a journey — the Red Sox had led the AL East with a 14-game cushion in July. The Yankees won the playoff 5-4 and proceeded to defeat the Dodgers for their 22nd World Series title.

It took 2 hours and 11 minutes for the Red Sox to win their 99th game of an amazing baseball season that saw Tom Seaver throw the only no-hitter of his career; Bob Forsch toss the first of his two no-hitters; Ron Guidry strike out 18 batters in one game; Willie McCovey hit his 500th home run; Gaylord Perry enter the 3,000-strikeout club; and Pete Rose get his 3,000th hit plus tie Wee Willie Keeler’s NL hitting streak of 44 consecutive games.

After the ’78 season, Tiant left Boston for the rival Yankees and compiled a 21-17 record over two seasons. Though used sparingly, Tiant had two more years in “The Show,” each with a different team. His ’81 record with the Pirates was 2-5 with nine games started; in 1982 he started six games for the Angels and finished with a 2-2 record to close out a wonderful career and a 229-172 won-lost account.

Tiant’s journey included leading the AL in shutouts three times and the majors twice. In 1968 and 1972, he had the lowest ERA in the American League; his 1.91 figure surpassed all other major-league hurlers for the latter year.

But for the 29,201 attendees at Fenway Park on October 1, 1978, they might point to his performance that afternoon as his finest moment.

4 Rice almost won the Triple Crown.  He placed third in the AL for batting average.

8 Luis Tiant with Saul Wisnia, Son of Havana: A Baseball Journey from Cuba to the Big Leagues and Back (New York: Diversion Books, 2019), 243.