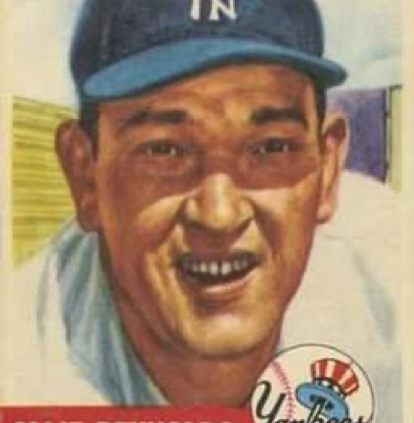 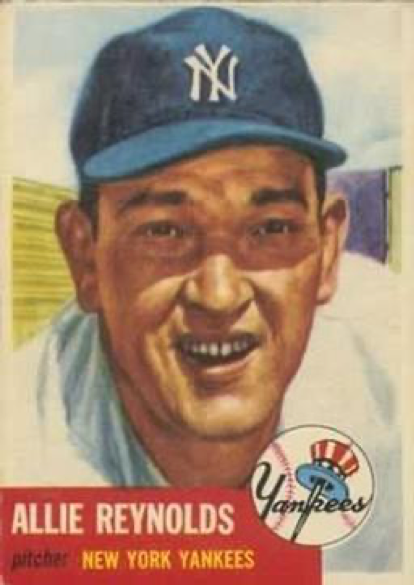 “Of all the skills wrapped up in the complex game of big league baseball, none is practiced with more ingenuity and less publicity than the fine art of diamond larceny.” – Martin Abramson1

A wiring system sending signals to an in-ground junction box and a vibrating device or maybe a telescopic sight from a World War II naval ship. Props from a thrilling spy novel or movie of intrigue and subterfuge? Neither, but rather from baseball’s sign-stealing history books that are as old as the game itself.2

But sign-stealing needn’t involve equipment, props, or technology. Perhaps a runner on second base is peering into home and deciphering the pitch selection signals by the catcher. Maybe the pitcher is tipping his pitches unbeknownst to him or his teammates. It might even be sharp sensory skills of vision and hearing detecting signals from the coach’s box or dugout. Let’s tell a story about a ballgame, Game Four of the 1952 World Series, and interject an example of “diamond larceny” at a pivotal point in the game.

The Dodgers returned to the World Series after agonizing defeats on the very last day of the season cost them the National League pennant in 1950 and 1951.3 By many measures, the Dodgers had the best offense in major-league baseball in 1952.4 They missed the pitching of Don Newcombe, who was serving in the military. Their All-Star pitcher had won 20 games in 1951 while logging 272 innings on the mound. However, they had pitcher Joe Black (15-4, 2.15 ERA), NL Rookie of the Year. Black saved 15 games, finishing more (41) than any other pitcher in the major leagues. Black started only twice in 56 regular-season appearances, both in the last week of the season.

With the Dodgers leading the series two games to one, the pitching matchup in Game Four was a reprise of Game One, Black vs. Reynolds. Three Dodgers home runs and a complete game six-hitter by Black gave the Dodgers a 4-2 victory in that game.5 Raschi’s three-hitter in Game Two evened the series, but the Dodgers’ 11 hits and the pitching of Preacher Roe in Game Three restored Brooklyn’s advantage. Yankee Stadium and 71,787 fans were ready for Game Four.

The Dodgers challenged Reynolds at the outset. With one out in the top of the first, Pee Wee Reese singled to center. When Duke Snider hit a sharp grounder to second baseman Billy Martin’s right, an awkward and errant throw put runners on first and third. In a portent of things to come, Reynolds caught Jackie Robinson looking at a third strike and struck out Roy Campanella swinging, stranding the runners.

The Yankees responded against Black with their first hit in the second inning when Gene Woodling doubled down the left-field line with one out. Black retired both Hank Bauer and Martin on groundballs to end that threat.

The Yankees finally jumped ahead in the fourth when Johnny Mize opened the inning with a towering solo homer deep into the lower stands in right. In the twilight of his career, Mize had hit his first postseason home run in Game Three against Roe as a pinch-hitter in the ninth. These home runs reminded fans of what New York Times columnist Arthur Daley said about Yankees general manager George Weiss’s insurance-policy purchase of Mize from the Giants in 1949. “Every year at this same approximate time they buy one and then cash it in with dividends in October.”6

At a pivotal point in the game, with the Yankees holding a 1-0 lead, Andy Pafko opened the top of the fifth with a single to left. Still looking for his first hit of the series, Gil Hodges walked and Carl Furillo’s well-placed sacrifice advanced the runners to second and third. Black came to the plate with two runners in scoring position. 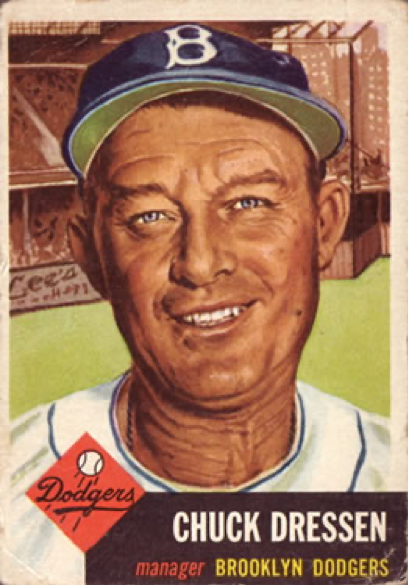 From the visiting dugout, Dressen flashed the squeeze-play sign. As Reynolds was about to deliver on a 1-and-1 count, Pafko started streaking home from third. Reynolds’ fastball was intentionally low and outside. Black could not reach the pitch, but Yogi Berra did and when Pafko suddenly stopped well up the line, Berra tagged him out.7

It wasn’t even close. Why? Did Dressen forget that Billy Martin had played for him in 1949 in Oakland in the Triple-A Pacific Coast League and knew the squeeze-play sign? In fact, Dressen had an eager pupil in the 21-year-old Martin at the time and Dressen happily schooled him in the intricacies of sign-stealing.8 As rapidly as a slickly fielded double-play ball, another sign was flashed, Martin-to-Berra-to-Reynolds, and Pafko just never had a chance. Arthur Daley of the New York Times described it best: “Yogi scooped it in his glove and left home plate with the alacrity of Jesse Owens bursting off the starting blocks on his way to an Olympic championship. He darted down the line and Pafko was a dead duck.”9

In the sixth, Mize tried to spark a rally for an insurance run when he opened with a liner to right that bounced into the stands for a ground-rule double. But Black was up to the task when Berra flied out to center and neither Bauer nor Martin came through after an intentional walk to Woodling.

As the game moved to the bottom of the eighth, it wasn’t as if Reynolds really needed any insurance runs. After all, since the Dodgers disaster in the fifth inning, they had managed only one hit, a single of little consequence by Furillo in the top of the inning. No matter. With reliever Johnny Rutherford10 on the mound, Mickey Mantle smashed a drive over Snider’s head in center. As Reese tried to nab Mantle at third, the relay sailed into the Dodgers’ dugout. Mantle was waved home by the umpires and the Yankees had a 2-0 lead.

Reynolds retired the side in order in the ninth inning – Snider, Robinson, and Campanella. In fact, Robinson struck out looking for the third time in the game. For Reynolds, the four-hitter was his fifth victory in World Series play, the most by any active pitcher.11 He struck out 10 batters, half of whom were named Robinson or Campanella. The Yankees had evened the series.

The events in the fifth inning were described in several ways by the New York press. The New York Times reported the sign-stealing and Pafko’s ill-fated dash home as noted above.12 The Brooklyn Eagle lamented Black’s inability to squeeze Pafko home and debated Dressen’s strategy that included the manager’s postgame interview with the press without any mention of the sign-stealing.13 In fact, Reynolds didn’t acknowledge the sign-stealing in the clubhouse after the game. He told reporters, “[Even] Rizzuto couldn’t have bunted that one,” alluding to the feeling that Phil Rizzuto was the best bunter in baseball.14

The irony of what happened in Game Four became apparent to readers of The Sporting News five years later. As part of a promotional buildup for the 1957 World Series, Gillette, The Sporting News, and a six-man committee held a contest among the baseball writers to name the three best sign-stealers since the end of World War I.15

The committee selected 12 candidates and a top-three – former Tigers manager and current Red Sox coach Del Baker, former Phillies manager and Yankees coach Art Fletcher, and, as it happened, Charlie Dressen.16 Each of the 484 sportswriters who voted received a Gillette razor and those who matched the committee’s choice for a top-three received a transistor pocket radio.

Committee member Frederick Lieb wasn’t surprised by the results of the contest at all. “Dressen has long been known as one of the bright boys of baseball. … He always knew what was going on.”17

The stories of Dressen’s sign-stealing skill have since become part of baseball folklore. One supposedly occurred at a now half-forgotten All-Star Game as his team worked on their signals before the game. He interjected, “Forget it. I’ll give each of you the ones used on your own team.”18 Dressen himself figured that his sign-stealing skill added nine victories per season to the Dodgers’ total.19

Indeed, on this day in the top of the fifth inning, the tables were turned on Charlie Dressen, sign-stealer extraordinaire.

Yankee fans will most certainly remember the Game Seven clincher.22 The sentiment surrounding another title by the Yankees was expressed the following day in rookie sportswriter Roger Kahn’s first line on the front page of the New York Herald Tribune – “Every year is next year for the Yankees.”23

In Brooklyn, this World Series is remembered for the batting slump (0-for-21) of one of their own, Gil Hodges. His slump extended well into the 1953 season and that story is told in another Games Project essay by this author.24 Gil Hodges was revered in Brooklyn. His teammate, Carl Erskine, put it best, noting that perhaps Hodges’ greatest record remains unofficial. “He was never booed at Ebbets Field (must be the only one).”25

This essay was fact-checked by Laura Peebles and copy-edited by Len Levin.

The author accessed Retrosheet.org (retrosheet.org/boxesetc/1952/B10040NYA1952.htm) and Baseball-Reference.com (baseball-reference.com/boxes/NYA/NYA195210040.shtml) for box scores/play-by-play and other data. Allie Reynolds baseball card #141 and Charlie Dressen baseball card #50 are from the 1953 Topps series, obtained from the Trading Card Database. As for the back of the cards, Reynolds’ stellar 1952 season is statistically documented, but Dressen’s sign-stealing skills are not.

6 Arthur Daley, “Sports of the Times: Pennant Insurance,” New York Times, August 31, 1951: 22. In writing about the late-August 1951 trade for pitcher Johnny Sain from the Boston Braves for Lew Burdette and cash, Daley was also reflecting on the similar late-season Yankees acquisitions of Mize from the Giants (1949) and Johnny Hopp from the Pirates (1950).

10 Rutherford played only one season in the major leagues and recorded a 7-7, 4.25 ERA pitching line in 1952. This World Series appearance in Game Four was his last one for the Dodgers.

17 Lieb. Lieb was an early member of SABR and wrote “Baseball Is Still the National Sport” in the first Baseball Research Journal. He was honored with SABR’s Henry Chadwick Award in 2013.

20 Mize would later tell readers of his book, How to Hit, that this home run off Carl Erskine was one of his biggest thrills in baseball. Johnny Mize and Murray Kaufman, How to Hit (New York: Henry Holt and Company, 1953), 78, 98.