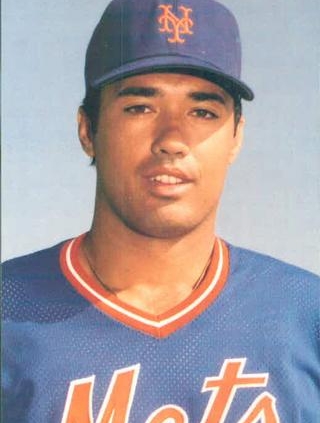 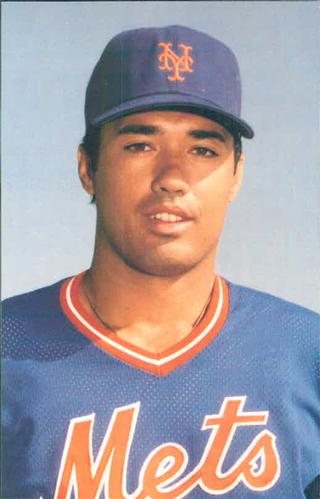 The mighty New York Mets held a 19-game lead over their closest National League East competition, the Philadelphia Phillies, at the start of September 1986. But the Mets, trying to stay in top shape for the playoffs, didn’t slack off the rest of the way. From September 1 to the end of the season, they played at a 21-11 pace – good for a .656 winning percentage, not far off the team’s full-season winning percentage of .667.

On October 5, as the last game of the regular season loomed, the only unsettled order of business was the precise extent of the New Yorkers’ divisional dominance. Manager Davey Johnson’s team had already set franchise records for wins,1 runs, hits, doubles, home runs, extra-base hits, and RBIs.2 That day’s crowd of 32,170 at Shea Stadium also lifted the Mets to a season attendance of 2,762,417 – not just a Mets record, but a record for any New York City baseball team.3 The Mets had wrapped up the division title on September 17 against the Cubs.

New York entered the day with a 107-54 record, 21½ games up on Philadelphia. They had won eight of their previous 10 games, including a doubleheader sweep the day before. On the Mets’ game broadcast on WOR-TV, announcers Ralph Kiner and Tim McCarver started the pregame show by looking ahead to the impending National League Championship Series against the Houston Astros, effectively framing the final game of the season as almost an afterthought.4

The Mets’ opponent that afternoon was the Pittsburgh Pirates, skippered by rookie manager Jim Leyland. Pittsburgh had lost on Opening Day to the Mets on April 8, and 15 of the 16 games between the teams since then. The Pirates brought a 64-97 record into the game and sat in last place, 43 games back. Their performance actually represented an improvement over 1985, when Chuck Tanner’s final Pittsburgh team finished with a 57-104 record. By the start of the 1990s, Leyland would mold the team into a contender, but those days were still in the distant future in October 1986.

A few key participants of the talented early 1990s Pirates were already on the team’s roster, including three starters – rookie center fielder Barry Bonds, rookie third baseman Bobby Bonilla, and first baseman Sid Bream. Others in the Pittsburgh lineup were nearing the ends of their careers. Shortstop U L Washington played only 10 more games after 1986, while second baseman Sam Khalifa appeared in only five.

Leyland’s lineup also included an inexperienced battery of 22-year-olds. Catcher Ruben Rodriguez was making the second appearance, and first start, of a four-game career. He’d made his debut as a defensive replacement on September 15. Left-hander Hipolito Peña was pitching the 10th game of his big-league career, making his first start. He entered the game with an 0-2 record and a 7.36 ERA. Peña had last pitched on September 26 against the Mets, who touched him for a run in two innings.

By contrast, the Mets trotted out a full lineup of regular starters – though some departed the game early, giving an opportunity to youngsters like shortstop Kevin Elster, catcher Ed Hearn, first baseman Dave Magadan, and center fielder Stan Jefferson. Howard Johnson, who usually appeared at third base or shortstop that season, got the start in left field. It was Johnson’s only game in the outfield that season. “HoJo” made 217 outfield appearances over a 14-year career, but many of them came later in his career, in the first half of the 1990s.

Hawaii-born righty Ron Darling got the start for the Mets, with a 14-6 record and a 2.87 ERA, fifth-best in the NL.5 He’d pitched against Pittsburgh only once that year and lost, giving up four runs in six innings of work in the first game of a doubleheader on June 6. The Pirates won 7-1. That game proved to be the Pirates’ only victory over the Mets in 18 games in 1986, just the third time in the team’s long history that it had beaten an opponent only once during a season.6

Pirates left fielder Joe Orsulak led off the game by looping a single to center. The Mets erased Orsulak on a close strike-’em-out, throw-’em-out double play with Washington at the plate. Bonds, ominously swinging a sledgehammer in the on-deck circle,7 drew a walk, but Bream struck out on a changeup.

The Mets made the most of their chances in the bottom half. With one out, second baseman Wally Backman reached on an error by Washington. Peña, who had nearly hit leadoff man Lenny Dykstra,8 plunked Keith Hernandez in the shoulder with a pitch – briefly raising concerns of an injury to the star first baseman before he rose and took first base. Catcher Gary Carter came to the plate with 102 RBIs, needing three to tie the team record then held by Rusty Staub. On an 0-and-2 pitch, Carter tattooed the ball over the 396-foot marker in left-center field, tying Staub’s record9 and giving the Mets a 3-0 lead.10

Peña got the next two outs and was yanked, with six Pirates relievers sharing mound duties the rest of the way. After the game, Leyland told reporters the young pitcher had been “excited,” adding, “I wanted to get him out of there before he hurt somebody. [The Mets] earned the right to go to the playoffs healthy.”11

Pirates lefty John Smiley won 20 games for Pittsburgh five seasons later. But in 1986 he was a 21-year-old September recall direct from the Class A Carolina League, a rookie reliever appearing in his 12th major-league game, and New York treated him roughly in the fourth. Right fielder Darryl Strawberry walked and stole second, and third baseman Ray Knight clouted his 11th homer into the left-field bullpen for a 5-0 Mets lead. The WOR-TV game broadcast showed Knight’s season numbers against the Astros during his at-bat against Smiley,12 again treating the day’s game as a mere formality.

Righty reliever Ray Krawczyk surrendered the game’s final four runs in the fifth inning. With one out, replacement second baseman Tim Teufel walked. Magadan singled on a fly ball that left fielder Mike Diaz lost in the sun. Carter chopped a ball over the pitcher’s mound that Khalifa couldn’t handle, loading the bases. Strawberry, the team leader in home runs, unleashed his 27th homer of the year into the right-field bullpen to give New York a 9-0 lead. It was the third grand slam of Strawberry’s career and his only slam of 1986. The Mets’ offense simmered down over the final three innings against relievers Barry Jones, Pat Clements, and Don Robinson.

The Pirates’ offense can be easily summed up: They mustered very little. Darling worked five innings, giving up another single to Bronx native Bonilla in the second and a walk to Bonilla in the fourth.13 Fellow Hawaiian Sid Fernandez, making his only relief appearance of the season against 31 starts, pitched four mop-up innings of relief and got a save. He scattered two harmless singles to right fielder and Brooklyn native Benny Distefano in the seventh and Washington in the ninth. The Pirates advanced only two runners to second base, and neither one crossed the plate.

The game ended on one final note of triumph for New York. As Bonilla came to the plate with two out, Fernandez stood at 199 strikeouts for the season, one behind team leader Dwight Gooden. On a 2-and-2 count, Fernandez froze Bonilla with a curve across the plate for strike three. The Mets streamed onto the field as yet another team member celebrated a milestone achievement.14 The players tossed their caps into the crowd as fans chanted, “We want Houston!”15

The Pirates, meanwhile, were left to mull over milestones not reached. Second baseman Johnny Ray entered the game two RBIs short of his goal of 80. Leyland planned to pinch-hit Ray if the Pirates got two runners into scoring position, but they never did.16

New York news coverage quoted the Mets’ generally cautious assessments of the coming League Championship Series. Knight, a former Astro, was most confident: “If we play the way we are capable of, it’s going to be a short series. They are not as good a ballclub as we are.”17 Either the Mets didn’t play to their potential or Knight underestimated the Astros; the Houston club fought hard in a see-saw series that was tied after four games. The Mets claimed a pair of epic extra-inning nailbiters in Games Five and Six to send them to their date with destiny against the Boston Red Sox in the World Series.

The author also viewed a YouTube video with condensed game action from the WOR-TV broadcast, which is cited in the notes.

7 Pirates legend Willie Stargell also warmed up with a sledgehammer while on deck.

12 .188, one home run, four RBIs. True to form, Knight hit .167 in six games in the League Championship Series against Houston.

13 Bonds also reached in the fourth on an error by second baseman Wally Backman.