For the second year in a row, Boston won the pennant in 1916, by just two games over the Chicago White Sox and four over the Detroit Tigers. As in 1915, the Red Sox’ World Series home games were played at Braves Field, but this time Boston faced the Brooklyn Robins (later, Dodgers).

The Red Sox presented a similar but not identical team to that of the previous year. Bill Carrigan remained as manager, but Tris Speaker was traded away, and Smoky Joe Wood was injured. George Herman Ruth emerged as the ace on the pitching staff (23-12, 1.75 ERA), while Dutch Leonard and Carl Mays each won 18 games. All in all, the staff ERA was 2.48, slightly worse than the 2.39 of the previous year. Team batting was off marginally, too – the 1915 team average was .260 (.336 OBP) while in 1916 it dipped to .248 (.317 OBP), decent numbers in the era of the dead ball. Run production dropped from 668 runs to 548. Still, the Red Sox had done what they needed to do; they won the pennant.

This was an over-confident team, and there was talk in the papers about the Sox sweeping Brooklyn.

Game One opened in Boston, with Ernie Shore against Rube Marquard (who’d opposed the Red Sox in the 1912 Series for the Giants, but was now pitching for Brooklyn). The game turned into a 6-5 win when the Red Sox managed to shut down a four-run rally in the top of the ninth before the Robins could tie the game.

Game Two pitted Red Sox ace Ruth against Sherry Smith, both southpaws. Ruth’s 1.75 ERA had led the American League. Smith was 14-10, with a 2.34 ERA. Brooklyn batted first and didn’t wait long to put a run on the board. After Ruth retired the first two Robins, center fielder Hi Myers drove a ball between Tilly Walker in center and Harry Hooper in right, sparking a Keystone Kops moment. Hooper dove but the ball rolled all the way to the fence and Walker fell trying to field the rebound. Myers legged all the way around the bases for an inside-the-park home run.

Brooklyn’s moundsman Smith doubled to right field with one out in the top of the third, and was waved toward third, but Hooper threw the ball to Walker, the cutoff man; the center fielder fired a strike to third and cut down Smith. The score remained 1-0, Brooklyn.

Boston tried to answer in its half of the inning. Everett “Deacon” Scott led off with a triple to the cement wall in right field. He had to hold at third on Pinch Thomas’s grounder to George Cutshaw at second. Ruth grounded to Cutshaw, too, but this time the second baseman bobbled the ball. Though Ruth was thrown out on the play, Scott scored to even things at 1-1. After that, both teams put men into scoring position at times but neither brought them home. In the fifth Brooklyn’s shortstop Ivy Olson was accused of tripping Pinch Thomas as he rounded second and the umpire awarded Thomas third base on interference. But Thomas languished there when Ruth struck out. 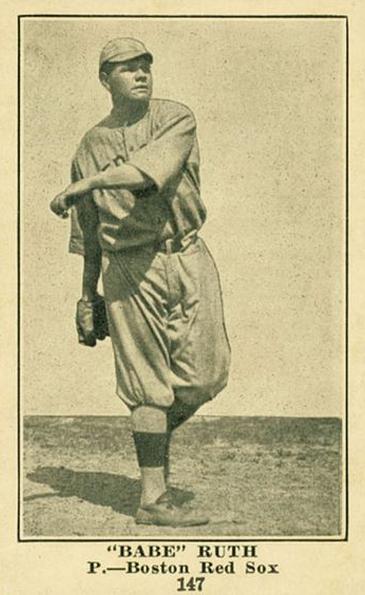 In the eighth Brooklyn again feinted. Harry “Mike” Mowrey singled, moved to second on a sacrifice, and moved up when Otto Miller singled. But Walker fired so fast to the plate that Mowrey had to stop at third, Miller taking second on the throw. With runners at second and third, and just one out, the pitcher Smith grounded to short and Scott luckily caught Mowrey in a rundown between third and home, Ruth making the tag. Jimmy Johnston hit a high bounder and Ruth leapt up to grab it, threw to first, and snuffed the threat.

The score remained tied as Boston came to bat in the bottom of the ninth. Hal Janvrin doubled to lead off for a promising start. Jimmy Walsh, pinch-hitting for Walker, managed only a comebacker. Smith fielded the ball and tossed to Mowrey to cut down the lead runner, but Mowrey dropped the ball and Janny was safe. With runners on first and third and no one out, the crowd was on the edge of their seats. Even a fly ball could score Janvrin. Dick Hoblitzell got that fly to center, but Myers’ throw home erased Janvrin, two outs on one play. After an intentional walk to Duffy Lewis, Larry Gardner fouled out to send the game into extra innings, still tied 1-1.

The Red Sox escaped a couple of potential problems in the top of the 10th as a deflected grounder was converted into an out and a walk went for naught, and looked once again to push across that one crucial run. Scott singled to lead off and Thomas moved him up with a sacrifice. Ruth swung hard three times, and missed three times for the second out. Hooper hit a ball down the third-base line; as it went off his glove, Mowrey knew Hooper had it beat but feigned a throw to first. The decoy worked and Scott overran third. Olson scooted over from shortstop and took Mowrey’s throw, nabbing Scott as he tried to get back to the bag. The scorer credited Hooper with a single, but the side was retired.

Neither team had particularly good chances in the 11th or 12th inning, and the sky was growing dark. If the game were called because of darkness, it would go into the scorebook as a tie. Neither team wanted to waste a great pitching performance, but they were running out of time.

So to the 13th. Brooklyn’s first batter, Mowrey, reached base when Gardner’s throw pulled Hoblitzell off the bag. The Robins sacrificed to move Mowrey to second, but Miller popped up to the catcher for out number two. Smith, still pitching for Brooklyn, almost dropped one into short left but Lewis made a “phenomenal” catch and the Sox were out of the 13th. Tim Murnane of the Boston Globe felt sure that Lewis had saved a run: “Tearing along as if it was a case of life or death, he made one final reach while twisting his neck like a seagull and managed to reach and hold the ball.” The game had been characterized throughout by exceptional fielding for both teams. Smith quickly retired all three of Boston’s batters, and the game entered the 14th inning.

Babe Ruth had not given up a hit since the eighth inning. He set Brooklyn down again 1-2-3 in the top of the 14th. The Sox came up in the bottom half and Smith walked Hoblitzell, the fourth time in the game that Hobby had worked a walk. Lewis sacrificed the walking man to second, first-pitch bunting. A hit now could win the game. Larry Gardner was due up, but he was 0-for-5 and Carrigan decided to try something different. He put the speedy Mike McNally in to run for Hobby and sent up “Sheriff” Del Gainer (a .254 hitter in 1916) to pinch-hit for Gardner (.308 in the regular season, and 1-for-4 in Game One, and reached on an error). Despite his overall better numbers, Gardner was 1-for-9 in the Series at this point and had struggled against the left-handed Smith. The switch paid off. Gainer singled, a low liner to left, and Zack Wheat had to play it on one hop and hope the throw home could beat McNally. Not a chance. McNally burned around the bases and crossed the plate. The Red Sox had their second run and the game.

No other World Series game before or after has gone to 14 innings. After Myers’ freak inside-the-park home run back in the first inning, Babe Ruth had held the National League champions scoreless and earned the complete-game victory.

The Series would be over in five games. Game Three saw Brooklyn take one from the Red Sox 4-3, but the Red Sox handled the Robins by a 6-2 score in Game Four (Larry Gardner’s three-run inside-the-park homer in the second inning being the decisive blow). They won the World Series, their fourth, the second in a row, and the third in five years, with a 4-1 triumph the next day, Ernie Shore allowing just three hits and picking up his second win.

A lengthy Globe editorial rhapsodized about how the Athens of America followed in the Greek tradition of the Olympics being justly proud of the manly prowess of its sons. Carrigan, who had caught Game Four, gone 2-for-3, and managed the club, was dubbed “another Ivanhoe, less brutal and more civilized, less romantic than Scott’s fictional hero, but more skillful.” The confidence the Sox had carried into the Series had been justified.

This article appeared in “Braves Field: Memorable Moments at Boston’s Lost Diamond” (SABR, 2015), edited by Bill Nowlin and Bob Brady. To read more articles from this book, click here. An earlier version of this article was published in “The 50 Greatest Red Sox Games” by Cecilia Tan and Bill Nowlin and appears here by permission from Riverdale Avenue Books.

October 11, 2000: Mets’ pitching powers them to win in NLCS opener vs. Cardinals