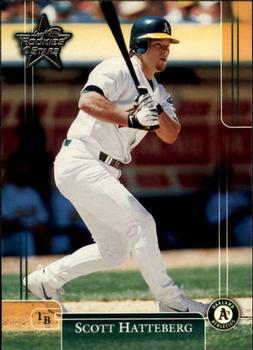 The Oakland Athletics reached the postseason in 2000 and 2001, but their October prospects for 2002 were in jeopardy after they lost 2-1 to the Toronto Blue Jays at home on August 12. The ’02 A’s had demonstrated potential for greatness – including a stretch of 16 wins in 17 games in June – but were 4½ games behind the first-place Seattle Mariners in the American League West Division, while also lagging the Boston Red Sox and Anaheim Angels for the AL’s wild-card spot.

But Oakland beat Toronto the next night and again the following afternoon. A three-game sweep of the Chicago White Sox followed. The A’s went on the road and swept the Cleveland Indians, Detroit Tigers, and Kansas City Royals. Returning to Oakland, they took three games from the Minnesota Twins, who were rolling to an AL Central Division title.1

By the finale with the Twins on September 1, won on Miguel Tejada’s walk-off three-run homer, Oakland had the best record in the AL, a 3½-game division lead, and a franchise record 18 wins in a row.2

A day later, on Labor Day, Tejada had another walk-off hit, a single in the ninth to give the A’s a 7-6 win over the Royals, tying the 1906 White Sox and 1947 New York Yankees for the longest winning streak ever in the American League.3

After a Tuesday off-day, fans showed up early at Network Associates Field on September 4 to see if Oakland could keep it going. “Because it was Dollar Night, 17,000 upper-deck seats at that price were available and sold out early,” the New York Times reported.4

The A’s opened a section of “8,000 outfield seats, unofficially nicknamed ‘Mount Davis’ because they are part of a grandstand built for the Oakland Raiders football team, and their owner Al Davis.”5 At 55,528, it was the largest crowd to see the team since the Athletics moved from Kansas City to Oakland in 1967.

The parking lot was filled with fans having tailgate parties as they waited to get through the gates and hopefully see their team make history. “It’s been a like a playoff atmosphere in here for the last few days,” said A’s manager Art Howe. “It’s good for the guys to get into that frame of mind soon. That’s a good part of (the streak).”6

Tim Hudson, who had won all four of his starts during the streak and had gone 5-0 with a 1.80 ERA in August, started for the A’s. Hudson breezed through the first three innings, allowing only a single in the second and a double in the third.

Right-hander Paul Byrd took the mound for Kansas City. The 31-year-old came in with a 15-10 record, headed for the best season of his 14-year career.7 Among major-league pitchers that year, only Bartolo Colon and Hall of Fame-bound Randy Johnson topped Byrd’s seven complete games.

But Byrd’s appearance on this night was brief. With “[m]any in a walkup crowd of 20,514 … still at the ticket windows,” Oakland jumped on Byrd for six runs in the first inning.8

Kansas City manager Tony Peña replaced Byrd with Darrell May in the second, but May was no more successful. Mabry greeted him with a homer to push the A’s lead to seven runs, at 7-0.

Staked to an 11-0 lead through three innings, Hudson appeared “to lose interest,” wrote Ross Newhan of the Los Angeles Times,10 and the Royals rallied for five runs in fourth. With one out, Ibañez Joe Randa singled. When Tejada couldn’t handle the throw from second baseman Mark Ellis on Brett Mayne’s sharp groundball for an error, the bases were loaded. Singles by Dee Brown and Neifi Perez brought home three runs. Michael Tucker’s two-out double scored two more, and the A’s lead was down to 11-5.

Rebounding with scoreless innings in the fifth and sixth, Hudson seemed to have matters under control when he picked up two quick outs in the seventh, but singles by Mike Sweeney and Ibañez, both on 1-and-2 counts, ended his night at 104 pitches. Howe turned to right-handed submariner Chad Bradford, an effective middle reliever with Oakland ever since the A’s picked him up in a trade in December 2000.11

Bradford retired Randa for the third out but lost his control in the eighth. The first two batters, Mayne and Brown, walked, and Perez’s single loaded the bases. Luis Ordaz hit a grounder in the hole on the left side of the infield. Shortstop Tejada fielded it and threw home, but his throw came up short, preventing catcher Hernandez from handling it, and Mayne scored. (The play was ruled a fielder’s choice.)

With the score now 11-6, left-hander Ricardo Rincon, obtained from the Indians at the July trade deadline, replaced Bradford and struck out Tucker. Carlos Beltran’s sacrifice fly scored Brown, but the lead was still four runs and there were two outs.

Right-hander Jeff Tam was brought in to face Sweeney, who battled for nine pitches before hitting one over the left-field wall for a three-run homer, his 20th of the season. The A’s lead was now only one run, at 11-10. Micah Bowie came in to get the third out, a grounder to second by Ibañez.

Just three outs from 20 wins in a row, Oakland called on closer Billy Koch to pitch the ninth. Koch entered with 37 saves and was the winning pitcher in wins 18 and 19 of the streak, thanks to Tejada’s clutch hits.

The first batter, Randa, worked the count full before hitting a single. Mayne’s sacrifice pushed pinch-runner Kit Pellow to second, but Koch struck out Brown for the second out.

Royals manager Peña sent up 37-year-old Luis Alicea – his teammate with the St. Louis Cardinals 14 years earlier – to bat for Perez. Alicea singled to left, scoring Pellow and tying the game at 11-11. Alicea advanced on a wild pitch before he was caught trying to steal third for the third out. But what seemed like a certain A’s win was now an improbable tie.

Jason Grimsley, the fifth Royals pitcher, who had come into the game in the eighth, remained on the mound for the bottom of the ninth. The 35-year-old right-hander, who had been Peña’s batterymate with the Indians in 1995, got Dye to fly to right for the first out.

A’s manager Howe went to his bench and sent Scott Hatteberg to the plate to bat for Eric Byrnes.

Hatteberg had signed with the A’s in January 2002 after the team had lost Jason Giambi to free agency. With the Red Sox, Hatteberg had spent the first seven seasons of his career at catcher but the A’s told him that they planned to play him at first base. The A’s analytics indicated that Hatteberg could replace Giambi’s bat in their lineup.12

Hatteberg had faced Grimsley two days earlier. Grimsley threw him “six straight sinking fastballs, down and away. With two strikes on him, Hatteberg had swung at the last of them and hit a weak ground ball to second base.” But that at-bat had helped Hatteberg face Grimsley again. “He’d seen six pitches from Jason Grimsley. He’s gathered his information. He knew that, if at all possible, he shouldn’t fool around with Grimsley’s low sinkers.”13

Grimsley’s first pitch was a low fastball. The second pitch was also a fastball but high in the strike zone. Hatteberg swung and “rode to the rescue with a blast into the right-field bleachers – his first walk-off homer.”14

Hatteberg watched the ball leave the park and land high in the stands before raising his right arm. “My first hit in the big leagues was pretty emotional, but this was as big as they come,” he said. “This whole ‘streak’ has been like a fairy tale, and this was just one more chapter.”15

“We’d just given up 11 straight runs, so weren’t looking too good. But it’s been an awful crazy ride. I can’t want [sic] to see what happens next. If this were a book, I’d buy it,” Hatteberg said.16

Howe acknowledged the streak but also recognized that the A’s were still in a pennant race, saying, “We don’t want to get carried away and lose sight of what our goal is, but it’s hard not to think what this means. It’s something that we can think about this winter, sitting around the fireside, that we did something special. All the years they’ve been playing baseball and nobody has done this before. It’s something to be proud of.”17

Oakland’s streak ended two days later with a 6-0 loss to the Twins in Minnesota. The A’s finished first in the AL West but bowed out of the playoffs in the Division Series, losing in five games to the Twins.

This article was fact-checked by Larry DeFillipo and copy-edited by Len Levin.

1 The threat of a strike began to throw a shadow over the streak as the August 30 strike deadline approached. Most of the A’s stayed focused on winning despite the fact that they might not be playing in September. “We have to put that aside right now,” said Oakland starter Barry Zito. “If we had lost 15 in a row, we’d feel the same way (about the strike).” Associated Press, “No. 15, but Now What?,” San Francisco Examiner, August 29, 2002: 5B.

2 The A’s, despite winning 19 games in a row were still in a tight division race with the Anaheim Angels. The Angels were 12-6 during the same period. “We needed all [those games],” said Oakland general manager Billy Beane. “I’d hate to think where we’d be if we had only split them.” Ross Newhan, “Pinch Them: A’s Win Record 20th in a Row,” Los Angeles Times, September 5, 2002: D1, D3.

3 The 1916 New York Giants won 26 games but there was a tie in the middle of the streak. The team won 12 games before the tie, a game that was stopped by darkness, and 14 games after the tie. The 1880 Chicago White Stockings and 1935 Chicago Cubs won 21 straight games.

7 Byrd’s 17-11 record in 2002 gave him a career high in wins, and his 5.6 Wins Above Replacement, as calculated by Baseball-Reference, was also a career best.

9 This would turn out to be the only walk the A’s received that night in 42 plate appearances.

11 “Chad Bradford was, to the Oakland A’s front office, a no-brainer. ‘It wasn’t that he was doing it differently,’ said Paul DePosta [the A’s sabermetrician]. ‘It was that the efficiency with which he was recording outs was astounding.’ Chad Bradford had set off several different sets of bells inside Paul’s computer. He hardly ever walked a batter; he gave up virtually no home runs; and he struck out nearly a batter an inning.” Michael Lewis, Moneyball (New York: W.W. Norton and Company, 2003), 242.

12 “Hatty had some power, what he really had was an approach to hitting that helped an offense to create runs. When he was with the Red Sox, he had gotten on base at a rate about 25 points higher than the league average. … He’d also do something else, too: wear out opposing pitching. Scott Hatteberg’s at bats went on and on; they were nearly as drawn out as Jason Giambi’s. … He consistently worked himself into deep counts and yet, in spite of hitting often with two strikes, routinely put the ball in play. The ratio of his walks to his strikeouts was among the highest in the league.” Michael Lewis, Moneyball (New York: W.W. Norton and Company, 2003), 170-171.

17 Van Vliet. In 2021 SABR recognized baseball’s 50 greatest games of the previous 50 years, as part of the celebration of the organization’s semicentennial. The list included this game as part of that collection. All of the games can be viewed in the “SABR 50 at 50: Greatest Games” collection, available at https://sabr.org/50at50/games.