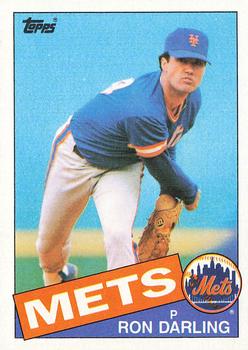 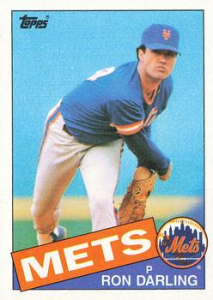 This is a tale of two 24-year-old right-handed starting pitchers, two lefty relievers, and a Tuesday night matchup at Pittsburgh’s Three Rivers Stadium that produced what the New York Times called a game of “classic pitching and outrageous contrasts,” as José DeLeón of the Pittsburgh Pirates and Ron Darling of the New York Mets rewrote franchise record books with dueling masterpieces, yet received no-decisions.1

Both DeLeón and Darling had debuted in the majors in 1983, and both were making the second start of their second full season when they opposed each other on April 16, 1985.

DeLeón had joined the Pirates from Triple A shortly after the All-Star break in 1983. Born in the Dominican Republic and later of Perth Amboy, New Jersey, he was an immediate sensation, taking no-hitters into the seventh inning or later three times in a six-start span while the Pirates battled the St. Louis Cardinals, Montreal Expos, and eventual champion Philadelphia Phillies in a tight National League East race.2 DeLeón finished with a 7-3 record and a 2.83 ERA in 15 starts and placed seventh in the NL Rookie of the Year voting.

DeLeón was less effective in 1984, but what hurt him the most was Pittsburgh’s offense, outscored by all but two other major-league clubs. He had a 7-13 record on a sixth-place team, even though his 3.74 ERA was only slightly worse than league average. DeLeón continued to flirt with pitching glory, such as when he threw six perfect innings against the Cincinnati Reds in August in what turned out to be a one-hit, complete-game loss.3

The Mets had called up Darling in September 1983. Drafted from Yale by the Texas Rangers in June 1981, then traded to New York less than a year later, he earned his first major-league win against the Pirates in the last week of the 1983 season.4

Darling was in New York’s rotation throughout 1984, as the Mets came in a surprising second behind the Chicago Cubs. While not receiving the acclaim of record-breaking fellow rookie Dwight Gooden, Darling finished at 12-9 with a 3.81 ERA, and was fifth in the NL Rookie of the Year voting.

In 1985 both DeLeón and Darling had pitched well enough to win their first starts but were winless. DeLeón had fanned nine Cubs in seven innings in a 4-1 loss on April 11.5 On the same day, Darling allowed just one run in seven innings but received a no-decision in an 11-inning win over the Cardinals.

DeLeón began his second start of the season by fanning the first two Mets batters he faced. The next hitter, Keith Hernandez, doubled, but DeLeón stranded him on a pop fly by Gary Carter, newly added to the Mets lineup in 1985 thanks to a blockbuster offseason trade with the Expos.

Johnny Ray, whose .312 average in 1984 was fifth in the NL, led off Pittsburgh’s half of the first with a single, which turned out to be the only Pirates hit all evening. Outside of Sixto Lezcano walking in the second and fifth, nobody else reached base against Darling through the first seven innings.

As in the first inning, DeLeón struck out two Mets in the second, opening with Darryl Strawberry’s first of four strikeouts in the game. DeLeón’s only blemish followed, when George Foster doubled off a forkball and scored on Howard Johnson’s single.

“There should be a law against a man throwing 95-MPH fastballs and then forkballs that drop a foot,” said Foster, who also struck out twice against DeLeón. Pirates manager Chuck Tanner echoed Foster when he told reporters, “How he hit that ball I’ll never know. The ball dropped this far. [He held his hands two feet apart.] It was impossible to hit that pitch.”6

The Mets clung to their one-run lead as DeLeón struck out two Mets in every inning except the sixth. When DeLeón walked off the field after Wally Backman grounded out to end the eighth, he had struck out 14 Mets, topping his previous best of 13 Reds in August 1983. But the Pirates still trailed, 1-0.

Darling’s control faltered in the eighth. Lezcano led off by walking for the third time. Tanner went to his bench, sending in Bill Almon to run for Lezcano and Joe Orsulak to bat for Rafael Belliard.

Orsulak attempted to bunt, fell behind 0-and-2, then battled back for a walk, as Almon stole second. Even with the shutout and one-hitter going, Mets manager Davey Johnson decided to replace Darling with left-hander Jesse Orosco, with two on and no outs.7

Turning to his reserves again, Tanner sent up ex-Met Lee Mazzilli, who walked to load the bases.

The runners held on Ray’s shallow fly ball, but Bill Madlock hit a sharp grounder just inside third. Howard Johnson made a diving stop to keep the ball from going into the left-field corner for extra bases. He quickly recovered and beat Orsulak to third for the second out as Almon crossed the plate with the tying run.

“It was the play of the game, just getting the ball,” said Orosco. “I thought he couldn’t field. That’s what they said about him,” said Hernandez of Johnson. “Are you kidding me?”8

Orosco then got George Hendrick to fly out to center. Despite DeLeón’s 14 strikeouts and Darling’s seven one-hit innings, both were destined for no-decisions in the 1-1 tie.

The tie didn’t last long. John Candelaria took over for DeLeón. The Pirates had converted the 33-year-old lefty to a reliever late in the 1984 season after he had spent the previous nine years in the starting rotation, winning 122 regular-season games and Game Six of the 1979 World Series. At the time, Tanner said of Candelaria, “I think that he can pitch one or two innings of relief five days a week and be very effective.”9

Candelaria had proved effective in his new role, allowing only one run in his previous seven relief appearances since September 1984. He entered with a win and two saves in 1985, including a 2⅓-inning save a night earlier.

But Mookie Wilson led off the ninth with a triple to right center. Hernandez then lifted a long fly ball to center that brought Wilson home for the go-ahead run.

Orosco made short order of the Pirates in the ninth, striking out all three batters to earn the win after blowing his save opportunity in the eighth. The 2-1 win was the 15th one-hitter in Mets history – and the first involving more than one pitcher.

The result was frustrating for both starters. It was the 10th no-decision in 18 starts for Darling. “I’d be lying if I said it wasn’t a little frustrating,” he said. “I’ve pitched well twice now and I’ve got nothing to show for it. But we won and that’s the ultimate goal. If we had lost, I would be really frustrated.”10

Davey Johnson was not concerned about the no-decision. “If Ronnie pitches like that, he’s going to win a ton of games,” Johnson said. “But late in the game, walking a couple of batters is the cardinal sin. I thought he pitched an outstanding game.”11

Darling did finally earn some wins, beginning with a complete-game shutout of the Pirates on April 26. He finished the season with a 16-6 record and a 2.90 ERA and was selected for the All-Star Game for the only time in his career, as the Mets won 98 games and finished second in the division behind the Cardinals.

DeLeón left the locker room after the game without talking to any reporters. In his first two starts of the season, he had struck out 23 batters, but the Pirates scored only two runs to support him.

Candelaria, who was tagged for the loss, said he understood DeLeón’s frustration. “They tell you it all evens out, but I don’t think José wants to believe that,” he said. “That’s just a bunch of bull. He needs to win a couple of those games, 2-1 or 1-0. It’s the only thing that will make him happy, and I’d love to see him happy. I know what it’s like to be unhappy playing this game and I don’t wish that on anyone.”12

DeLeón’s 14 strikeouts tied a club record for strikeouts by a right-handed pitcher, set by Bob Moose in 1969. As of 2022, Bob Veale held the club record with his 16-strikeout performance against Philadelphia on June 1, 1965.

Tanner had high praise for his starter. “A classic,” he said. “Marvelous pitching on both sides. DeLeón was striking them out on forkballs that looked like knuckleballs. It was a great show.”13

DeLeón finished the season with a 2-19 record, as the Pirates were a major-league-worst 57-104. His 19 losses in 1985 and 19 losses again with the Cardinals in 1990 were the only 19-loss seasons by an NL pitcher between Phil Niekro of the Atlanta Braves in 1979 and Omar Daal of the Phillies and Arizona Diamondbacks in 2000. After DeLeón continued to struggle, the Pirates traded him to the Chicago White Sox on July 23, 1986, for Bobby Bonilla.

7 “It was a bunting situation and I’ve proven I can field my position. I wish I could have stayed in. But I’m not questioning Davey,” Darling said afterward. Marty Noble, “Darling, Orosco 1-Hit Pirates,” Newsday, April 17, 1985: 131.

8 Noble. Johnson arrived from the Detroit Tigers in a December 8, 1984, trade for Walt Terrell. At the time, Detroit manager Sparky Anderson did not have confidence that Johnson could play third base and felt that he had other options at that position. At the time of the trade, Johnson said he thought his play “proved that I could play third base in the big leagues.” He also said he expected to earn the starting job with the Mets. Gene Guidi, “HoJo Dealt for Mets Pitcher,” Detroit Free Press, December 8, 1984: 5D.