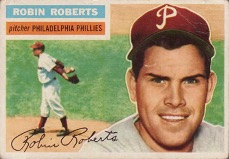 “Figure to repeat on youth and depth of pitching and long ball power. Gaps may appear in line-up. Robinson is about through. Reese can’t go much longer. But if Campanella holds up and staff stays reasonable sound, should breeze. Morale received boost in first World Series triumph and Alston established leadership.” — 1956 Dell Baseball Annual1

In the prologue to The Last Good Season, the story of the 1956 Brooklyn Dodgers, Michael Shapiro wrote, “A baseball season’s Opening Day is a moment filled with possibility.”2 As the World Series champion Dodgers opened the 1956 season at Ebbets Field against the Philadelphia Phillies, Shapiro reminds us that a second contest was taking place between Dodgers owner Walter O’Malley and the powerful New York City parks commissioner, Robert Moses.

O’Malley wanted land in Brooklyn for a new ballpark to replace an Ebbets Field that was aging in a congested and rapidly deteriorating neighborhood. Parking could no longer be accommodated for a fan base increasingly traveling to Brooklyn from the suburbs. Attendance decreased steadily from a peak 1,807,526 in 1947 to barely over one million fans in 1955.3

The drama and outcome of this second contest is well documented. The Dodgers moved to Los Angeles after the 1957 season. This season-opening two-game series with the Phillies also included a game at Roosevelt Stadium in Jersey City.4 It was all part of the drama.

There were a few things to do before first pitch on this Opening Day. Brooklyn’s celebratory parade leading to the ballpark was sparsely attended. The New York Times characterized it as “more like a scratch single than a home run.”5 The “World Champions 1955 Dodgers” banner was raised and flew above the scoreboard in right field at Ebbets Field for the first time on Opening Day. When it came time for Everett McCooey6 to sing the national anthem, he shouted over the loudspeaker, “Who’s going to raise the [American] flag?”7 A flag-raiser was finally found and McCooey sang. Only in Brooklyn could this happen!

The Opening Day pitching matchup was both fitting and familiar, Don Newcombe for the Dodgers and Robin Roberts for the Phillies. Newcombe (20-5) and Roberts (23-14) were the only 20-game winners in the major leagues in 1955. Familiar? Roberts started on Opening Day for the Phillies every year in the 1950s, no matter the opponent.8 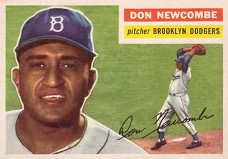 Newcombe was the opposing pitcher when Roberts made his first Opening Day start in 1950. In that start, Roberts was in control from the outset and Newcombe didn’t survive the second inning as the Phillies won 9-1.9 In fact, Roberts and Newcombe faced each other six times as starting pitchers during the 1950 season with Roberts (3-1) holding a decidedly better record than Newcombe (1-5) in those encounters. The last game of the season was of the greatest consequence. When Dick Sisler hit a home run against Newcombe in the 10th inning, Roberts had his 20th win of the season and the Phillies clinched the National League pennant over the second-place Dodgers.10

In the intervening years, Newcombe and Roberts faced each other four times, twice in 1951 and twice again in 1955. Each won two of those games. Newcombe did not play in the major leagues in 1952 and 1953 while completing his military service. On this day they met for the 11th time as Roberts made his seventh consecutive Opening Day start for the Phillies.

Neither pitcher was particularly sharp in the early going. After a scoreless first inning, Newcombe hit the first batter, Del Ennis, in the second. When Jim Greengrass walked and Stan Lopata followed with a single to center, Ennis crossed the plate for a 1-0 Phillies lead. Newcombe got out of further trouble after walking Andy Seminick, getting Roberts to hit into a double play.

Roberts himself had gotten out of a first-inning scoring threat by the Dodgers by getting Roy Campanella to ground into an inning-ending double play. He wasn’t so lucky in the second. Gil Hodges walked, advanced to second on Jackie Robinson’s groundout, and scored when Carl Furillo lined a double to left. Furillo was subsequently thrown out at third by Granny Hamner on Charlie Neal’s grounder, but that didn’t stop the Dodgers’ attack. Newcombe, a .359 hitter in 1955, lined a double off the left-field wall, scoring Neal for a 2-1 Dodgers lead.

The Phillies’ answer in the third inning was resounding. Richie Ashburn, Ted Kazanski, and Hamner opened with consecutive singles, tying the score at 2-2. With one out, Greengrass hit a three-run homer over the right-field screen for a 5-2 Phillies lead and Newcombe’s exit. Reliever Ed Roebuck fared little better, walking Willie Jones and yielding a run-scoring double by Seminick for a five-run inning.

Roberts was in trouble again in the third when two singles and a walk loaded the bases with one out. Robinson’s sacrifice fly scored Duke Snider to cut the Phillies lead to 6-3, but it could have been worse.

The teams traded solo home runs in the fourth inning, Hamner for the Phillies and Jim Gilliam for the Dodgers. Gilliam’s line drive to the left of center fielder Ashburn took a bad hop. When Ashburn skidded and fell, Gilliam raced around the bases, scoring ahead of the relay throws.11

With one out in the bottom of the fifth, Campanella hit Roberts’s first pitch off the façade in left-center field for a home run to cut the Phillies lead to 7-5. The Dodgers were still in the game thanks to two perfect innings, the fifth and the sixth, by their third pitcher, Jim Hughes.

Roberts’s so-so pitching performance turned for the better after Campanella’s homer. He achieved the rarest of occurrences for a pitcher in the sixth, an immaculate inning, by striking out Furillo, Neal, and Sandy Amoros, all swinging, on nine pitches.12 Rare? 104 such innings in all of major-league baseball history.13

Over the final four innings, Roberts allowed the Dodgers only one hit, and the single run they scored in the seventh was without the benefit of a hit. Lopata booted Gilliam’s grounder to open the half-inning. When Pee Wee Reese walked and Snider grounded out to second, the Dodgers had the tying runs in scoring position with only one out. Campanella and Hodges both hit infield grounders and the Dodgers settled for one unearned run, narrowing their deficit to 7-6.

The fourth of the Dodgers’ pitchers, Clem Labine, pitched two innings. Labine retired the side in order in the seventh, but erratic Brooklyn defensive work was costly in the eighth. With one out, Jones lined a single to center. Third baseman Robinson’s errant throw to second on Seminick’s grounder left everyone safe.

The runners advanced on Labine’s wild pitch and he hit Robin Roberts to load the bases. When the rookie Neal booted Ashburn’s grounder to second, the Phillies had an 8-6 lead. Before the game, Neal had admitted to the press that he was a little nervous about his major-league debut.14

The last of the Dodgers’ five pitchers, Don Drysdale, also made his big-league debut, taking the mound for the ninth inning. On 11 pitches, the 19-year-old Drysdale retired the side, flawed only with a walk to Jim Greengrass. His career as a Hall of Fame starting pitcher would begin shortly.15 Roberts also threw 11 pitches in the ninth inning, retiring Reese, Snider, and Campanella in order to become the official spoiler in Brooklyn on Opening Day. He had just beaten the Dodgers at Ebbets Field for the 15th time in his career.16

During the last week of the 1956 season, Roberts beat the Dodgers one more time at Ebbets Field, 7-3. His opponent? Don Newcombe, of course! The similarities with the Roberts vs. Newcombe duels in the 1950 season are striking, but this season’s outcome for both teams was vastly different. Superstitious Phillies fans were dismayed, eager for baseball history to repeat itself.17

The baseball season is a long grind revealing itself only one game at a time, one story at a time. After six consecutive 20-win seasons, Roberts (19-18) finished one win shy in 1956. Newcombe (27-7) won the major leagues’ first Cy Young Award, leading the Dodgers to the National League pennant. Indeed, the possibility of Brooklyn’s last good season became the reality of the last Brooklyn Dodgers vs. New York Yankees World Series. That’s for another story.

Don Newcombe pitched and won the first major-league baseball game this author ever saw.18 What do I remember from that Sunday afternoon in June 1951? The sparkling white home uniforms of the Brooklyn Dodgers and the luscious green grass of Ebbets Field.

The author accessed Baseball-Reference.com for box scores/play-by-play information (baseball-reference.com/boxes/BRO/BRO195604170.shtml), and other data, as well as Retrosheet.org (retrosheet.org/boxesetc/1956/B04170BRO1956.htm) and Baseball-Almanac.com (baseball-almanac.com/feats/feats17.shtml). The 1956 Dell Baseball Annual was provided on loan from SABR member Evan Katz. The baseball cards (Robin Roberts #180, Don Newcombe #235) are from the 1956 Topps series and were obtained from the Trading Card Database.

3 The attendance at Ebbets Field in 1955 was 1,033,589. “Perhaps the greatest disappointment came on April 21 when exactly 3,874 fans showed up to see the Dodgers set a modern major league record of 10 straight wins from the start of the season by routing Robin Roberts and the Phillies 14-4.” (Dell Baseball Annual, 1956: 12.)

6 Everett McCooey was a locally famous tenor whose father, John McCooey, was the most powerful political figure in Brooklyn. Michael D’Antonio, Forever Blue: The True Story of Walter O’Malley, Baseball’s Most Controversial Owner, and the Dodgers of Brooklyn and Los Angeles (New York: Penguin, 2009), 29.

12“An immaculate inning occurs when a pitcher strikes out all three batters he faces in one inning, using the minimum possible number of pitches — nine. The strikeouts can either be of the swinging or the caught looking variety, and there can be foul balls involved,” baseball-reference.com/bullpen/Immaculate_inning.

13 Research has not yet revealed the first-use of immaculate inning. Author John Cairney noted, “It is not clear who first coined (or penned) the phrase, but beyond the common linking of immaculate to conception in religion, the word simply means perfection from mistakes.” (John Cairney, Immaculate: A History of Perfect Innings in Baseball (Oakville, Ontario: Mosaic Press, 2015); John Cairney, email to author, December 15, 2021.)

There had been no such events in major-league baseball between 1929 and 1952 and the terminology itself was not part of either the baseball lexicon in 1956 or The Dickson Baseball Dictionary Third Edition, published in 2009. The last immaculate inning of the 2021 season was thrown by Max Scherzer (Los Angeles Dodgers) on September 12, 2021, when he struck out Fernando Tatis Jr., Eric Hosmer, and Tommy Pham (San Diego Padres) in the second inning. This was the third time Scherzer had thrown an immaculate inning, tying Chris Sale and Sandy Koufax for the most on record. (Ed Eagle, “Immaculate Innings: 3 Strikeouts on 9 Pitches,” MLB.com, September 12, 2021, mlb.com/news/immaculate-innings-c265720420.)