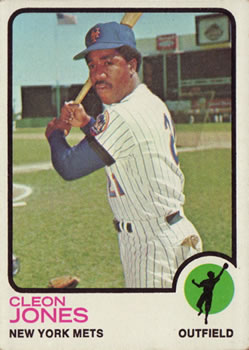 A World Series berth was 161 games and an NL playoff away.

Coming off a third-place finish in 1972 with an 83-73 record – 13½ games out of first place – the Mets began ’73 with a 3-0 shutout against the Phillies and a declaration of power from a beloved member of the blue-and-orange squad. Cleon Jones’s two home runs accounted for the Mets’ three tallies at Shea Stadium.

Daily News columnist Dick Young floated the notion of postseason glory and job security for manager Yogi Berra with an eerily accurate prediction of what would happen in the fall: “If the Mets win the pennant, and lose the World Series in 7, Yogi Berra will not be fired. I guarantee it.”1

Indeed, the Mets lost to the Oakland A’s in seven games. Berra kept his job until he got his pink slip in August 1975.2

Phillies skipper Danny Ozark was equally effusive about his squad a couple of days before the game. “I haven’t changed my opinion yet,” said Ozark as he readied for his first season managing in the major leagues. “I probably won’t change my mind until Oct. 20 – until the seventh game of the World Series. We’ll be in the lineup.”3

America’s involvement in the prolonged Vietnam War was still making headlines and causing controversy in 1973, but hope was evident as the Mets invited 11 freed prisoners of war to throw out the first pitch.4 The pitchers’ efficiency on this first day of the ’73 campaign kept the game under two hours. Tom Seaver started for the home team and had eight K’s for the afternoon; Philadelphia’s ace southpaw Steve Carlton struck out three; and each fireballer limited the opposition to five hits. It was the first of three consecutive Opening Day matchups for the two future Hall of Famers.

Phillies third baseman José Pagán – then in the last year of a 15-year career and his only season with the Phillies – got caught looking for Seaver’s first strikeout in the top of the second. Denny Doyle’s strikeout began the top of the third; Del Unser followed suit with a leadoff strikeout an inning later.

Jones, a veteran with the Mets organization since 1963,5 hit his first home run with two outs and Félix Millan aboard in the bottom of the fourth. The Atlanta import with a grip choked up high on the bat had smacked a leadoff double, succeeded by Willie Mays flying out to Unser in center field and Rusty Staub whiffing before Jones’s first-pitch bash over the left-field fence.6

Seaver notched strikeouts number 4, 5, and 6 in the top of the fifth – Greg Luzinski, Mike Ryan, and Doyle for the second time.

But there was a collective holding of breaths and wincing of eyes among Mets rooters an inning later when Willie Montañez – the 1972 major-league doubles leader – connected for “a scorching line drive” to right field. Staub chased down the sphere, crashed into the Shea Stadium outfield wall, and fell to the warning-track dirt with the ball firmly in his glove’s webbing. “That wall comes at you so quick,” said Staub. “You don’t know what hit you. All of a sudden, you just realize you’re on the ground. I hit it with my whole right side – head to toe, but I didn’t even know what had happened. All I knew was that when I looked in my glove, there was a baseball inside.”7

Berra offered insight buttressed by his trademark humor: “It woke him up. Next time up he hit a line drive.”8

In the top of the seventh, Tom Hutton led off with a single. Luzinski, aka “Bull,” struck out for the second time and José Pagán flied out to Mays. Ryan, who batted .179 in 46 games in 1972, whiffed again. Ozark had a highly significant restriction in replacing the sub-Mendoza Line Ryan with a pinch-hitter because the Phillies didn’t have a trio of backstops. A paperwork snafu limited the roster. It would be a risk not worth taking.9 Ozark affirmed, “Yes, it did occur to me to pinch-hit for Ryan. But I only have two catchers.”10

Jones led off the Mets’ seventh with a solo home run to make the score 3-0. Success was possible against the dominant southpaw if one had patience, according to the Mets center fielder: “With Carlton, all you have to do is stay close, because he always has the ball around the plate and sooner or later you’ll get your pitch.”11

Although Jones was a clutch performer, the round-tripper was perhaps unexpected from a hitter considered to be in the category of finesse rather than power. Jones never hit more than 14 home runs in one season. This was the first of two times that he notched two in one game.

Jones lauded Carlton, the National League’s 1972 Cy Young Award winner, who had led the majors with 27 wins and dominated the NL with a 1.97 ERA, 41 games started, and 310 strikeouts. “I just try to meet the ball, especially against Steve Carlton,” said Jones. “I’ve had pretty fair luck with Steve, but he’s the kind of a pitcher who’s likely to strike me out the next four or five times straight.”12

Seaver retired Doyle with a grounder to Millan in the top of the eighth, then gave up a double to pinch-hitter Bill Robinson. Bowa grounded to Mets third baseman Jim Fregosi for the second out, but Unser walked; Berra sent in lefty Tug McGraw in relief. Seaver admitted, “I got to the position they could have tied the game up and I knew I was gone. I just ran out of gas.”13

Pinch-hitter Deron Johnson, a right-handed batter, subbed for Montan͂ez and made the third out with a foul ball caught by Fregosi.

Bill Wilson replaced Carlton in the bottom of the eighth and stopped the Mets with a three-up-three-down performance. McGraw then added a strikeout to Seaver’s eight when Luzinski went down in the top of the ninth; it was the Bull’s third strikeout. McGraw retired all four Phillies he faced to secure Seaver’s victory.

Carlton and Seaver were not only welcome sights after a winter hibernation without baseball, they were expected. The right-hander nicknamed The Franchise had 16 Opening Day starts, 11 with the Mets. He notched a 6-0 record and 2.13 ERA in a New York uniform; strikeouts numbered 68. Carlton got the call 14 times for the inaugural contest, running up a 3-9 record and 4.30 ERA.14 The two Hall of Famers had seven Cy Young Awards between them – three for Seaver, four for Carlton.

1973’s Opening Day had excitement, innovation, and bittersweetness. Ron Blomberg became the Neil Armstrong of the American League’s designated-hitter rule when he took one giant leap into the batter’s box for lineups in the junior circuit. Blomberg went 1-for-3 with one RBI and a walk in the Yankees’ 15-5 loss to the Red Sox.

The Pirates beat the Cardinals 7-5. But the victory could not fill a fraction of the emotional void felt across Pittsburgh from Roberto Clemente’s death in a plane crash on New Year’s Eve. Typical of his kindness, Clemente was on a humanitarian mission to bring aid and supplies to victims of an earthquake in Nicaragua.

Don Baylor’s 4-for-4 day – each hit went for extra bases – spurred the Orioles to overwhelm the Brewers in a 10-0 blanking. The 6-foot-1 left fielder scored two runs and knocked in three.

Nolan Ryan struck out 12 in his initial ’73 outing to give the Angels a 3-2 victory against the Royals. He ended the season with 383 strikeouts to lead the majors – it’s the major-league record in the Modern Era (post-1900).

Jones’s pair of homers began the Mets’ unlikely trek toward the World Series. On the evening of September 1, they were eight games below .500 with a 63-71 record. They went 19-8 for the rest of the season and eclipsed the second-place Cardinals by 1½ games to win the NL East. In the National League Championship Series, the Mets beat the Reds in five games.

McGraw notched 10 saves throughout the Mets’ late-season rally in September and early October, fostering positive energy with his energetic chants of the team’s mantra – “Ya Gotta Believe!”

Seaver finished the ’73 campaign with a 19-10 record and won his second Cy Young Award. The Mets got to the World Series for the second time in five seasons. The Oakland A’s won in seven games, capturing the second of three consecutive World Series titles.

2 Berra had taken the managing job when Gil Hodges died of a heart attack right before the 1972 season. Hodges was two days shy of his 48th birthday.

5 Jones had played in six games with the Mets in 1963. He also saw action with the Raleigh Mets in the Carolina League and the Auburn Mets in the New York-Pennsylvania League that year. Jones had no time with the parent club in 1964, instead playing in the Florida Instructional League and with the Buffalo Bisons in the International League.

6 Millan, a stellar second baseman and outstanding contact hitter who had been on three NL All-Star teams with the Atlanta Braves, had come to the Mets in a November 1972 deal with lefty George Stone for right-handers Gary Gentry and Danny Frisella. “He doesn’t strike out very often, and he’s a good man to play hit-and-run,” said Berra at the time of the trade. Deane McGowen, “Mets Get Millan in Braves Trade,” New York Times, November 2, 1972: 55.

8 Gergen, “For Openers, Mets Had Cleon.”

9 Keidan. “Due to poor paperwork, a rookie pitcher already returned to the New York Mets’ organization was still listed on the Phillies’ 25-man roster, leaving no room for backup catcher Larry Cox.”