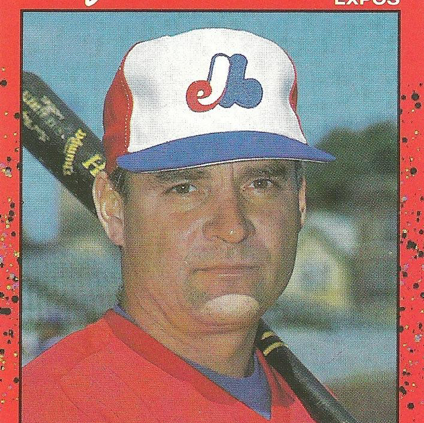 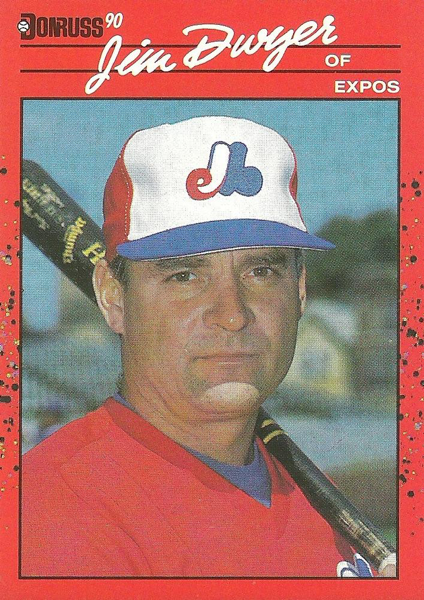 They called James Edward Dwyer “Pig Pen,”1 but the well-traveled outfielder also could have gone by “Dwyer for Hire.” With hustle, pinch-hitting talent, and a willingness to role-play as his calling cards, Dwyer divided his 18-year major-league career between seven teams. Three of them – St. Louis, Montreal and Minnesota – employed him twice.

Dwyer’s “split shift” with the Montreal Expos was especially extreme. The Expos dealt him to the New York Mets on July 21, 1976, in the midst of a disastrous season in which the team finished 55-107 and was no-hit by Larry Dierker of the Houston Astros.2 Dwyer, hitting .185 at the time, struggled for a few seasons before finding a lasting niche as a productive bench player, including a World Series title with the 1983 Baltimore Orioles.

On August 28, 1989, exactly 4,786 days after trading Dwyer, Montreal reacquired him from the Twins to support a late-season playoff push.3 Outfielder Alonzo Powell, who was 11 years old in July 1976, went to Minnesota as a player to be named later. Asked about his memories of Montreal, Dwyer, then 39 years old, told a reporter: “Heaters in the dugout. That’s what I remember in Montreal.”4

The next night, Dwyer made his first appearance as an Expo since July 18, 1976, when he grounded out as a pinch-hitter in a 7-6 loss to Houston.5 For Dwyer, his first game back didn’t result in a heroic game-winning homer. But it was a tightly played, edge-of-the-seat affair, and the 17,687 fans at San Diego’s Jack Murphy Stadium were treated to a 2-1 walk-off win.

Buck Rodgers’6 Expos entered the day as the third horse in a four-horse race in the National League East. St. Louis sat 2½ games back of the Chicago Cubs, Montreal trailed by three games, and the defending division champion Mets were 3½ back. Montreal played well through June and July, posting a 34-19 record over those months, and held a three-game lead on August 2. However, the team had slumped to 10-16 thus far in August. Also in support of the playoff run, Montreal acquired veteran pitcher John Candelaria from the Yankees that day.

Montreal’s leaders included third baseman Tim Wallach, first in the NL with 36 doubles; outfielder Tim Raines, among league leaders in walks and on-base percentage; and starting pitcher Mark Langston, also among leaders in shutouts and ERA. Langston was acquired from Seattle in late May in a multiplayer deal that sent future Hall of Famer Randy Johnson to the Mariners.

The August 29 game was the second in a three-game series. The Padres took the first game, 9-4. The teams matched up fairly evenly that year, with San Diego taking seven of 12 games from Montreal.

Jack McKeon’s San Diego team entered the game farther off the pace in the NL West, seven games behind eventual division champion San Francisco, with a 67-64 record. While the Expos struggled in the late going, the Padres turned up the heat. They went 18-11 for the month of August and followed with a 19-8 record in September. Outfielder Tony Gwynn was leading the league in hits (174) and batting average (.347) en route to winning his third straight batting title and fourth overall. He ranked second in stolen bases, with 38. Second baseman Roberto Alomar trailed Gwynn by five stolen bases and ranked fourth in the league in hits with 143. Alomar missed the August 29 game with the flu and was replaced by Bip Roberts.7

The Expos gave the start on the mound to Dominican righty Pascual Perez, who entered with a 7-12 record and 3.50 ERA but was rated by Rodgers as one of the team’s best second-half starters.8 He’d opposed the Padres three times in 1989, with results ranging from a loss on May 17 when he surrendered six runs (only two earned) in six innings, to a complete-game win on August 18. San Diego countered with righty Greg W. Harris, in his first full season following three appearances in 1988. Harris started only eight of his 56 games in 1989. One came against Montreal on August 19, when he was driven from the game in the fifth inning and took the loss. He entered the game with a 6-7 record and a 3.12 ERA.

Perez and Harris took center stage as the first two innings passed without incident, with a second-inning walk to Padres left fielder Chris James representing the only baserunner on either side. Perez and Harris struck out two hitters apiece. The Expos put two runners on in the third on walks to catcher Nelson Santovenia and Perez, but Harris retired Dave Martinez and Tom Foley to shut down the threat. The Padres mounted a rally in the fourth: Gwynn singled and stole second one out later, and James walked again. A fly to left by center fielder Marvell Wynne ended the inning.

The fifth and sixth innings also passed with scattered threats, but no runs. In the fifth, Santovenia walked and moved to third on the Expos’ first hit, a single by shortstop Spike Owen. Harris struck out Perez and Martinez to shut Montreal down, with Perez missing several signs for a squeeze bunt.9 With two away in the Expos’ sixth, Raines singled and moved to second on Wallach’s infield single to shortstop. Going into the game, Montreal first baseman Andres Galarraga held the NL lead in strikeouts with 128; Harris whiffed him swinging to end the inning. Through six, the Expos had three hits and the Padres two in a scoreless struggle.

Montreal finally scored in a sloppy seventh inning. Santovenia led off with a single. Harris balked, handing him second base. One out later, Perez reached first when third baseman Mike Pagliarulo threw wide on his grounder.10 Santovenia advanced to third, where pinch-runner Rex Hudler replaced him. Martinez grounded to Padres first baseman Jack Clark, who tried to start a 3-6-3 double play. Clark got the out at second, but the speedy Martinez was safe at first, and Hudler scored for a 1-0 Montreal lead.

The Padres stirred themselves in the bottom half. Clark walked, James singled, and Perez left the game in favor of lefty Zane Smith, a July pickup from Atlanta. Wynne bunted Clark and James up a base, and Smith intentionally walked catcher Benito Santiago to load the bases with one out.

Rodgers summoned righty Tim Burke, a mainstay of the Montreal bullpen in the latter half of the 1980s. Burke got pinch-hitter Luis Salazar to ground into a force play at second base. Santiago’s hard slide into Owen prevented the Expos from turning the double play.11 Clark scored from third to tie the game, 1-1. Pinch-hitter Tim Flannery grounded to second base for the third out.

Harris gave way to righty reliever Mark Grant in the eighth. Galarraga reached second on a force play and stolen base, but advanced no farther. For the Padres, Gwynn reached third base in the bottom of the inning on a single, wild pitch, and stolen base, but James stranded him with a grounder to third.

Dwyer re-entered Expos history in the top of the ninth, following a fly out by Owen. Pinch-hitting for Burke, Dwyer flied to Gwynn in right field. (Dwyer had to wait until September 10 – his fifth appearance with the 1989 Expos – to collect a hit. It was his first hit as an Expo since June 24, 1976.) Martinez popped to catcher to end the Expos ninth.

Montreal brought on Rich Thompson to work the ninth. Thompson made 57 appearances as a rookie with the 1985 Cleveland Indians, then disappeared from the majors for three seasons. He joined Montreal in early August 1989 and had pitched a perfect seventh inning against the heart of San Diego’s order the previous night.

Things didn’t go as smoothly in his return appearance. Wynne led off with a single to center, and Santiago bunted him to second. Next came Salazar, who had stayed in the game at third base after his pinch-hitting appearance. Thompson, trying not to give Salazar anything good to hit, bounced a pitch past substitute catcher Mike Fitzgerald that was scored as a passed ball. Wynne moved to third. Salazar hit a hard grounder with the infield drawn in that Owen couldn’t hold. Wynne scored on the infield single to hand the Padres a 2-1 victory, with Salazar driving in both runs.12 “The little things won it for us,” Gwynn said, referring to successful plays like sacrifice bunts.13

Montreal faded, ending the season in fourth place, 12 games behind the Cubs. Dwyer was open about not expecting a long second stint with Montreal: “My future is in the American League. As a DH, I did pretty well. … The Expos and I both know why I’m here. Loyalty doesn’t exist in this business. I’ll try to do the best I can.”14 He appeared as a pinch-hitter in 13 games with the Expos and was traded back to Minnesota in the offseason for minor leaguer Jim Davins. Dwyer hit .190 in 37 games with the 1990 Twins and was released, his career at an end.

In addition to the specific sources cited in the Notes, the author used the Baseball-Reference.com and Retrosheet.org websites for general player, team and season data and the box scores for this game. Tom Mank’s SABR Biography Project article on Jim Dwyer was also a primary source.

Image of 1990 Donruss card #484 downloaded from the Trading Card Database.

1 The nickname originated with Pig Pen, a chronically untidy character in Charles Schulz’s comic strip “Peanuts.” The name – written as two words by Schulz, but often condensed to one word in other uses – became popular as a nickname for a messy person. Boston media slapped the name on Dwyer in 1979 because his uniform was always dirty from diving on the basepaths or in the field. Peter Gammons, “Dwyer May Be the Newest ‘Cult Hero,’” Boston Globe, April 3, 1979: 38.

2 Dwyer and Pepe Mangual went to the Mets in exchange for Del Unser and Wayne Garrett. Dwyer appeared in Dierker’s no-hitter, flying out to center field in the sixth inning as a pinch-hitter for Don Carrithers.

4 Michael Farber, “Time Has Flown for Veteran Expo,” Montreal Gazette, August 30, 1989: C2. Dwyer also inquired about several Expos staffers from the 1970s, including ballpark organist Fern Lapierre, who was still on the job in 1989.

5 Dwyer was pinch-hitting for Pepe Frias. Frias also was still active in 1989, though not in the major leagues. He appeared that season for the Fort Myers (Florida) Sun Sox of the short-lived Senior Professional Baseball Association.

6 According to Farber, Rodgers had managed Dwyer in 1976 for the Licey team in the Dominican Republic.

9 Carbray. According to his story, Perez stepped out of the box three times during his at-bat to speak with third-base coach Jackie Moore.

10 Carbray. The play was scored as a single.