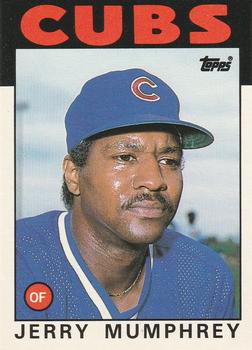 The New York Mets arrived at Wrigley Field in August 1986 with a commanding lead in the National League East. But the Chicago Cubs opened their five-game series with two wins. The second came when pinch-hitter Jerry Mumphrey snapped an eighth-inning tie with a three-run homer on August 5, leading the Cubs to an 8-5 victory.

After posting a phenomenal 59-25 record at the All-Star break, the Mets were 17½ games ahead of both Philadelphia and Montreal in the NL East. The Cubs were 24½ games back, mired in fifth place with a record of 45-58. But Chicago had beaten New York three straight games, taking the last two games of a four-game series at Shea Stadium a week earlier and opening this series with a 4-2 win on August 4.

Cubs left-hander Jamie Moyer — in just the seventh start of a career that spanned 638 starts over 25 seasons — came into the game with a 3-2 record and a 5.06 ERA. But the 23-year-old rookie had won his last two starts, with eight shutout innings against the Padres on July 21 and just one run allowed in 7⅔ innings against the Mets at Shea Stadium in the second game of a doubleheader on July 29.

He would face Mets lefty Sid Fernandez, born only a month before Moyer in October 1962 but already in his fourth major-league season. The Hawaii native was 12-4 with a 3.18 ERA.  Selected for the NL All-Star team, he had pitched a scoreless inning — striking out Brook Jacoby, Jim Rice, and Don Mattingly — at the Astrodome on July 15. But Fernandez had struggled in three starts since then, going 0-2 while allowing 18 hits and 12 runs in 15 innings.

Mookie Wilson gave the Mets a quick lead when he smacked his third leadoff homer of the season — and the third of the major-league-record 522 home runs Moyer would allow in his career.

After Wilson’s homer, Moyer retired the next five batters, including two strikeouts to start the second. He then pitched into minor trouble, walking Ray Knight and allowing a single to Rafael Santana. But Moyer fanned Fernandez to end the threat.

Jody Davis opened the Cubs’ second inning with a double on a ball that fell between center fielder Wilson and right fielder Kevin Mitchell. Ron Cey made the Mets pay for the defensive miscue by smacking Fernandez’s 3-and-2 pitch for a home run to right field, giving the Cubs a 2-1 lead.

“I kind of kicked myself for that,” Wilson said afterward. “It was no communication problem. It was really my fault, a mistake on my part and it cost us two runs.”1

The Mets threatened in the fourth when Gary Carter doubled and Mitchell walked, but Moyer got George Foster — who would be released by the Mets two days later — to ground into a force out at third and Knight to hit into a 6-4-3 double play.

In the fifth, Ryne Sandberg walked with two outs, stole second, and scored on a single by Gary Matthews to push the Cubs’ lead to 3-1.

Tim Teufel walked to start the sixth inning for the Mets and advanced to third when Keith Hernandez doubled, but Moyer limited the damage to a single run. He retired Carter on a sacrifice fly that scored Teufel, and Mitchell on a grounder to shortstop. Foster struck out to end the inning.

The Cubs responded in the bottom of the sixth.  Davis led off with another double and Cey walked. The Mets then committed another mental blunder when Manny Trillo attempted to sacrifice. Rather than let third baseman Knight field the bunt, Fernandez cut in front of him. He attempted to backhand the ball but bobbled it, allowing Trillo to reach first on what was ruled an infield single.

Mets manager Davey Johnson had met with Fernandez and his infielders on the mound prior to Trillo’s bunt. “I just got through telling (Fernandez): ‘Let’s make sure of one,’” Johnson said.2

Shawon Dunston followed with a single to bring home Davis and Cey for a 5-2 lead.

Moyer laid down a sacrifice bunt to move Trillo and Dunston up. Johnson removed Fernandez in a double switch, bringing in Doug Sisk to pitch and putting Darryl Strawberry — back in action after missing two games with a bruised thumb — in right field. Mitchell moved to left to replace Foster. With two Cubs in scoring position, Sisk retired Bob Dernier and Sandberg to end the threat.

Moyer breezed through the seventh and remained on the mound to start the eighth. To that point he had allowed just four hits, but Wilson and Teufel started the inning with back-to-back singles. Hernandez followed with a home run to left to tie the game at 5-5.

Lee Smith replaced Moyer and struck out Carter and Mitchell. Danny Heep pinch-hit for Sisk and singled. With Knight at the plate and Smith holding the ball on the mound, Heep attempted to steal second. Smith stepped off the rubber and threw to second to catch Heep for the final out.3

After the game Cubs manager Gene Michael reflected on his decision to let Moyer pitch to Hernandez as the tying run, “I thought Moyer might be able to get the groundball for a double play. I second-guess myself now for not bringing in Smitty right then.”4

Moyer mused, “I’ve just got to blot out the eighth inning and concentrate on what I did before.”5

Roger McDowell took over on the mound for the Mets in the bottom of the eighth. Cey led off with a single; it was the ninth consecutive time he had reached base over the last three games. For the season, he was now 13-for-24 (.542) with 4 homers and 10 RBIs against New York.

“I’m in a good stroke, I feel good,” Cey remarked afterward. “It seems like everything I hit, I hit hard and in the right spot.”6

Leon Durham ran for Cey. Trillo’s single moved him to second. Dunston dropped a sacrifice bunt toward third; Knight threw to second baseman Teufel covering at first, but Teufel pulled his foot off the bag for an error to load the bases.

McDowell got Terry Francona to ground to Teufel, who threw home for the force of Durham. Carter’s relay to first beat Francona for the 4-2-3 double play. The Mets were one out from escaping the jam.

Veteran switch-hitter Mumphrey was called on to bat for Dernier with two runners in scoring position and two outs. He had been acquired by the Cubs in a trade with Houston the previous December for Billy Hatcher and a player to be named later.7

In this at-bat, he connected on McDowell’s 2-and-2 slider and slugged the Cubs’ first pinch-hit home run of the season to put Chicago up 8-5. It was just the second homer McDowell had allowed in 90 innings over the season.

“I’m thinking that he’s thinking that I don’t want to go 3-and-2, so he figures I’ll throw him the sinking fastball,” McDowell explained. “But I threw him the slider. Obviously, he was ready.”8

Earlier in the week, Mumphrey had indicated he wanted to be traded to a contending team. After the game, he remarked, “I wanted to show the Cubs and the rest of the league I can still play. I want to make it easier for this club to move me.”9

In the ninth, Smith worked around a one-out single by Wally Backman to secure the win and even his record at 7-7. McDowell took the loss, dropping his mark to 9-6.

The Cubs victory raised their record to 5-6 against the powerful Mets, but they lost six of the last seven to finish 6-12 against New York for the 1986 season.

The author quickly became a Cub fan once his home received WGN on cable TV in August 1983. Accompanied by his parents and sister, he made his first trip to Wrigley Field for this game and the previous day’s game, shortly before he began college at the University of Arkansas. Before the game, the author was watching batting practice near home plate when Harry Caray walked down the aisle and stopped to autograph a baseball. The ball still sits proudly on the author’s bookshelf in his baseball room. The author’s photo of his encounter with the broadcasting legend appears in Andy Strasberg’s 2012 book Baseball Fantography. 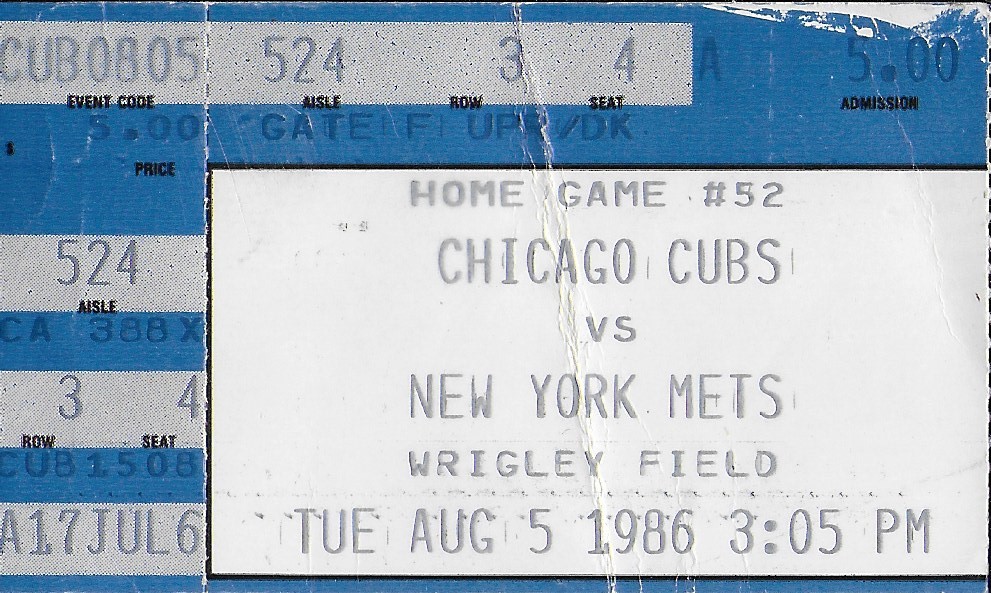 7 The player to be named later turned out to be pitcher Steve Engel. Engel was 1-5 in 11 games for the Cubs in 1986 and never appeared in another major-league game.