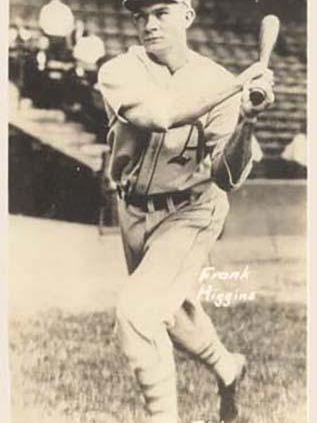 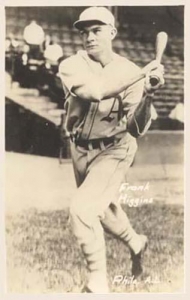 It was the 101st game of the 1933 season for the Philadelphia Athletics. They were consistently average, having spent much of the first four months of the season around the .500 mark.1 Manager Connie Mack’s dynasty was beginning to end. From 1925, when Mack added future Hall of Famers Al Simmons, Jimmie Foxx, Mickey Cochrane, and Lefty Grove to his team’s roster, until 1932, the Athletics had finished first or second in the American League all but one season. This included three consecutive trips to the World Series from 1929 through 1931, when Philadelphia won at least 102 games each season.

By contrast, the 1933 Washington Senators were consistently strong. In each of the three previous seasons, they had won at least 92 games but finished in second or third place. In 1933 the Senators won 65.3 percent of their games in the first half of the season and continued their winning ways with 65.0 percent in the second half. They had captured first place in the AL in late June and hoped to clinch their first pennant since 1925.2 Except for a three-game series in late July, the Senators had recently been playing at home, and on Sunday, August 6, they concluded a lengthy homestand with a game against Philadelphia. Both teams were riding three-game winning streaks.

Approximately “12,000 Sabbath customers”3 showed up to Griffith Stadium for the game. Both teams had players topping the American League’s offensive categories. Philadelphia’s Foxx led the league in home runs (30) and batting average (.356) coming into the contest. Washington, however, had three of the top five batters in the AL: (Joe Cronin at .344, Heinie Manush at .339, and Dave Harris at .336).4

Second-best in the Athletics’ lineup was rookie Mike Higgins (.317), commonly known in baseball history by his childhood nickname, Pinky, but more often called Frank in 1933’s newspaper coverage.5 If fans expected a slugfest, the teams obliged, as Philadelphia outscored the Senators 12-8, and Higgins hit for the cycle.

Higgins had signed with the A’s in June 1930, just past his 21st birthday, after playing for three years at the University of Texas. He appeared in 14 games, batting .250, and then spent the next two seasons in the minors. By 1933 he was the starting third baseman for Philadelphia, and he played in every game of the season.

Washington’s player-manager Cronin “sent a raw recruit to the hill”6 to face the Athletics. Cronin, 26, was in his first year as skipper of the Nats. His team had reclaimed first place in the American League on July 24, after sweeping the Athletics in a doubleheader, and Cronin wanted to stay on top.

In the Nats’ just-completed sweep of the Boston Red Sox, two of his starters had pitched complete games. In what the press referred to as a “pitching experiment,”7 Cronin called on rookie Ed “Butch” Chapman to start against the third-place A’s. This was Chapman’s major-league debut. Recently acquired from the St. Louis Cardinals,8 the 27-year-old right-hander had been in the Cardinals organization since 1927.

Right-hander Sugar Cain started for the Athletics. Pitching in just his second season in the majors, he had a 5.08 ERA. His 7-9 record was indicative of many early departures from the mound; in addition, his season WHIP was 1.748.

Foxx opened the top of the second with a “slam into the open stand back of left”9 for his 31st home run of the season. The Philadelphia Inquirer reported that it was “a cyclopean drive”10 that landed well into the bleachers. Ed Coleman followed this with a single, and rookie Bob Johnson walked, bringing up Higgins, who “sledged a humming triple to the nook in centre”11 for two runs batted in. Dib Williams’s fly out to left brought Higgins home with Philadelphia’s fourth run.

Washington got a run back in the home half. Fred Schulte led off with a walk but was forced at second on Joe Kuhel’s grounder. Ossie Bluege flied out for the second out and then, “by an act of Providence,”12 left fielder Johnson lost Luke Sewell’s fly ball in the sun, resulting in a run-scoring double. Chapman grounded out to end the inning.

In the top of the third, Doc Cramer’s leadoff triple “blasted [Chapman] off the hill.”13 Chapman was out after facing only 11 batters, and veteran Tommy Thomas came on in relief. Cochrane greeted Thomas with a single, and Cramer scored the fifth and final run charged to Chapman. After Foxx was retired, Coleman walked. With two outs, Higgins drove in another pair of runs with a double that banged against the right-field wall. Williams traded places with Higgins with another double, and the A’s had run the score to 8-1.

Philadelphia’s seemingly comfortable lead melted over the next few innings. Cain walked Buddy Myer to start the bottom of the third. Manush singled, and the Senators had a rally. Williams fielded Cronin’s grounder to short, but his “wild throw paved the way for three more enemy markers,”14 as both Myer and Manush scored, and Cronin ended up on third. Harris flied out to left, deep enough for Cronin to tag and score, cutting Philadelphia’s lead to four runs.

Washington’s comeback continued in the sixth, Schulte walked for the third time, the fourth leadoff walk for the Senators and Cain’s sixth free pass of the game. Kuhel flied out, and Bluege worked a base on balls. Sewell’s grounder to short forced Bluege at second, and Washington had runners at the corners with two outs. Goose Goslin pinch-hit for Thomas and Cain walked him as well, loading the bases.

A’s manager Mack replaced Cain, who had “walked himself out of the game.”15 Rube Walberg, who had split time as a starter and reliever for the Athletics, entered in relief. Walberg walked Myer, the first batter he faced, to bring in Schulte with Washington’s fifth run. Manush then cleared the bases with a three-run triple that bounced off the fence in right. Cronin flied out to end the inning, but the Senators had come all the way back to tie the game.

Jack Russell, making his 35th appearance of the season, replaced Thomas on the mound in the seventh. It took only three batters for Higgins, who had grounded out to end the fifth inning, to undo Washington’s rally. The rookie “interrupted one of Russell’s pitches”16 with a “booming home run blast that plopped into the distant left field bleachers.”17 Thanks to Higgins’s ninth homer of the season, Philadelphia had regained the lead, 9-8.

An inning later, Philadelphia added an insurance run. Walberg led off with a double and advanced a base on Max Bishop’s sacrifice bunt. After Cramer struck out, Cochrane walked. Foxx’s single plated Walberg, giving the A’s a two-run cushion.

Philadelphia’s offensive outburst was not over. Bobby Burke pitched the ninth for Washington. He started the frame by walking Johnson. Higgins, who had three extra-base hits (double, triple, and home run) to this point in the game, stroked a single to complete the cycle. He was subsequently forced at second base by a Williams grounder. Walberg’s grounder to first baseman Kuhel turned into an error, allowing Johnson to score and Williams to go to third. Bishop successfully executed a squeeze bunt, and Williams scored Philadelphia’s 12th run. Walberg walked Harris to start the bottom of the ninth, but then he retired the next three batters on fly outs to end the game and earn the victory.

Even beyond the final score, this was indeed a wild game. Cain and Walberg combined to issue 11 walks to the Washington batters, allowing the Nats to score eight runs on only six hits. Each team left eight runners on base. Russell was the losing pitcher. Cronin’s pitching experiment turned out to be Chapman’s only start of his major-league career, and it lasted just two innings. He appeared in five more games (all in relief) for the Senators, and in 1934, he was back in the minors, where he pitched through 1940, never returning to the big leagues.

In hitting for the cycle in a 4-for-5 performance, Higgins raised his batting average to .324. The Washington Evening Star described Higgins as “plain poison to all of Washington’s hurlers.”18 He had scored three runs and driven in five. This was the fourth time he had collected at least four hits in a game. He stayed hot for the rest of the season, finishing with a .314 average while hitting 13 homers and driving in 99 runs.

Higgins was one of eight players in 1933 to hit for the cycle.19 In a remarkable 11-game stretch, three members of the Athletics did it: Cochrane on August 2, Higgins on August 6 and Foxx on August 14.

The Senators lost their next two games (an August 7 doubleheader to the New York Yankees) before winning 13 games in a row to solidify their hold on the AL pennant. They lost the 1933 World Series to the New York Giants in five games. The Athletics finished the season in third place, winning 28 of their final 51 games.

Although Higgins was the offensive hero in this game, Foxx was 2-for-5 with a home run and two runs batted in. His round-tripper gave him a six-homer lead over Babe Ruth in the majors.20 That kept him atop the batting and home-run leaderboards. Foxx finished the season winning the Triple Crown in the American League, with 48 home runs, 163 RBIs, and a .356 batting average (the HR and RBI led all major leaguers and were the highest numbers ever posted by a Triple Crown winner to that point).21 He became the first AL batter to win the Triple Crown since Ty Cobb in 1909. He added to this remarkable 1933 season by hitting for the cycle, being named to the AL squad in the inaugural All-Star Game22 and winning his second consecutive American League Most Valuable Player Award.

1 The Athletics had a slow April (6-10), followed by a strong May (15-6), but then they seemed to settle into a pattern of never getting more than a few games above or below .500 for the rest of the season, until they won 17 of 26 games in September to finish the season at 79-72. This was their last winning season until 1948.

5 Higgins’s proper name was Michael Franklin Jr. According to his SABR biography, Higgins was nicknamed Pinky as an infant. The newspapers cited in this article labeled him Frank as a rookie, but by the time he became the manager of the Boston Red Sox, he was called Mike. Interestingly, the Washington Evening Star listed him as Bob Higgins.

8 Chapman was traded by the St. Louis Cardinals to the Senators on August 1, 1933, in exchange for cash and aplayer to be named later. That player was Bill McAfee, who reported to St. Louis in December 1933. The Allentown (Pennsylvania) Morning Call reported that Chapman came to the Athletics from the Rochester Red Wings (of the International League). See “A’s Get to Washington Hurlers to Hang Up 12-8 Win on Senators,” Allentown Morning Call, August 7, 1933: 12.

20 The season ended in the same order, with Foxx leading the majors with 48 home runs and Ruth second-best with 34.

21 The author consulted Baseball-Reference.com’s table of Triple Crown winners. The next year (1934), New York Yankees star Lou Gehrig won the Triple Crown, besting all of Foxx’s numbers from the 1933 season.

22 Foxx was named as a reserve but did not play in the game.