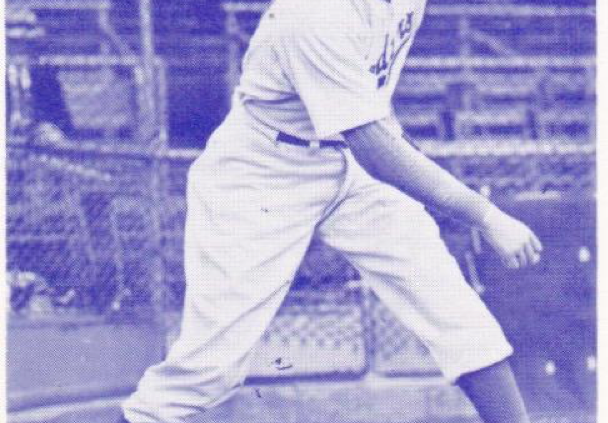 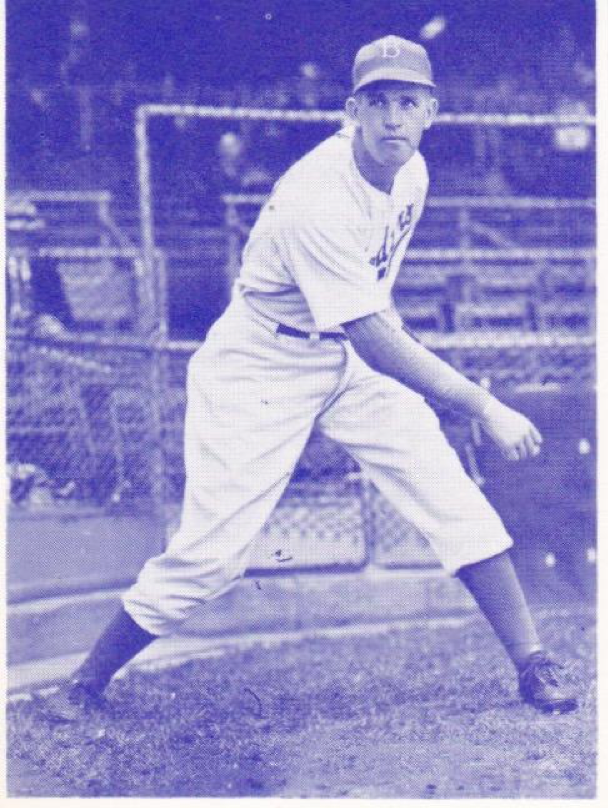 For a while, Boston National League fans who saw Brooklyn play at Braves Field had a decent chance of seeing a lot of extra baseball.

After spending much of the 1920s and 1930s out of contention, Brooklyn entered a new decade on the rise under scrappy player-manager Leo Durocher.1 Entering July 5, the “Brooks” owned first place in the National League by one game over the Cincinnati Reds and five games over the New York Giants. Durocher’s team had won five straight games – including a doubleheader sweep of the Giants the previous day – and nine of their last 10.

Dodgers among the league leaders included rookie shortstop Pee Wee Reese, second in stolen bases with nine, and swingman pitcher Vito Tamulis, a Boston-area native whose 1.99 ERA was best among qualifying hurlers.2 Offensive stars included outfielders Dixie Walker and Joe Medwick, the latter a recent arrival from the St. Louis Cardinals, who reached the .300 mark for the season, and first baseman Dolph Camilli, whose 23 home runs and 96 RBIs paced the team.3

Their hosts, the Bees,4 hadn’t finished as high as third place since 1916. Unlike Durocher’s Dodgers, Casey Stengel’s5 Bees hadn’t roused themselves out of their torpor. They entered the day in seventh place with a 23-37 record, 18 games back. As the weather heated up, the Bees cooled down. They compiled a 9-17 record in June and 9-24 in July, digging a hole they couldn’t escape.

Bees outfielder Chet Ross led the NL with nine triples as of July 5; he went on to pace the team in homers (17) and RBIs (89) for the season. Pitcher Joe Sullivan ranked fourth in the NL in walks with 48. His wildness played an important role in the climax of the game. Two other Bees, third baseman Sibby Sisti and catcher Phil Masi, were notable for their persistence, as both would be members of the 1948 Braves team that won the NL pennant.

Only 3,881 paying fans attended the Friday afternoon game.6 Righty Luke Hamlin, with a 5-4 record and a 3.42 ERA in 14 games, started for Brooklyn. In his previous start, on June 30, the Bees knocked him out in the third inning of a 7-2 Boston win. Righty Al Piechota, in his ninth big-league game, started for Boston, bearing a 2-3 record and 4.72 ERA. He’d pitched complete games in his two previous outings, against the Pittsburgh Pirates and Giants, and had never faced Brooklyn.

A familiar face came back to haunt the Dodgers in the first. With two out, right fielder Gene Moore singled. Moore had played for the Dodgers in 1939 and at the start of 1940, but was sold to Boston on May 29.7 Moore stole second and moved to third on a wild throw by catcher Babe Phelps. Ross’s single drove him in for a 1-0 Boston lead. The Bees did not stir again until the fifth, when they moved a runner to third with two out but failed to drive him in.

Piechota held the Dodgers hitless for five innings. They rallied in the sixth, starting with one-out singles by Reese and Cookie Lavagetto. One out later, Medwick singled to load the bases, and a walk to Phelps handed the visitors the tying run.

The Bees collected two hits and a walk in the seventh, loading the bases with one out, but Hamlin got Piechota to foul out and Buddy Hassett to line to shortstop. In the top of the eighth, the Dodgers put runners on first and third with one out, but Phelps grounded into a double play.

A third straight complete game was not in the cards for Piechota. Camilli and Joe Vosmik singled to start the ninth, and Stengel summoned Al Javery from the bullpen. Pete Coscarart’s fly to left scored Camilli for a 2-1 Brooklyn lead, after which Javery closed the door on the visitors.

Hamlin retired the first two Bees in the bottom of the ninth and was one strike away from a complete-game win.8 But shortstop Eddie Miller doubled and Masi, who had entered the game in the eighth, singled to tie the game, 2-2. Hamlin got Rabbit Warstler, pinch-hitting for Javery, to fly to right, and the battle entered extra innings.

Stengel and Boston coach George “High Pockets” Kelly didn’t officially get to see the end of it. With two Dodgers on and two out in the 10th, home-plate umpire Bick Campbell – whose ball and strike calls were disputed all game9 – turned away from the plate and walked toward the Boston bench as reliever Sullivan pitched to Camilli. Camilli flied out, but Campbell nullified it, saying he had called time. Stengel and Kelly were thumbed for protesting.10 Sullivan then retired Camilli a second time to end the inning. The Boston Globe noted that neither Sullivan nor Camilli had apparently heard the time-out call, “if it was made.”11

After Hassett led off the bottom half with a double, Hugh Casey took over on the mound for Brooklyn. Casey worked 9⅓ shutout innings, scattering six hits and striking out three. One account classed Casey as “the outstanding twirler of the contest,” although he spent much of his outing working out of jams.12

Casey walked eight batters, though that figure is deceiving. During Boston rallies in the 10th, 11th, 12th, 15th, and 17th innings, Casey intentionally walked a Bees hitter to reach a weaker hitter or set up a groundball out.13 He escaped all five situations unscathed, three of them through double plays, with middle infielders Reese and Coscarart repeatedly coming up big.14 Masi grounded into inning-ending twin killings in both the 15th and 17th. “Just why the Bees couldn’t score in the overtime will remain an everlasting mystery,” the New York Daily News wrote.15

For the Bees, Sullivan worked 10 innings of relief, and the Dodgers’ bats stayed mostly quiet. In the 13th, Masi dropped Phelps’ foul pop. Phelps took advantage of his lease on life with a single – but was thrown out trying for second. Medwick was forced from the game in the 15th when Sullivan hit him on the wrist; Jimmy Wasdell took his place in left field.16 The Dodgers put runners on first and third with two out in the 19th with a single, a stolen base, a sacrifice, and a walk, but Lavagetto’s fly to right ended the opportunity.

Durocher continued to micromanage in the bottom half. Moore walked and moved to second on a groundout. Tamulis entered the game to issue another intentional walk – this time to Max West – and was yanked in favor of rookie righty Newt Kimball, who retired the next two batters.17

The Dodgers finally broke the deadlock in the 20th. Walker, who moved from center field to right and back to center over the course of the game, lined a single off Sullivan’s glove.18 Wasdell tried a bunt, which Sullivan threw past Hassett;19 the runners reached second and third.20 Stengel tried a bit of Durocher’s strategy, intentionally walking catcher Gus Mancuso.

Durocher called his own number and ran for Mancuso – one of 62 appearances the 34-year-old Durocher made for Brooklyn that year, his last season of semi-regular play.21 Up next was Camilli, 1-for-8 so far. Sullivan walked him, giving Brooklyn a 3-2 lead on its second bases-loaded walk of the game.

The only question was whether Brooklyn could nail down the win before darkness descended.22 Masi and Johnny Cooney, pinch-hitting for Coffman, walked.23 Durocher called for his fifth pitcher, righty Tex Carleton, who had thrown a no-hitter against Cincinnati on April 30. Carleton retired Hassett on a fly ball and Sisti and Moore on grounders to seal the victory.

Kimball, who faced four hitters and walked two of them, got the win; Sullivan took the loss; and Carleton retroactively earned a save.24 Hassett had a tough day, going 1-for-10. His teammate West went 4-for-7 with three doubles and a pair of walks, but no RBIs. The victory provided relief for the Brooklyn Eagle newspaper, which reported that its phone lines were jammed for an hour and a half by Dodgers fans looking for news.25

Cincinnati pulled away from the Dodgers in the second half of the season, though the Dodgers’ 88-65 record26 and second-place finish represented another step toward respectability. Boston finished in seventh at 65-87. The teams’ record for the longest game by time has long since been broken. As of spring 2022, that distinction belonged to the May 8, 1984, game between the Chicago White Sox and Milwaukee Brewers, which took 8 hours and 6 minutes (and 25 innings) to resolve.

1 Brooklyn won the National League championship in 1920 and finished second in 1924. Other than that, their best finish between 1920 and 1938 was third place in 1932. In his first season as manager, Durocher’s 1939 team finished third, showing a 15-win improvement over the previous season.

2 Tamulis couldn’t keep it up, though he finished with a solid 3.09 ERA in 41 appearances.

3 Brooklyn gained another weapon on July 23 when outfielder Pete Reiser made his debut. Reiser hit .293 in 58 games – a warm-up for 1941, when he hit a league-best .343 and led or tied for the NL lead in doubles, triples, and runs scored. However, he was not yet on the team on July 5.

4 1940 was the last of five seasons when the Boston National League team, commonly known as the Braves, used the Bees name. According to Ray Miller’s SABR Biography Project article on Braves Field, their home park was officially known as National League Field during the Bees years, with an unofficial nickname of “the Beehive.” Article accessed May 10, 2022.

5 Stengel had previously served as Brooklyn’s manager from 1934 through 1936 and had also played for both the Dodgers and Braves.

7 The Dodgers had owned Moore’s rights in the 1935-1936 offseason, but traded him to the Bees before he appeared in a regular-season game with Brooklyn. The Bees traded him back to Brooklyn in December 1938; the Dodgers then sold him back to Boston in May 1940. Moore was Dodgers property again for much of the 1942 season but, again, did not appear in a regular-season game with the team.

10 Kelly was ejected once in a 16-season playing career and four times in an 11-season coaching career; this was his last ejection. Umpire Campbell led the NL in ejections for the second straight season in 1940, awarding early exits to 12 managers, coaches, and players.

16 Medwick was not seriously injured and started the next day’s game.

19 One account of the game (O’Leary, in the Boston Globe) had the throw hitting the runner.

22 National League Field/Braves Field did not get lights until 1946. Even if the park had had lights in 1940, they could not have been used: The National League did not allow the completion of day games under lights until 1950. For an example of a day game that was called early rather than be completed under lighting, see Kurt Blumenau, “October 2, 1949: Browns End Season on High Note with Rookie Ed Albrecht’s 1-Hitter,” SABR Games Project, accessed May 17, 2022.

23 Cooney is listed in Retrosheet as one of only two coaches for the Bees that year. Presumably, he was also serving as acting manager at this point in the game, following the ejections of Stengel and Kelly in the 10th.

24 The major leagues did not recognize saves as an official statistic until 1969. This was the seventh of eight saves earned by Carleton in his career; the last one came in the first game of an August 14, 1940, doubleheader against the Phillies.