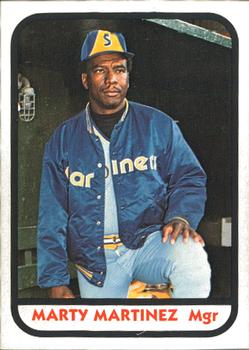 Marty Martinez enjoyed a long and accomplished baseball career that spanned four decades. The Cuban-born utilityman played parts of seven seasons in the major leagues. He managed eight seasons in the minors. And he really made an impact as a scout, signing and nurturing Hall of Famer Edgar Martinez and longtime star Omar Vizquel.1

Martinez’s career also includes one negative note that time cannot erase. As of September 2020, he is one of eight people who are officially credited with managing a single major-league game —and losing it.2 It was his misfortune, on his only day as a big-league skipper, to face off against the eventual American League champions.

The day was May 8, 1986. The Seattle Mariners were off to a slow start, sitting in sixth place in the AL West with a 9-19 record. The team had already posted two six-game losing streaks and had hit another skid, losing its fourth straight game on May 7 against Boston. In the 11-5 loss, manager Chuck Cottier was ejected for arguing an interference call, and Red Sox pitcher Al Nipper decked Seattle outfielder Phil Bradley after hitting him with a pitch.3 Cottier was fired shortly after noon the next day.4 “It’s not even that we were not playing well,” Seattle shortstop Spike Owen said in summing up the state of the team. “It’s that we weren’t playing at all.”5

First-base coach Martinez was asked to fill in because he was so well-liked by the players, according to Club President Chuck Armstrong.6 Martinez had managed several years in the minor leagues in the Texas Rangers’ organization and had been a member of the Seattle coaching staff since 1984.

In contrast, the visiting Boston Red Sox were playing competitive baseball in the early going. Manager John McNamara’s team sat in third place in the AL East with a 16-10 record, 1½ games behind the Cleveland Indians and New York Yankees. Pitcher Roger Clemens was off to a 5-0 start with a league-leading 49 strikeouts — a record-setting 20 of them collected in a single game against the free-swinging Mariners on April 29.7 Also, third baseman Wade Boggs had the league’s third-best batting average at .361.

McNamara’s starting pitcher was right-hander Mike Brown, who had accumulated a 1-0 record and a 3.65 ERA in three previous games but was knocked out in the fifth inning in his previous start. Martinez gave the ball to righty Mike Morgan, who was pitching for his fourth big-league team in six seasons. Morgan entered the game with a 2-2 record and a 2.12 ERA, and had allowed only two hits over seven innings in his previous start. Reflecting Seattle’s struggles, only 8,319 fans turned out to the Kingdome for the Thursday night game.

Boston’s first hitter, right fielder Dwight Evans, doubled to center field. That set the tone for the night, as the Red Sox put a runner into scoring position in every inning except the ninth. Morgan managed to escape by getting Boggs to ground back to the mound, first baseman Bill Buckner to line out to second, and left fielder Jim Rice to strike out.

The Mariners gave their rookie manager a lead in the bottom of the inning. Leadoff hitter Owen tripled into the right-field corner and left fielder Bradley drew a walk. First baseman Alvin Davis grounded to Buckner, who threw away the ball while trying to start a double play.8 The error allowed Owen to score, Bradley to reach third, and Davis to reach second —still with nobody out. Brown needed three big outs, and he got them. Designated hitter Gorman Thomas grounded back to the mound, right fielder Ivan Calderon grounded to third, and second baseman Danny Tartabull flied out to right. The Sox held the Mariners to a single run.

In the second, each team collected a double but could not advance the runner beyond second. In the third, each team got a runner to third but could not get him across the plate. Rice struck out with Evans on third to end the top half of the inning. The Mariners put runners on first and third with nobody out, only to kill off their promising rally with a strike-’em-out, throw-’em-out double play involving Thomas and Davis, followed by a strikeout by Calderon on a “wicked breaking pitch” by Brown.9

The Red Sox continued to tantalize in the fourth. Designated hitter Don Baylor singled, catcher Rich Gedman was safe when Tartabull misplayed a potential double-play ball, and second baseman Marty Barrett sacrificed them to second and third. But Morgan had reached the bottom of the Boston lineup, and center fielder Steve Lyons and shortstop Ed Romero each struck out to end the threat. Tartabull atoned for his error by slamming a leadoff homer to left field in the bottom half, making the score 2-0, Seattle, through four.10

In the top of the sixth, the Red Sox and their fans might have wondered if the team was ever going to score. With one out, Gedman singled and Barrett doubled him to third. Lyons grounded back to Morgan, who caught Gedman in a rundown for the second out while Barrett advanced to third. Lyons took second on a wild pitch, but Barrett had to stay on third, and Romero grounded out to third to end the inning. Boston was now 0-for-13 with runners in scoring position.11 Brown continued to pitch doggedly despite these frustrations. He shut out the Mariners in the bottom half, striking out Thomas and Tartabull.

Two-thirds of the way to a loss, the Red Sox finally found the key to break through. With one out in the seventh, they struck for four straight singles from Boggs, Buckner, Rice, and Baylor. The game was tied 2-2 with Boston runners on first and second. Martinez summoned lefty pitcher Matt Young, who got Gedman on a fly ball to center for the second out, with Rice advancing to third.

Martinez changed pitchers again, bringing in righty Karl Best to face Barrett. After Baylor stole second,12 Barrett ripped a triple to left-center field on a full count to score Rice and Baylor, giving Boston a 4-2 lead. “When you’re hot like us,” Barrett said after the game, “you’re just waiting for something to happen. You’re just expecting the clutch hit. And then it happens.”13 That said, the Red Sox went right back to being frustrating in the next inning. With two out in the eighth, consecutive singles by Boggs and Buckner put a runner on third, but Rice flied out to right field to end the frame.

Brown had pitched resolutely all night, but when he walked Bradley with one down in the eighth, McNamara called in Joe Sambito to replace him. Sambito got Davis to ground out to Buckner at first, who took it himself. With Bradley on second, McNamara then beckoned Bob Stanley to the mound for his ninth appearance of the young season. Stanley got Thomas to fly out to center for the third out.

After Boston’s only one-two-three inning of the night, Stanley came back out for the ninth. The Mariners made things interesting one last time: With one out, Tartabull doubled to right field, and third baseman Jim Presley advanced him to third with a groundout. Martinez sent Ken Phelps to pinch-hit for center fielder Dave Henderson, who was hitless in three at-bats. Representing the tying run, Phelps whiffed —the Mariners’ ninth strikeout —to wrap up the game in 2 hours and 58 minutes. Martinez was not shy about his frustration afterward, telling reporters, “You want to win so badly and nothing materializes. It’s the kind of game that makes you want to go home and kick the dog.”14 Brown earned his second win, Morgan took the loss, and Stanley was credited with his fifth save.

Brown’s outing must have impressed the Mariners. On August 17 Seattle shipped Henderson and Owen to Boston in exchange for Brown, Rey Quinones, Mike Trujillo, and John Christensen. Henderson played a big role in Boston’s stretch run to the World Series, while Brown appeared in a total of seven games for Seattle.

The M’s were rumored to have their eye on Dick Williams15 as a hard-nosed replacement for the easygoing Cottier. They wasted no time announcing his hiring on May 9.16 He took over immediately, but couldn’t effect much improvement, posting a 58-75 record the rest of the way. Martinez indicated he was pleased to resume his coaching role, telling reporters, “I wouldn’t want to manage in this situation.”17 He remained with the Mariners organization in a variety of roles, including director of Latin American scouting, minor-league manager, and major-league third-base coach. When Martinez died at age 65 in 2007, his one day as a big-league manager might have been the least of his accomplishments in baseball.

In addition to the specific sources cited in the Notes, I used the Baseball-Reference.com and Retrosheet.org websites for general player, team and season data and the box scores for this game:

2 According to Baseball-Reference, the other one-game, one-loss managers are Bill Holbert of the 1879 Syracuse Stars; John Bickerton of the 1884 Washington Nationals; Roy Johnson of the 1944 Cubs; Rudy York of the 1959 Red Sox; Eddie Yost of the 1963 Senators; media mogul Ted Turner, with the 1977 Braves; and Tom Prince of the 2019 Pirates. As of September 2020, only Turner and Prince are alive, and Prince would appear to be the only member of the group with a real chance of getting another big-league managing job. Information derived from https://baseball-reference.com/managers/index.shtml.

7 Seattle batters struck out 1,148 times in 1986, leading the American League by a sizable margin.

12 The 37-year-old Baylor had only three stolen bases for the Red Sox all season, while being caught five times.

15 Williams had been Martinez’s manager during the latter’s 22-game stint with the 1972 Oakland A’s, and had also managed the “Impossible Dream” 1967 Red Sox to the World Series. One of Williams’s players in Boston was outfielder Jose Tartabull, the father of the Mariners’ Danny Tartabull.