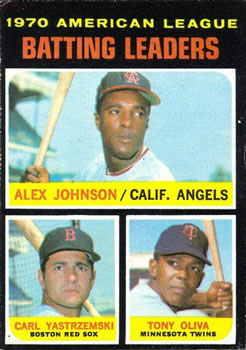 On the final day of the 1970 season, October 1, Alex Johnson had unfinished business. The 27-year-old California Angels outfielder had climbed atop the American League batting race by going 3-for-4 against the Oakland A’s on September 20. Johnson continued his hot hand, holding the league lead, ahead of either Boston’s Carl Yastrzemski or Minnesota’s Tony Oliva, until Yastrzemski edged ahead of him on September 29. Now, with one game remaining in the season, Johnson could pass Yastrzemski, and claim the batting title if he put together a good day at the plate against the visiting Chicago White Sox.

Yastrzemski had completed his season on September 30 with a batting average of .3286, just .0013 ahead of Johnson’s .3273. Johnson needed at least two hits, and perhaps three, to grab the AL batting championship.1 Johnson was not the popular choice to come out on top. Everywhere he played throughout his 13-season, 8-franchise major-league career, Johnson feuded with his manager and teammates, and he seldom spoke to reporters.2

The White Sox also had aspirations – though less glorious – as the season came to a close. Chicago hoped to stop a six-game losing skid and avoid extending the franchise’s record for losses in a season to 106. Chicago’s futility already exceeded that of the 1932 White Sox, who lost 102 games.

Chuck Tanner, appointed White Sox manager in September after piloting the Angels’ Triple-A team in Honolulu for three seasons, sent rookie Gerry Janeski, a right-hander with a 10-17 record and 4.87 earned-run average, to the hill. Janeski had won both his previous starts against California, most recently a complete-game 11-4 win on September 9 in Chicago. Janeski had some success against Johnson, holding California’s cleanup hitter to two hits in seven at-bats.

Angels manager Lefty Phillips selected 23-year-old left-hander Greg Garrett to start the finale. Garrett (5-6, 2.93 ERA) had spent most of the season in the bullpen; he was starting for just the seventh time in 32 appearances.

Garrett started well, facing only three Chicago batters in the top of the first. He walked José Ortiz, who was erased in a double play.

Instead of penciling Johnson into his usual fourth spot in the batting order, Phillips had Johnson leading off – a strategy intended to get him as many chances to hit as he might need. Johnson felt fatigued, and compensated by borrowing Billy Cowan’s lighter bat.3

His first time up, in the Angels’ first, Johnson bounced out to the second baseman, lowering his average to .3267 and raising the pressure. He now trailed Yastrzemski by .0019.

California did not score off Janeski in the first, and neither team scored in the second. In the third, with one out, Johnson lined a single to right. He took second when shortstop Rich McKinney bobbled a grounder off the bat of Tony Gonzalez, and Johnson scored an unearned run when 22-year-old rookie Mickey Rivers singled. With the hit, Johnson’s average reached .3278; he trailed Yastrzemski by .0008.

California got another run in the fourth. Chico Ruiz, who had replaced Sandy Alomar at third base as the Angels substituted freely, singled, and went to second on an error by White Sox first baseman Carlos May. Ruiz reached third on a groundout and he scored the Angels second unearned run when Marty Perez grounded to shortstop.

With one out in the fifth, Johnson came to bat for the third time. The Chicago Tribune described what happened next: “Johnson hit Janeski’s first pitch, and sent a high bouncer along the third base line. Bill Melton made a backhanded stab, and gunned across to first, but Johnson, who immediately left the game to a standing ovation, beat the toss by a stride and a half.”4

Johnson’s second single raised his average to .3289. By .0003 point, he had surpassed Yastrzemski for the 1970 AL batting title – the first batting crown in the Angels’10-year history.5 Johnson said his sudden removal from the game, and the congratulatory cheers of the crowd, caught him by surprise.6 He had been told before the game that he needed three hits to win the title, but when Jay Johnstone came out to run for him, Johnson “figured I must be in the lead.”7

A United Press International story appearing in the Quincy (Massachusetts) Patriot Ledger called the title tainted because Johnson did not play the entire contest.8 The article cited a baseball adage that “hitters aren’t supposed to win the batting championship while sitting in the dugout.”9

That criticism is unfair. First, Johnson did not win by sitting in the dugout, but by collecting two hits while at the plate. Second, over the course of the season Johnson had 48 more at-bats than Yastrzemski (614 to 566), and collected 16 more hits. The crown was justly his.

California did not score in the fifth, but in the sixth it added another run. Rivers, the first batter, lined a double to right and Jim Spencer shot a single into center field to bring him home. California was ahead, 3-0, and it maintained that lead until the ninth.

The Angels came within a strike of a shutout. Reliever Eddie Fisher, who replaced Garrett to begin the eighth, retired the first two Chicago batters in the ninth on fly balls, before Chuck Brinkman hit a solid single to right. Pinch-hitter Gail Hopkins singled to center, and Brinkman stopped at second.

With two out and the count 0-and-2, Walt Williams homered over the left-field wall to tie the game, 3-3. It was just Williams’s third home run of the season, and his first since June 13 – a stretch of 185 at-bats without a homer.

Bart Johnson, a 20-year-old who had thrown 5⅔ innings against the Angels on September 28, pitched the bottom of the ninth. He struck out the first batter he faced before surrendering a double to Doug Griffin. But two more strikeouts ended the inning; the season finale would go extra innings.

Neither the White Sox nor Angels were able to put a runner on base over the next three innings. Ken Tatum pitched all three innings for California; Chicago’s Barry Moore threw the 10th and 11th, and Jim Magnuson pitched the 12th. For Moore, it was the final two innings of his major-league career.

California called on left-hander Rudy May to pitch the 13th. He retired lefty-hitting Hawaiian John Matias on a fly ball in Matias’s final major-league at-bat.

Melton stepped to the plate with one down, and with a powerful right-handed swing he sent his 33rd home run of the season over the left-field wall, giving Chicago its first lead, 4-3. (Melton again hit 33 home runs in 1971, a figure good enough to lead the AL.)

When Carlos May followed Melton’s smash by beating out a grounder to shortstop, suddenly the White Sox threatened to blow things open. Instead, McKinney struck out while May was attempting to steal, and catcher Joe Azcue fired the ball to second baseman Griffin, who tagged May for a double play.

Magnuson returned to the mound in the bottom of the 13th. Gonzalez, who had singled twice and reached base on an error, tapped a grounder back to the pitcher for the first out.

Rivers walked, then raced for home on a double to left by pinch-hitter Cowan. Rivers scored when he “knocked the ball from the clutches of White Sox catcher Chuck Brinkman,”10 who was charged with an error – marking the third time California logged an unearned run.

Magnuson intentionally walked Ruiz to set up a double play, then was relieved by Danny Murphy. Mel Queen – originally an outfielder before converting to pitching – hit for Azcue, and drilled a single on Murphy’s final major-league pitch. Cowan sprinted home from second for a 5-4 win. Magnuson was charged with the loss, finishing 1-5, while May improved his record to 7-13.

Chicago ended the season with seven consecutive defeats and the worst record in franchise history, 56-106. California was on a five-game winning streak when the curtain fell, and their 86 victories tied the 1962 Angels for the most in franchise history.

On August 16 Johnson had been hitting .319, third behind Yastrzemski’s .332 and Oliva’s .321. But Johnson hit .355 from August 17 to season’s end, outperforming the two future Hall of Famers. As Angels manager Phillips said after the game, “He deserved to win it and he did.”11

In addition to the sources cited in the Notes, the author consulted Baseball-Reference.com and Retrosheet.org for pertinent information, including the box score. The author also relied on game coverage in the Boston Globe, Chicago Tribune, Los Angeles Times, and Long Beach Press-Telegram, and SABR Baseball BioProject biographies for several players involved in the game.

5 Through 2021 it is the only batting title in franchise history.