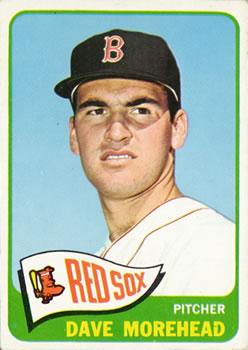 Dave Morehead was sometimes stingy with hits. A graduate of San Diego’s Hoover High School—the same school that Ted Williams had attended—he broke into the majors with the Boston Red Sox at the age of 19 in 1963. His first game was a five-hit shutout of the Washington Senators on April 13. He threw a one-hitter against Washington on May 12—the only hit a first-inning homer. On July 2 he threw a two-hit win, the first hit coming on a freak bounce in the eighth. On July 6, a three-hitter. At the end of his rookie year, he was 10-13 with a 3.18 ERA for a team with a losing record (76-85).

The 1965 Red Sox lost 100 games. (They won 62.) It’s the first time they’d lost that many games since 1932. Morehead had regained some of what he’d lost in his sophomore year, with a 4.06 ERA and a 10-18 record. He’d piled up a few impressive wins near the end of the season: a three-hitter on August 26, two hits over six innings on August 31, a three-hit 1-0 shutout of the Yankees on September 4. He lost a game to the first-place Minnesota Twins on September 10.

On September 16 Morehead started a game for manager Billy Herman at Fenway Park against the Cleveland Indians. Cleveland manager Birdie Tebbetts had 24-year-old Luis Tiant, who was 11-10 in his first full major-league season, start for fifth-place Cleveland. Boston was in ninth place in the 10-team American League, 37 games behind the Twins. The Red Sox weren’t going anywhere, but they were hoping to avoid last place. The Indians were only four games behind second-place Baltimore and had a shot to climb in the standings.

The Red Sox had lost four of their last five games. So had the Indians.

It was a Thursday afternoon. The Red Sox weren’t drawing all that well. Only 1,900 had attended Wednesday night’s game, and just 1,247 came out for this one.1

Shortstop Dick Howser led off for Cleveland. He grounded out to shortstop. Morehead struck out third baseman Max Alvis. The left fielder, Leon Wagner, fouled out to catcher Bob Tillman.

In the bottom of the inning, Boston center fielder Jim Gosger singled. He was forced at second. Tiant struck out Carl Yastrzemski and got Tony Conigliaro—at age 20 tied with Detroit’s Willie Horton for the AL lead in home runs with 28—to fly out to center.2

Rocky Colavito walked to lead off the Indians second, taking a pitch on a 3-and-2 count,3 but Morehead struck out the next three batters. Tiant retired the Red Sox in order.

In the third, Morehead got two groundouts and a fly-ball out. Tiant got Tillman to fly out to second base, then struck out Morehead and Gosger.

Neither pitcher saw the ball leave the infield in the fourth. Morehead got a strikeout and two groundouts. Tiant got a groundout and two strikeouts.

First baseman Fred Whitfield flied out to center field leading off the Indians fifth. Two groundouts, both third to first, followed. A fly ball to first, a foul pop to the catcher, and a strikeout, and Tiant retired the side as well.

Morehead struck out the first two men he faced in the sixth and got Howser to ground out to short. The Red Sox scored a run. With two outs, Gosger beat out an infield single. Third baseman Dalton Jones tripled to the Boston bullpen in right-center, driving in Gosger. It was 1-0. Yastrzemski flied out to left.

The sparse crowd had begun to notice that the Indians had no hits.4 And Cleveland third-base coach Solly Hemus had started to yell to Morehead about it during the sixth, hoping to rattle the young pitcher.5

It was three up, three down for the Indians in the seventh. Alvis grounded out, Dalton Jones at third base to Lee Thomas at first. Wagner flied out to Conigliaro in right field. Colavito—still the only Indian to have reached base, on the walk back in the second—grounded to Eddie Bressoud at shortstop.

After Conigliaro struck out, Thomas hit a solo home run into the right-field grandstand, giving Morehead and the Red Sox an insurance run and a 2-0 lead. Second baseman Félix Mantilla grounded out to first base, Tiant covering. Bressoud singled, but Tillman flied out to right.

In the eighth, Cleveland’s Whitfield grounded out to first, Morehead taking the throw for the out. Center fielder Chuck Hinton struck out. Tebbetts had Bill Davis pinch-hit for Pedro González; he flied out to center field.

Tiant had given up only five hits. He’d walked no one. He pitched the bottom of the eighth. He struck out Morehead and Gosger. Dalton Jones bunted for a base hit, then stole second base, but Tiant registered his 11th strikeout of the game, whiffing Yastrzemski.

It was the ninth inning. Morehead, who had turned 22 years old just 11 days earlier, took the mound with a no-hitter on the line. He faced three pinch-hitters, one after the other.

Larry Brown batted for catcher Duke Sims. He hit the ball hard but lined out directly to Bressoud at shortstop. Lou Clinton, pinch-hitting for Tiant, lined out to center field.

Vic Davalillo pinch-hit for Howser. “Birdie Tebbetts, the Cleveland manager, was trying to disrupt me,” Morehead said. “I threw two fastballs for strikes. Davalillo went and ran to the dugout. I don’t know if Birdie called him back. I just stood there. I wouldn’t look at Bob Tillman, my catcher.”6

Morehead threw the third pitch, his curveball, down in the dirt. Davalillo—“probably the fastest runner in the American League between home and first”7—grounded the ball back to Morehead, who threw to Thomas for the final out.

Morehead clinched the no-hitter on an exceptionally close play, with several opportunities for things to go wrong. The Boston Herald described it thus: “Vic hammered it back on a bounce slightly to the first-base side of the mound. Morehead moved quickly but the ball bounced out of his glove and back toward the rubber. He recovered it, then flipped it casually toward first. The ball bounced in front of Lee Thomas as the speedy Davalillo streaked for the bag but Lee scooped it up as umpire Al Salerno waved the runner out.”8

Dave Morehead had his no-hitter. Regarding the final play, he told reporters, “I may have tripped or something. I don’t know now. I was too excited. Maybe I lost sight of it.”9

Tiant had pitched an excellent game, but Morehead had pitched a better one. He struck out eight (three on called strikes) and saw only five balls hit to the outfield.

It hadn’t been that long since the previous no-hitter at Fenway. A little more than three years earlier, Earl Wilson had thrown one on June 26, 1962. Bob Tillman was the catcher on that one, too. It was a long time until the next one—nearly 37 years. Derek Lowe no-hit Tampa Bay, 10-0, on April 27, 2002.10

The no-hitter turned out to be the peak of Morehead’s major-league career. He injured his shoulder early in the 1966 season and never again had a regular role as a starting pitcher. He retired after the 1970 season with a 40-64 record and 4.15 ERA in 177 games with the Red Sox and Kansas City Royals.

This game was fact-checked by Bruce Slutsky and copy-edited by Len Levin.

1 One of those in attendance was the author of this article. Morehead biographer Andrew Blume reports that there were another 1,123 present on passes. (With so many empty seats, the Red Sox were very liberal with passes to clergy and others.) It was the smallest crowd all year. Of the spectators, 104 were there on Ladies Day passes. There was plenty of room to move around and switch seats.

2 The very next day, Conigliaro hit two more homers, against Kansas City. At season’s end, he had 32 homers and led the American League.

3 It was not a close call that plate umpire Ed Runge would worry about later; it was “at least a foot outside home plate.” Larry Claflin, “Higgins Fired, O’Connell GM; No-Hitter by Sox Morehead,” Boston Record-American, September 17, 1965: 78. As the headline indicates, earlier in day Red Sox owner Tom Yawkey had fired general manager Mike Higgins and replaced him with Dick O’Connell.

4 Some may have changed seats and this author was tempted to move down to a box seat. He was seated in a reserved grandstand seat way out in Section 8, as best he can recall. It was far from a choice seat, but he’d read of the superstitions regarding jinxes and decided to stay put. The Boston Globe confirmed that in the dugout Red Sox players uttered not a word about the no-hitter in progress. Roger Birtwell, “Morehead Fires No-Hitter,” Boston Globe, September 17, 1965: 42.

6 Morehead added, “While Davalillo was doing that, Tillman came out and Eddie Bressoud came in. I said, ‘It’s 0 and 2, what should I throw him?’ They said, ‘You’re calling the pitch, not us.’ I said, ‘Okay, I’m going to throw him a curveball down. I’ll try to keep on top of it.” Peter Golenbock, Red Sox Nation (Chicago: Triumph Books, 1992), 282.

8 Henry McKenna, “Morehead Pitches No-Hitter,” Boston Herald, September 17, 1965: 37. Morehead told the story to Peter Golenbock: “I went to catch it, and I was going to run over to first the way Mel Parnell did in his no-hitter, either step on the bag myself or hand it to the first baseman so I wouldn’t take the chance of throwing it away. In my haste, the ball hit the heel of my glove and I started to run without the ball. The ball lay on the mound. I went back to pick it up and threw it to first base real quick. The throw was low in the dirt, and Mad Dog Lee Thomas scooped it out. I had my no-no.”

9 McKenna, 37. Tebbetts explained why he called Davalillo back. “I saw [Don] Larsen’s perfect game, and I didn’t want to see a called third strike today. I wanted the kid to earn it the hard way and he did. He deserved it. I didn’t want him to go into the dressing room and think he had been given it.” McKenna, 38.

10 The author was not tempted to change seats for that one. He was in the front row of the upper box seats in Section 17. The only other Red Sox no-hitter in the interim was on the road, thrown by Hideo Nomo in 2001.