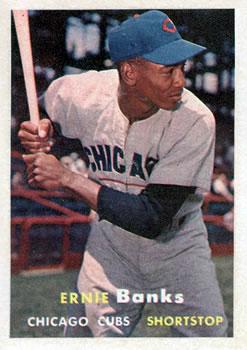 Twenty-four-year-old Ernie Banks exploded on the national baseball scene with the Chicago Cubs in 1955, his second full major-league season. Not only did his 44 home runs shatter the single-season record for homers by a shortstop, but his five grand slams set a new major-league record.1

A lighter 31-ounce bat that added as much as 25 MPH to his swing was a key factor in Banks’ record-setting performance in 1955.2 His first grand slam that year came on May 11 off Russ Meyer of the Brooklyn Dodgers in a 10-8 victory at Wrigley Field. Lew Burdette of the Milwaukee Braves was the next victim, on May 29 in a 9-6 win at Wrigley Field. Banks’ third round-tripper with the bases loaded was hit off Ron Negray of the Philadelphia Phillies on July 17 in a 12-11 loss at Connie Mack Stadium.

Banks tied the record on August 2, against the Pittsburgh Pirates at Wrigley Field. His blast off Dick Littlefield with Bob Rush, Dee Fondy, and Gene Baker on base was part of a six-run uprising in the fifth inning that propelled the Cubs to a 12-4 victory. “The wonder isn’t that he hit four [grand slams],” one fan said after Banks’ record-tying accomplishment, “but that the rest of the team succeeded in filling the bases that often.”3

Two days later, Banks went 4-for-5 at the plate, hit three home runs, and drove in seven runs in the Cubs’ 11-10 win over the Pirates. With 36 home runs at that point, he was only one game behind Babe Ruth’s record home run pace in 1927.4 Banks broke the single-season record for home runs by a shortstop on September 2 when his 40th homer, a blast off Paul LaPalme of the Cardinals, landed on the left-field bleacher runway at Wrigley Field. Vern Stephens of the Boston Red Sox had established the old record of 39 in 1949.

Banks hit three more home runs, giving him 43 for the season, before the Cubs visited the St. Louis Cardinals at Sportsman’s Park on September 19. The Monday night game opened a three-game series in the season’s final week. Chicago entered in sixth place in the eight-team National League with a 70-78 record. The Cubs did not fall out of the first division that year until they lost 15 of 16 games in late July after the All-Star Game. The Cardinals, at 64-84, were in seventh place.

Manager Stan Hack’s Cubs jumped out to a 1-0 lead in the first inning on Baker’s run-scoring single, driving in Fondy from second. Baker and Banks had formed the first Black double-play combination in the majors in September 1953, when the former was brought up from Los Angeles of the Triple-A Pacific Coast League and the latter was purchased from the Kansas City Monarchs in the Negro Leagues.

The game settled into a pitchers’ duel after Chicago’s early salvo. Left-hander Paul Minner of the Cubs and 19-year-old bonus baby Lindy McDaniel of the Cardinals, making his first major-league start and third career appearance, traded scoreless innings through the bottom of the sixth.

The Cubs moved to break the game open against McDaniel in the seventh. With one out, consecutive singles by Fondy, Baker, and Gale Wade loaded the bases.

“My first game for the Cardinals as a starting pitcher was against the Chicago Cubs in September 1955. I held the Cubs scoreless through the first four [sic] innings”—actually five innings after the Cubs scored in the first— but in the top of the fifth [sic, actually the seventh] they had loaded the bases with Ernie Banks stepping up to the plate,” McDaniel recalled.

“No one had bothered to tell me not to throw him a fastball on the inside corner of the plate, which he immediately drilled for a home run into the leftfield bleachers.”5

It was Banks’ fifth grand slam of the season, a new major-league record. The Cubs led, 5-0.

Unfortunately for Banks and his teammates, this turned out to be their high point. The Cardinals began to rally with two two-out runs in the bottom of the seventh on run-scoring singles by Alex Grammas and rookie Ken Boyer.

In the eighth inning, Manager Harry Walker’s team tied the score at 5-5 on Harry Elliott’s three-run bomb, which scored Stan Musial and Rip Repulski and sent Minner to the showers.

The score remained tied until Repulski batted against Jim Davis, Chicago’s third pitcher, with two outs in the bottom of the 12th inning. With two strikes, home-plate umpire Lon Warneke ruled that Repulski had fouled off a pitch.

After the game, Hack disputed the umpire’s call. “Repulski struck out. He didn’t foul the ball,” Hack told the St. Louis Post-Dispatch. “It should have been three strikes.”6

But Repulski’s at-bat continued, and he homered to center to give the Cardinals a 6-5 win.

Sportswriter Jack Rice observed that the Cubs’ loss put a damper on Banks’ achievement. “Their man Ernie Banks was entitled to do a headstand, or look in a mirror and grin happily at himself,” Rice wrote. “He had to save it.”7 Banks biographer Ron Rapoport had a slightly different view 64 years later—that lost in the celebration of Banks’ fifth grand slam was the fact that the Cubs lost, 6-5, in 12 innings.8

At the end of the season, Chicago sportswriter Edgar Munzel wrote that Banks “distinguished himself with the greatest all-around season ever enjoyed by a shortstop in the history of the game.”9 His 44 home runs, 117 RBIs, and .295 batting average put him in National League MVP discussions with Henry Aaron of the Braves, Del Ennis of the Phillies, Ted Kluszewski of the Reds, Willie Mays of the Giants, and Roy Campanella and Duke Snider of the Dodgers.10 Campanella ended up winning his third NL MVP Award in five years. Banks’ 44 homers in 1955 were more than all the other American League shortstops combined and only one fewer than the seven other NL shortstops.11

Banks had turned down a chance to have a day for him at Wrigley Field on September 18, the Cubs’ final home game of the 1955 season. “I’ve been playing for the Cubs only two years,” he said. “I don’t want a ‘day’ until I have proved myself. I just don’t think I deserve one yet.”12 He did receive a 122 percent pay raise for 1956; his salary increased from $9,000 in 1955 to $20,000 the next season.13 “The elevation of Ernie Banks from the Negro League to one of the elite players in the game in a little more than two years, without any training in the minor leagues, was stunning,” author Doug Wilson wrote.14

Banks hit 12 grand slams during his 19-year Hall of Fame career with the Cubs—nine at Wrigley Field and three on the road. After finishing third in the MVP voting in 1955, he won the award in 1958 and 1959. He was elected to the Hall of Fame in 1977 and received the Presidential Medal of Freedom from President Barack Obama in 2013.

In addition to the sources listed in the Notes, the author used Baseball-Reference.com, PaperofRecord.com, Newspapers.com, and Retrosheet.org.

16 On September 30, 1987, Mattingly hit his sixth grand slam of the season off Boston’s Bruce Hurst in the third inning of the Yankees’ 6-0 victory. Mattingly had not hit a grand slam in his first four seasons of major-league baseball. Dan Hafner, “Baseball Roundup: Mattingly Sets Record With 6th Grand Slam,” Los Angeles Times, September 30, 1987: 46. Travis Hafner’s sixth came off Kansas City’s Luke Hudson in the first inning of a 13-0 victory on August 13, 2006.