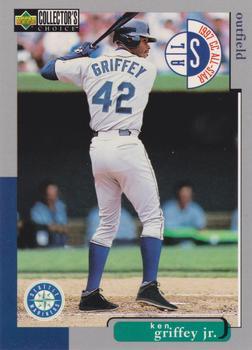 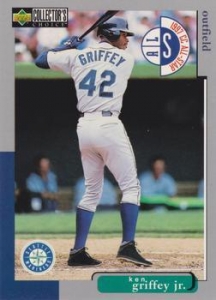 April 15, 1997, was the 50th anniversary of one of the most impactful events in baseball history: Jackie Robinson breaking major-league baseball’s color barrier in his debut with the Brooklyn Dodgers.

The major leagues marked the occasion with commemorative celebrations across the country. The central event was a ceremony at Shea Stadium before the New York Mets-Los Angeles Dodgers game, attended by President Bill Clinton, Jackie’s widow, Rachel Robinson, and acting Commissioner Bud Selig. During the ceremony Selig declared, “In honor of Jackie, Major League Baseball is taking the unprecedented step of retiring his uniform number in perpetuity. Number 42 from this day forward will never again be issued by a major-league club. Number 42 belongs to Jackie Robinson for the ages.”1

Other tributes occurred in cities around the league. In Cleveland, Ken Griffey Jr. of the Seattle Mariners wore uniform number 42, the reverse of his normal jersey number, in Seattle’s game against the Cleveland Indians. He even wore black sanitary socks pulled up to his knees, as Robinson had customarily done.

On the field that night, Griffey Jr. honored Robinson with his play, driving in a run and scoring another to give the Mariners an early lead, then sparking Seattle’s game-winning eighth-inning rally with a leadoff walk as the Mariners rolled to an 8-4 win over the Indians.

The idea for Griffey Jr. to wear 42 originated with the Robinson family. Griffey said, “Actually, the Robinson organization asked me to wear it all year. My dad said on the 15th, I should wear it, that it’s a number that is something special. This is his day. [Robinson] worked hard for each and every one of us in this locker room.”2

Other players expressed similar sentiments about Robinson and his impact on the game. Indians center fielder Marquis Grissom said, “Jackie Robinson, being the first, it’s just an honor to even think about it. But I think people are missing the whole thing—he spoke for everybody, not only for black people.”3

Griffey Jr.’s tribute to Robinson came in a rematch of the 1995 American League Championship Series, which the Indians won in six games. Cleveland had repeated as AL Central champions in 1996, while the Mariners finished second in the AL West, 4½ games behind the Texas Rangers. Expectations were high for both teams going into the 1997 season.

There had been significant turnover in Cleveland’s starting lineup from 1996, including the loss of key players Albert Belle, Eddie Murray, Kenny Lofton, Julio Franco, and Carlos Baerga. The Indians had restocked for 1997 with the offseason addition of Matt Williams, David Justice, Marquis Grissom, and Tony Fernandez. Their starting pitching staff included four returnees from 1996, led by Orel Hershiser.

Seattle had a potent lineup of its own, headlined by returnees Griffey Jr., Edgar Martinez, Alex Rodriguez, Jay Buhner, and Paul Sorrento. The Mariners went on to lead the AL in home runs. Four-time strikeout leader and 1995 AL Cy Young Award winner Randy Johnson returned after missing most of the 1996 season following back surgery.

A crowd of 40,118 turned out for the night game at Jacobs Field, the second game of a two-game series. Hershiser and Seattle’s Bob Wolcott were the starting pitchers. Hershiser had a poor outing against the Mariners on April 8, when he gave up eight runs on 10 hits in 3⅔ innings.

Jim Thome put the Indians on the scoreboard with a solo home run in the bottom of the first. Seattle appeared to have a good chance to answer in the second, loading the bases on a walk and two singles with one out. But Hershiser escaped the inning without giving up a run.

In the top of the third, Hershiser ran into problems again when Lee Tinsley singled and went to third on a wild pitch and a single by Rodriguez. This time the Mariners scored on Griffey Jr.’s single. Then Hershiser walked Martinez and Sorrento smashed a double, his first of five hits in the game, scoring Griffey Jr. for a 2-1 lead.

The Indians countered with two runs in the bottom of the inning. A single and stolen base by Omar Vizquel, followed by Grissom’s single, put runners on first and third. Thome doubled to center field, scoring two runs, but he was thrown out trying to stretch it into a triple. The Indians held the lead, 3-2.

Hershiser and Wolcott settled in for the next 3½ innings; neither gave up a run. Wolcott’s only threat was a triple by Vizquel in the fifth. Sorrento got his third straight hit off Hershiser in the sixth.

After yielding a walk to lead off the seventh, Wolcott was relieved by Bob Wells, who held the Indians scoreless.

With Cleveland still leading by a run, veteran lefty Paul Assenmacher took over for Hershiser in the top of the eighth, but manager Mike Hargrove pulled him after a leadoff walk to Griffey Jr. Mike Jackson relieved and issued a one-out walk to Buhner to put two runners on for Sorrento.

Sorrento ripped Jackson’s pitch over Grissom’s head in center for a double, driving in Griffey Jr. and Buhner to put Seattle ahead, 4-3. Another double, by Brent Gates, scored Sorrento, and Seattle led by two.

Hargrove made his third pitching change of the inning by replacing Jackson with Paul Shuey. Shuey didn’t fare any better, giving up RBI singles to Dan Wilson and Rodriguez, and the Mariners had a 7-3 lead.

In the bottom of the eighth, Sandy Alomar Jr. got a run back for Cleveland with a solo home run off Wells. It was his sixth in 10 games. Sorrento added to his perfect night at the plate with an RBI single in the ninth for the final score, 8-4.

First baseman Sorrento, who had hit 75 home runs for Cleveland between 1992 and 1995, was the hitting star of the game. His five hits included two doubles, and he had four RBIs. It was the only five-hit game of his 11-year career. Piniella said after the game, “Sorrento was the story of the game. Five hits are a lot of production.”4 Griffey Jr., Alex Rodriguez, and Gates each chipped in two hits.

Cleveland and Seattle wound up delivering on the preseason expectations, both winning their divisions. Cleveland captured the pennant over the Baltimore Orioles but was defeated by the wild-card Florida Marlins in a seven-game World Series.

Ten years later, Griffey Jr., then with Cincinnati, asked the commissioner’s office to let him wear number 42 again on the 60th anniversary of Robinson’s debut game. Selig responded by inviting other players to also wear the celebrated number. More than 200 major-league players, managers, and coaches wore the number on games played on April 15, 2007. At the time, only Mariano Rivera still wore the number in the majors.5 He retired after the 2013 season.

Now, when Jackie Robinson Day is celebrated each year, every major-league player, manager, and coach wears number 42.6 When ballparks display the uniform numbers of retired players from their home team, Robinson’s 42 is included.

1 Bob Nightengale, “Here’s to You, Jackie: No. 42 Retired,” Los Angeles Times, April 16, 1997: C6. Among the active players still wearing the number were Mo Vaughn, Butch Huskey, Tom Goodwin, Buddy Groom, Marc Sagmoen, and Mariano Rivera. They were allowed to wear the legendary number for the remainder of their careers.