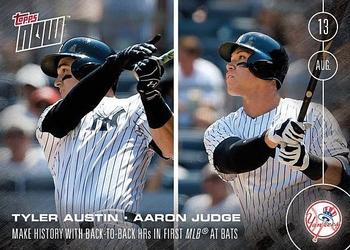 It was a “boiling” hot Saturday afternoon in Yankee Stadium, according to Yankees radio play-by-play announcer John Sterling,1 with a game-time temperature of 95 degrees. Little did the 41,682 fans know that two young prospects, Tyler Austin and Aaron Judge, would make their Yankees debut in spectacular fashion that day. New York entered the game at a disappointing 59-56 in fourth place in the American League East, but well ahead of Tampa Bay, fifth at 46-68.

This was the day after Alex Rodriguez played his final game for the Yankees and a day of a 20th-anniversary celebration and reunion of players from the 1996 championship team.2

At 1:29 P.M.3 the Rays’ Logan Forsythe stood in the batter’s box, ready for Masahiro Tanaka’s first pitch. Forsythe grounded out as Tanaka breezed through a 1-2-3 inning. Matt Andriese, the Rays starter who came in with a 6-3 record, yielded a one-out single to Yankees left fielder Aaron Hicks but retired the next two batters.

Austin, 24, came up with two outs in the bottom of the second. In 57 games season at Triple-A Scranton/Wilkes-Barre, the right-hand-batting Austin hit.323. His 65 hits included 13 home runs.4 With Greg Bird undergoing shoulder surgery and out for the season, it made sense for the Yankees to call up the first baseman.

Andriese dealt a predictable sequence to Austin: a fastball, a changeup, another fastball, and another changeup. Austin swung early at the second changeup, barely managing to tip it back behind home plate. On the sixth pitch, Austin must have guessed that Andriese would come back with a fastball. As Austin expected, Andriese threw a hard one low and away. Austin drilled it down the right-field line.5 Rays right fielder Mikie Mahtook sprinted after it but ran out of room. The ball bounced off the first row of right-field seats and came back onto the field. This made it easy for Tony Peña, the Yankees’ first-base coach, to retrieve the ball for Austin.

The 6-foot-7 Judge, also 24, had been called up to replace the veteran Brett Gardner, who was hit by a mid-90s fastball from the Rays Chris Archer the day before. The young slugger, playing right field, followed Austin in the order, batting eighth.

Andriese started Judge with a fastball for a called strike. On the next pitch, Judge was out in front of a looping curve, which he tapped foul down toward third base. Judge was down 0-and-2, and his initial at-bat didn’t look promising. Andriese’s next pitch was a changeup low for a ball. Hoping to fool Judge, Andriese came back with another changeup, which Judge was able to square up perfectly. The ball, booming off his bat, traveled deep to dead center into the hallowed spot in Yankee Stadium known as Monument Park. The blast extended the Yankees lead to 2-0.

No two players on the same team ever had hit home runs in their first major-league at-bats in the same game – let alone the same inning or back-to-back.6

In the top of the fourth inning, after five pitches, Tanaka found himself with runners on first and third with left-handed-batting first baseman Brad Miller, the cleanup hitter, at the plate. On a 2-and-0 count, Tanaka threw a slider on the outside part of the plate. Miller drilled it to left field for a home run, and the Rays led 3-2.

The Yankees answered with one out in the bottom of the fourth. On a mid-80s slider, second baseman Starlin Castro homered to center field to tie the game, 3-3.

A three-run homer by Hicks off Andriese in the fifth put the Yankees up for good, 6-3. Didi Gregorius sealed the game for the Yankees in the seventh with a two-run homer off Rays reliever Erasmo Ramirez. That homer followed the game’s only walk, to Chase Headley.

All the Rays could muster was Miller’s second homer of the game off Tanaka, which came in the top of the seventh with the bases empty. Three relievers pitched the eighth and ninth for New York. The final score was 8-4 with Tanaka winning his ninth game against four losses.

Both Austin and Judge ended the day 2-for-4. Judge scored a second run ahead of the Hicks homer. Austin stole a base. The five homers hit by the Yankees matched a season high. All five were hit by players 26 or younger.

For Austin, the home run was one of five he hit for the Yankees in 2016. He was up and down between New York and the minors into 2018, when the Yankees traded him to Minnesota. For Judge, the rest of the 2016 season went downhill. Although he finished with four home runs, he hit just .179. Still a rookie after 27 games, Judge had a breakout season in 2017 with a then-record 52 home runs and the AL Rookie-of-the-Year Award.