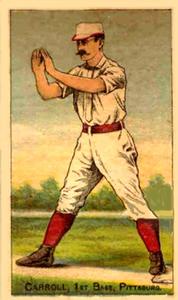 Teammate Fred Carroll, whose defensive versatility enabled him to play in 102 contests in 1887, did not participate in the Alleghenys’ first game. Carroll, however, made up for it with a four-hit performance in the next game, also played in Pittsburgh, but against the Detroit Wolverines on May 2.

It was the season debut for the 22-year-old Carroll, a reserve outfielder and part-time catcher. His first four hits of the 1887 season resulted in a rare event, as he hit for the cycle against the Wolverines. Furthermore, those hits came in his first four at-bats of the year, and they were in ascending order, as he “knocked down a single, a double, a triple and a home run in four consecutive times at the bat.”1 This was the first time in baseball history2 that a batter had hit for the cycle in his first four at-bats of his very first game of the season.

Future Hall of Fame pitcher Pud Galvin started for the home team. The Alleghenys had jumped from the American Association in 1886 (where they had a second-place finish) to the NL in 1887. As the ace of the Pittsburgh pitching staff, Galvin had defeated the White Stockings on Opening Day. The right-hander shared rotation duties with Jim McCormick and Ed Morris.3 When Morris couldn’t pitch since “his shoulder was in bad shape,”4 manager Horace Phillips gave Galvin the nod against Detroit.

The Wolverines had swept the Indianapolis Hoosiers to begin their season, outscoring them 29-23 in the three-game series. Detroit had finished second in the NL in 1886, but the Pittsburgh Daily Post reported that they had put together a 30-game winning streak, dating back to the previous season.5 This led Wolverines manager Bill Watkins to remark, “We are sure of three straight victories here,”6 much to the dismay of the Pittsburgh crowd. The ace of the Wolverines squad was Pretzels Getzien, but this game was started by left-hander Lady Baldwin. (Getzein did “the twirling”7 the next day.)

The Detroit Free Press reported that “in the neighborhood of 5,000 people”8 attended the late afternoon game at Pittsburgh’s Recreation Park. The official start time was 4:15 P.M.

Despite their manager’s bold prediction, the Wolverines “were beaten in the first inning.”9 The Alleghenys batted first. With two outs, Carroll “hit a fast one”10 that got by Detroit third baseman Deacon White for a single. Sam Barkley singled to right, sending Carroll to third. John Coleman then singled to center. Carroll scored easily and Barkley turned for home when the relay throw from the outfield was dropped. Barkley was safe and Coleman took second on the play.

McKinnon’s single up the middle brought Coleman home. Art Whitney drew a walk, and then Pop Smith hit an RBI single. Galvin struck out to end the inning, but the Alleghenys had batted around and scored four times.

Pittsburgh added a run in third, when McKinnon walked and scored on Whitney’s RBI double for a 5-0 lead. Detroit “had a slight chance of making a run”11 in their half of the inning. Baldwin led off with a single. Two outs later, Dan Brouthers scorched a liner to center “that would have penetrated a brick wall.”12 Center fielder Tom Brown’s attempt to catch it resulted in a split finger as he dropped the ball, but he picked up the ball and threw to the catcher Carroll, who tagged out Baldwin at home. Brown had to leave the game, so in the next inning, Carroll moved to center and Doggie Miller replaced him behind the plate.

In the bottom of the fourth, Sam Thompson singled and moved into scoring position on White’s groundout (although most sources, including the Detroit Free Press,13 claim White was safe). Ned Hanlon’s single plated Thompson for Detroit’s first run. Two more Wolverine tallies came in the fifth. With two outs, Jack Rowe doubled. Brouthers reached on second baseman Barkley’s error. (He “fell over”14 picking up Brouthers’ grounder.) Both runners scored on Thompson’s triple, which cut the deficit to 5-3. That was all the Wolverines managed for the afternoon, as Galvin retired the rest of the Detroit batters, finishing the game by setting down 13 straight batters.

By then Pittsburgh’s offense had rebuilt a comfortable lead. In the sixth, Galvin lifted a fly ball to left that Jim Manning “misjudged and then muffed.”15 Baldwin retired the next two batters and seemed to be out of the inning, when Carroll, “having already made three hits,”16 came to the plate.

Carroll had doubled in his second at-bat and tripled in his third appearance in the batter’s box, although neither of those hits led to a run. Now, he hit a pop fly into foul territory that catcher Charlie Ganzel dropped, giving Carroll new life.

Carroll swung at the next pitch and “landed the ball over the left field fence”17 for a two-run home run. At this point, “hats were thrown into the air and men and women cheered wildly.”18 With the home run, Carroll had completed a natural cycle, recording the single, double, triple, and home run in that order.

Back-to-back doubles by Coleman and McKinnon in the seventh inning produced Pittsburgh’s final run in its 8-3 win. McKinnon had three hits, giving him seven hits in the Alleghenys’ first two games.19

Although the Wolverines did lose this game, ending their famous streak, they rebounded the next day, defeating Pittsburgh 14-5, and starting a streak of 16 wins in their next 17 games (consisting of two eight-game winning streaks), to pull away from the rest of the league. Watkins’ pre-series prediction had some merit to it. The Wolverines (79-45-3) won the 1887 pennant, edging the Philadelphia Phillies by 3½ games. Meanwhile, Pittsburgh posted losing records in May, June, July, and September and finished their inaugural season in the National League in sixth place, with a record of 55-69-1.

In 1887 Carroll had arguably the best offensive season of his eight-year major-league career, hitting .328 with a career-high 6 homers and 15 triples.20 His 24 doubles and 138 total hits ranked second in his career (to his 1886 stats). Three of his 45 extra-base hits took place in this game.

In hitting for the cycle, Carroll joined the Philadelphia Athletics’ Lon Knight (July 30, 1883, against the Pittsburgh Alleghenys) and the Louisville Colonels’ Pete Browning (August 8, 1886, against the New York Metropolitans) in completing a natural cycle to that date.21 While both Knight and Browning played in the American Association when they hit for the cycle, Carroll’s accomplishment took place in a National League game. Since Carroll’s feat, 14 more major leaguers have hit for a natural cycle.22 Carroll is also the first batter in the Pittsburgh Pirates franchise history to hit for any cycle.23

2 On April 20, 1937, Detroit’s Gee Walker hit for a reverse natural cycle (home run, triple, double, then single) on Opening Day, in his only four at-bats of the game. Walker’s achievement remains the only time a batter has hit for the cycle in both his first four-at-bats and in his team’s first game of the season. On April 16, 1972, San Francisco Giants third baseman Dave Kingman hit for the cycle with his first four hits of the year. However, in Kingman’s case, he had gone 0-for-4 in the season opener, on April 15.

13 “How It Happened.” According to the Detroit Free Press, the call was a “palpably bad decision by [Umpire Joe] Quest.”

19 McKinnon batted .340 for the season, although he appeared in only 48 games.

21 Of the 17 known natural cycles as of the end of the 2021 season, Knight’s and Browning’s were the only ones during the American Association’s tenure as a major league, which lasted from 1892 through 1891.

22 After Knight (AA), Browning (AA), and Carroll (NL), the batters who have hit for a natural cycle are: