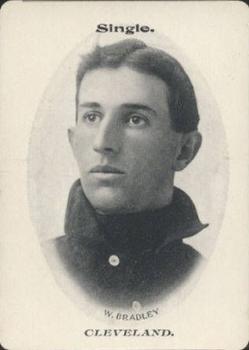 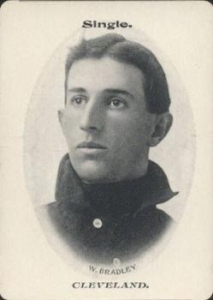 The Boston Americans ran away with the American League pennant in 1903, finishing the season by winning the first World Series between AL and National League champions. The Cleveland Naps spent much of the season in the middle of the AL standings, but a stretch of 13 wins in 14 games in August enabled them to climb into second place. On September 24, with just five games left in the regular season, the Naps played the Washington Senators, while still clinging to a one-game advantage over the third-place Philadelphia Athletics.

The Naps ensured another day in second by “chalk[ing] up a run for nearly every hit”1 as they thrashed the Senators, 12-2, before an American League Park crowd of 1,151, with “the cold weather [keeping] down the attendance.”2 The Naps pounded out 14 hits, 10 of them for extra bases. Four of those long hits came off the bat of Bill Bradley, who hit for the first cycle in Cleveland franchise history.3

Bradley, who had jumped from the National League’s Chicago Orphans to join Cleveland for the AL’s inaugural season in 1901, was “one of the junior circuit’s most feared hitters” at age 25.4 In 1902 he had homered in four consecutive games (in each game of a four-game series against the Philadelphia Athletics), becoming the first player to do so. He batted .340 in 1902 and entered this game against the Senators with a .305 mark. In addition, on July 28 Bradley had tied the major-league record with three triples in a game.

Righthander Al Orth pitched for the Senators. He had yielded 18 home runs and 62 doubles to opposing batters in 1902, both worst in the AL. This was his last appearance of the 1903 season, and he had lost five of his last six decisions. Orth held the Naps in relative check through the first five innings, but “after that it was a merry-go-round,”5 and he allowed 10 runs in the next three frames.

Fellow righty Red Donahue was given the mound duties for Cleveland. He had started the season with the St. Louis Browns but was traded to the Naps on August 1 for pitcher Gene Wright.6 This was his 10th season in the majors, and he had beaten the Senators in his only other start against them for the Naps. Despite allowing 12 hits, Donahue “was fortunate in getting the third man out [in each inning] before any great damage could be done.”7

Cleveland’s Bradley “got into his stride early.”8 With two outs in the top of the first, he “cut open the first by dropping the ball over the fence”9 for his sixth home run of the season.

Back-to-back triples by Harry Bay and Bradley brought in Cleveland’s second run in the third inning. In their turn, the Senators loaded the bases on three singles but could not score, so the score remained 2-0.

In the bottom of the fourth, Washington’s Bill Coughlin singled and scored when Barry McCormick doubled to center. McCormick tried to stretch his hit into a triple, but a perfect relay from center fielder Jack Thoney to second baseman Nap Lajoie to Bradley at third resulted in McCormick being tagged out.

According to the Washington Evening Star, “In the sixth came the deluge.”10 Cleveland attacked Orth’s “curveless and speedless delivery”11 for four more runs, surging to a 6-1 lead. Bradley lined a double into center and scored on Lajoie’s single. Harry Bemis hit a dribbler in front of home plate and Washington catcher Malachi Kittridge threw him out as Lajoie advanced to second. Thoney’s double scored Lajoie, and Fred Abbott “fell against the ball for three bases,”12 pushing Thoney over the plate. A passed ball by Kittridge allowed Abbott to score the fourth run of the inning.

After the Senators went scoreless in their half of the sixth, Elmer Flick led off the top of the seventh with a single. He moved up a base on Bay’s sacrifice. Bradley “rattled out another two-base hit,”13 plating Flick. It was Bradley’s fourth hit and second double of the game.

That brought up Lajoie, who sent a high fly ball to center that rookie Rabbit Robinson could not reach; one account said that the fly ball “was lost in the sun.”14 Bradley scored Cleveland’s eighth run of the game on the double. Bemis followed with a single, driving in Lajoie. Cleveland now led, 9-1.

In the bottom of the seventh, Coughlin again singled to try to start a rally. Second baseman McCormick shot the ball right at Donahue on the mound. The ball struck the pitcher’s hand and then caromed toward second base. Cleveland shortstop John Gochnaur scooped up the ball, stepped on second base, and fired to first for the double play.

The Senators did get a run out of the inning, after Kittridge singled with the bases empty and Orth got the best hit of the day for Washington. His triple drove home Kittridge for Washington’s second (and final) run of the game.

In the eighth, the Naps “were again busy with their bats.”15 Gochnaur16 walked. Two outs later, Bay also walked, and Bradley beat out an infield single to load the bases. With his fifth hit, he had hit for the cycle. Lajoie then “sent a terrific bolt toward McCormick”17 that rolled to the fence. All three baserunners touched home plate on Lajoie’s double.

The visitors “expired in order in the ninth.”18 Donahue earned his victory and Orth was tagged with his 22nd loss of the season. According to the Washington Post, “the harder Orth was hit, the more he smiled.”19

With his 5-for-5 performance, Bradley scored four times and drove in three runs, accumulating 12 total bases. This broke his own franchise record of 10 total bases (set in the three-triple game on July 28).20 His batting average jumped to .312. He might have had a few more home runs, according to the Washington Post, “had not Manager [Tom] Loftus’ fence interfered.”21 Instead, Bradley had one homer, a triple, two doubles, and a single. It was the second time in the season that Bradley had garnered five hits; the first came against the Nats as well, on June 9, also at American League Park.22 In 1903 Bradley batted .511 (23-for-45) at American League Park and hit .422 (35-for-83) against Washington. According to the Cleveland Plain Dealer, Bradley “always look[ed] forward with great pleasure to his visits in Washington and this was one of his best days.”23

Cleveland captain Lajoie was “another terror with the paddle,”24 finishing the game a home run short of hitting for the cycle.25 In 1903, Lajoie’s .344 batting average and .518 slugging percentage led the American League. Between them in this game, Lajoie and Bradley scored six times and drove in eight runs.

Bradley became the third major-league player to hit for a reverse natural cycle, when a batter gets the four hits in the order of home run, triple, double, and single. In this regard, Bradley followed Henry Larkin (Philadelphia Athletics, June 16, 1885) and Bid McPhee (Cincinnati Red Stockings, August 10, 1887). Both Larkin and McPhee accomplished their cycles while playing in the American Association, making Bradley the first American League player known to hit for a reverse natural cycle. As of the end of the 2021 season, this permutation of the cycle has occurred 11 times.26 In addition, Bradley became the first player in Cleveland franchise history to hit for the cycle.

1 “Blues Punished Orth,” Washington Post, September 25, 1903: 8. Note how the newspaper still referred to the Cleveland team by its 1901 nickname, the Blues.

16 According to his SABR biography, shortstop Gochnaur was “sometimes cited as the worst player in major-league history.” See sabr.org/bioproj/person/john-gochnaur/. Accessed March 2022. He played only two full seasons in the majors (1902 and 1903, although he did appear in three games at the end of the 1901 season), and batted .185 in each campaign. His career slugging percentage was a frigid .240, and he gained further unwanted notoriety by leading the American League in 1903 with an astonishing 98 errors! This ranks 13th-worst all-time for the number of errors in a single season, and it is the highest number of errors by any shortstop since 1893. Gochnaur did not commit an error in this game against the Senators, but instead made four putouts and had four assists, including an assist in turning a double play.

20 Lew Fonseca broke Bradley’s record with 14 total bases on May 29, 1929. Bradley had been the third AL player to garner 12 total bases in a game.

25 Although he was only 3-for 5 in this game, Lajoie had hit for the cycle on July 30, 1901, against the Cleveland Blues (when he was playing for the Philadelphia Athletics). In that game, Lajoie went 4-for-5 with three runs scored and six runs batted in.