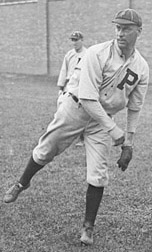 Built in 1913, the John T. Brush Stairway, a cast-iron staircase dedicated to the deceased owner of the New York Giants, led pennant-crazed fans down Coogan’s Bluff to ticket stands behind home plate, buying seats to the afternoon’s game between the Boston Braves and the New York Giants.1 The skies above on the first Sunday of September 1921 were cloudy with streaks of sun. Dampness from light winds coming off the Harlem River welcomed fans arriving to see their beloved Giants play. Prior to the first game of a four-game series with pennant implications, the

In a tight pennant race with Pittsburgh, the Giants had a potential second World Series title within their grasp.3 Twelve days days earlier, on August 23, the Giants were 7½ games behind the Pirates. But the team, managed by John McGraw, had been on a tear, winning nine of its last 10 games, and was now technically tied with Pittsburgh for first place at 79-51.4  The Giants had swept the first-place Pirates in a five-game series and the Cubs in a three-game series.

First-year manager Fred Mitchell had the Braves in the pennant race for the first half of the season but they had dropped off the pace, winning 4 of their last 16 outings and falling 9½ games out in fourth place at 68-59.5

For McGraw, the 1921 season represented a challenge for baseball dominance in New York with the ascension of the New York Yankees. Even though the Yankees were the Giants’ tenants at the Polo Grounds, they outdrew the Giants, epitomizing the new Lively Ball Era and relying on a lineup featuring Babe Ruth. McGraw’s teams embraced the Deadball Era philosophy of teamwork, speed, pitching, and defense.6

By midseason, McGraw saw the makings of a great Giants team but needed subtle enhancements. He found a willing partner in William F. Baker, the owner of the Philadelphia Phillies. On June 30 Baker traded Johnny Rawlings and Casey Stengel to the Giants. Rawlings, who stepped in at second base, was “expected to put an end to the worries of Manager McGraw in regard to his infield.”7 On July 25 McGraw acquired Phillies outfielder Emil “Irish” Meusel.8  These trades enabled McGraw to play Meusel in the outfield and Rawlings at second and move Frankie Frisch to third.9 The Giants began methodically whittling the Pirates’ first-place lead.

“I decided to trade Meusel because I needed other material for him and did not regard him as a great outfielder,” said Phillies’ owner Baker in his analysis of the Meusel trade.10 Criticized for the deal, Baker told the Brooklyn press that Meusel was a bad teammate, a sulker. Baker accepted the Giants’ package, taking “the best offer I could get for a man I did not want.”11

Giants starting pitcher Art Nehf was seeking his 18th win of the season. At 5-feet-9, Nehf was a left-handed control pitcher whose side-arm and submarine deliveries confused batters. The Giants acquired Nehf in 1919, trading with the Braves for Joe Oeschger.12 Coincidentally, the right-handed-tossing Oesgcher, who had developed into Boston’s ace, was on the rubber for the Braves, seeking his 20th win.13

Nehf dominated the Braves’ bats in the first three innings, inducing six infield outs among 10 batters, giving up only a second-inning line-drive double to right by Walter Barbare. It appeared that the Braves posed little threat to Nehf’s offerings; he was “in fine one style, during which Boston smote him for only one safety.”14

After giving up only a walk to Dave Bancroft in an uneventful first, Oeschger was tagged for a run in the second. George “High Pockets” Kelly led off with a double along the left-field foul line. Kelly took third “after Billy] Southworth pulled down Meusel’s long fly” to right.15 After Rawlings walked, Earl Smith drove Kelly home with a sacrifice fly to Southworth.

The Giants were on the cusp of a bigger rally when Nehf “poked a single to center,” advancing Rawlings to third.16 The “uprising came to an untimely end at this point” by Rawlings’ poor baserunning.17 With George Burns in the box, Nehf attempted to steal second. Catcher Hank Gowdy faked a throw to second and caught Rawlings wandering off third, getting him into a rundown in which he was tagged out.

The Giants “jammed another run across” in the third to make it 2-0.18 With one out, Bancroft singled into right, completing “the circuit on Frisch’s solid smash to right center for three bases.”19 The Giants, however, failed to advance the Fordham Flash home to pad their lead. The Braves soon rallied against Nehf.

“But the little left-hander got into a peck of trouble in the fourth,” as Nehf gave up three runs on four hits resulting in a brief Braves lead.20 With one out, Southworth hit a “bounder [that] was too high for Frisch” at third.21 Boeckel “slapped another high bounder” past Frisch as “the ball carried to the left field bleachers for a double.”22 Southworth scored and Boeckel took third on Barbare’s groundout to Kelly at first. Walter Holke singled to left to score Boeckel. Hod Ford delivered a pitch deep into the gap between center and right for a double, driving in Holke and giving the Braves a 3-2 lead.

The Giants tied the game at 3-3 in the bottom of the fourth with two outs when Smith “cracked out a homer” into the upper tier of the right-field stands.23 “There are home runs and home runs,” wrote William P. Hanna of the New York Herald of Smith’s clout.24 Smith’s homer was “the last gasp” of scoring for the Giants.25 After giving up three runs and five hits in the first four innings, Oeschger returned to expected dominance, shutting down the Giants for the duration of the game.

In the fifth, the Braves “resumed their assault on Nehf,” pounding the pitcher for three runs.26 Oeschger and Ray Powell “whacked clean singles.”27 Al Nixon laid down a bunt to advance the runners to second and third. Southworth took a Nehf curveball and “deposited a new white ball among the spectators in the upper deck” in right field for a three-run homer.28 Southworth’s seventh homer of the season “spoiled a perfectly good afternoon for the home fans” with all the needed runs to grab a victory.29

With the score at 6-3, Braves, Nehf “was led to the showers” by McGraw, who summoned Slim Sallee “to the rescue but the damage had already been done.”30 Sallee and Cecil “Red” Causey, “who recently returned to the Giants from his exile in Philadelphia,” held the Braves scoreless for the remaining four innings.31

Oeschger dominated the Giants for the next five innings, scattering three singles. No Giant visited second base after the fourth inning. The Giants attempted a rally in the eighth when Frisch led off by “beating out a splash in front of the plate,” but Ross Youngs and Kelly each hit force-out grounders and Meusel flied out to Southworth, ending the threat.32

In the bottom of the ninth, the durable Oeschger completed his efforts by retiring the Giants in order, culminating in Eddie Brown, pinch-hitting for Causey and popping out to Gowdy for the final out. In a complete-game performance, Oeschger won his 20th game against 11 losses, scattering eight hits. Nehf took his ninth loss.33

In a game played in a crisp 1:50, “the Braves came down from Boston yesterday and by sturdy use of their war clubs checked the Giants’ winning spurt.”34 The Braves momentarily halted the Giants’ drive to the NL pennant as “[T]he Braves went on quite a rampage.”35 After an unsettled beginning, Oeschger “pitched with the utmost effectiveness.”36 Nehf hurled “airtight ball [for] the first three innings[,]” then the Braves tagged him for six runs in the next two innings.37 Nehf came into the game pitching well but ultimately “failed to show the stuff with which he recently made monkeys” of the Pirates in his last start.38

Southworth’s “all around work was the high light of the battle,” according to the New York Times.39 He went 3-for-4 with six putouts in right field, three of which were off the bat of Meusel. Nehf ended the season with his second straight 20-game winning campaign.40 Oeschger, who finished the year at 20-14, experienced a career season in 1921. The following two seasons he declined to 11-36 and was out of the major leagues after 1925.41

The game was highlighted by two great defensive plays in the ninth. Bancroft made a “leaping one-hand catch of a blazing line drive” off Ford’s bat that was destined for right field.42 A few minutes later, Ford returned the favor with a “bare-handed stop of Smith’s sharp grounder and nailed him with a fast throw.”43

With the Pirates’ 12-inning 2-1 win over the Reds, the Giants fell one game out of first place. But the Giants overtook the Pirates to stay on September 9, winning the pennant by four games with a 94-59 record and beating their tenants, the Yankees, to win the World Series.44 Boston remained in fourth, slumping to 79-74, 15 games out of first place.  The Braves would not see an above-.500 winning season again until 1933.

In addition to the sources cited in the Notes, the author consulted Baseball-Reference.com, Retrosheet.org, and MLB.com.

1 John T. Brush was the principal owner of the New York Giants franchise from late in the 1902 season until his death after the 1912 season. The stairway still exists. The stairway and the Bushman Steps are all that remains of the Giants in New York and the Polo Grounds era. The National Football League’s New York Giants and Jets and the New York Yankees and Mets, and San Francisco Giants and Major League Baseball donated the necessary funds to repair the crumbling staircase in 2015. See: Lindsay Berra, “Renovated Steps Commemorate Polo Grounds, mlb.com, July 9, 2015, https://www.mlb.com/news/stairway-commemorates-ny-polo-grounds/c-135771510, accessed September 8, 2021.

2 Commonly referred to as Coogan’s Bluff, the Polo Grounds was actually built into Coogan’s Hollow, the bottomland between the bluff and the Harlem River.

3 The New York Giants’ 1921 World Series championship was the team’s first since they beat the Philadelphia Athletics in 1905.

5 Mitchell managed the Cubs from 1917 to 1920, leading the team to the 1918 National League pennant. He was fired as Cubs manager at the end of the 1920 season and immediately hired by the Braves. Mitchell’s prior success in Chicago did not follow him to Boston, where he lost 100 games in both 1922 and 1923. Mitchell was fired after the 1923 season.

6 For more on this topic, see Steve Steinberg and Lyle Spatz, “1921: The Yankees, the Giants, and the Battle for Baseball Supremacy in New York,” in Baseball Research Journal, Fall 2009 (Cleveland: Society for American Baseball Research, 2009). Access /journal/article/1921-the-yankees-the-giants-and-the-battle-for-baseball-supremacy-in-new-york/.

Goldie Rapp, Lee King, and Lance Richbourg to the Phillies.

8 “Irish Meusel Sent to Giants in Trade,” New York Times, July 26, 1921: Section S, 12; The Phillies received in exchange Curt Walker and Butch Henline plus $30,000; Meusel was of German/French descent but his bright red hair gave many the appearance he was an Irishman and hence the moniker, Irish.

9 It was initially Frisch at second and Rapp playing third. Rapp went to Philadelphia in the Rawlings trade, and Frisch moved to third with Rawlings taking second.

13 Oeschger was an engineering graduate from St. Mary’s College in Moraga, California. Nehf was a 1914 electrical engineer graduate from the Rose-Hulman Institute of Technology in Terre Haute, Indiana. The Robins and Braves played in the longest game in major-league baseball history on May 1, 1920. Leon Cadore was the Brooklyn Robins’ starting pitcher. The Braves starter was Oeschger. Each pitched the entire game before it was called for darkness tied at 1-1 after 26 innings of play.

33 Oeschger was the third National League pitcher in 1921 to achieve the 20-win mark, after Burleigh Grimes of the Brooklyn Dodgers and Wilbur Cooper of the Pittsburgh Pirates.

44 The Giants appeared in four consecutive World Series from 1921 through 1924, winning two championships.