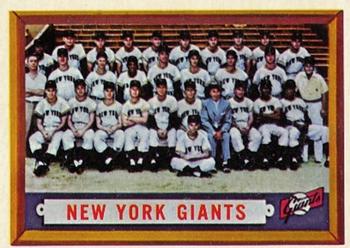 “I don’t know how you feel about it at the other end of these microphones, whether you are sitting at home, or driving a car, on the beach or anywhere, but I know sitting here watching the Giants and Dodgers apparently playing for the last time at the Polo Grounds, you want them to take their time … 2-0 pitch is low, ball three … you just feel like saying: ‘Now don’t run off the field so fast fellas, let’s take it easy, we just want to take one last lingering look at both of you.” – Vin Scully1

The players took batting practice and spoke to the press as usual. Today, however, was different, as was the conversation. The gathering around the batting cage was reminiscent with a touch of sadness. New York Times sportswriter Arthur Daley called it à la carte reminiscing.2 This was the last Brooklyn Dodgers vs. New York Giants game played before both teams moved west.

In the conversation, no Polo Grounds memory came back to life more quickly than “The Shot Heard ’Round the World,” Bobby Thomson’s home run giving the Giants the 1951 National League pennant.3 Baseball history tells us that the Brooklyn Bridegrooms won the American Association title in 1889 and played the New York Giants, winners of the National League, in a nine-game World Series, won six games to three by the Giants. Brooklyn joined the National League in 1890 and won the pennant. The intraleague rivalry was on, as captured in an essay by Burbridge and Harris in the 2017 issue of The National Pastime.4

When Roger Kahn wrote The Era 1947-1957 When the Yankees, the Giants, and the Dodgers Ruled the World, he agreed that the ending was sad, but thought that the time was right as the drama played out. “By the time the ballclubs moved West, the great Dodger team was waning. Pee Wee Reese, the immortal shortstop, had moved to third base. Jackie Robinson was working for a chain of lunch counters. The Giants had fired Leo Durocher.”5

Just one week earlier, the two teams played the last game of this rivalry at Ebbets Field, with the Giants winning, 7-5.6 The Giants erupted for five runs in the seventh inning against Johnny Podres and Don Bessent, but the highlight of the afternoon was surely Willie Mays’ 29th home run of the season. Mays was arguably now the best player on either team. Perhaps the 2⅓ innings of scoreless one-hit relief by 21-year-old Brooklyn-native Sandy Koufax was a sign of things to come for an aging Dodgers team.7

That 21-year-old Don Drysdale (14-8, 2.76 ERA) was starting for the Dodgers was fitting. The advice about pitching from veteran Sal Maglie over the past two seasons was helping shape Drysdale as a future stalwart among the Dodgers’ starting pitchers.8 California-born Drysdale well understood the significance of this day. Years later he wrote, “If you didn’t get up for that, you weren’t awake, and it’s been three decades since I experienced the Dodgers-Giants rivalry in New York, and I still haven’t seen anything vaguely resembling it – anywhere, anytime – in professional sports.”9

Curt Barclay (8-7, 3.17 ERA) started for the Giants. He had already made eight appearances against the Dodgers as a starter and reliever, but his last two starts against the Dodgers highlighted all the inconsistency expected from a rookie pitcher. Barclay pitched his first career shutout, a five-hitter, at Ebbets Field on August 6, but never made it out of the first inning at the Polo Grounds on August 15, a game the Giants eventually won 9-4.10

Barclay could have very easily suffered a similar first-inning fate in this game. With one out, Pee Wee Reese singled to center. It was fitting that Reese had the first hit of the game since he had played in the most Giants-Dodgers games of any player on either roster.11 When Duke Snider singled and Barclay walked Gil Hodges on a full count, the bases were loaded. This time, Barclay struck out Carl Furillo and induced Gino Cimoli to ground out to end the threat.

Barclay was fortunate for a time in the second inning. Charlie Neal opened the inning by reaching first on an error by shortstop Daryl Spencer, but was quickly erased when Rube Walker hit into a double play. But Barclay walked Drysdale and Jim Gilliam homered on the very next pitch, putting the Dodgers in the lead, 2-0.

Only Danny O’Connell was able to solve Drysdale’s pitching over the first three innings. O’Connell doubled to open the Giants’ first but didn’t advance farther than third base. He also walked with two outs in the third to no avail. But the Giants struck quickly in the fourth inning when Willie Mays singled to left and Ray Jablonski’s triple to right eluded Furillo, scoring Mays. Hank Sauer followed with his 25th home run of the season (274 for his career) and the Giants led 3-2.12 Drysdale did not allow another hit for his six innings of work. In fact, Barclay was the only Giant to reach base when Drysdale hit him with his first pitch in the fifth inning.

Barclay was equally as effective on the mound. When the Dodgers came to bat in the seventh inning, he had retired 10 consecutive batters. With one out, pinch-hitter Elmer Valo walked and Gilliam singled to right. It was time for Giants manager Bill Rigney to call on his save leader, 39-year-old Marv Grissom, to end the threat. He did that when Reese grounded into a double play and Grissom went on to earn his 12th save of the season, preserving Barclay’s ninth win.13 Perhaps there was some consolation for Dodgers fans that their team had won the season’s series from the Giants, 12-10.14

For the record books, it was also noteworthy when Willie Mays tripled in the eighth inning off Dodgers reliever Ed Roebuck. He joined Stan Musial as the only National League players to hit 20 triples since the New York Giants’ Bill Terry accomplished that feat in 1931.15

What about Vin Scully’s play-by-play broadcast of this last game played in less than two hours? In 2017 it was among 25 recordings selected for the National Recording Registry at the Library of Congress for its “cultural, artistic and historical importance to American society and the nation’s audio heritage.”16 As of 2020, the broadcasts of four baseball games, all involving the Dodgers, Giants, and/or the Yankees, and two other sporting events were so honored.17

Little was at stake in this last game and the Dodgers and the Giants were readying to move west, but Vin Scully wasn’t quite yet ready to leave New York: “Well, it’s funny, but being a kid raised in New York and you sit here watching this ballgame and looking at the Polo Grounds, and your memories go wild. Strike one pitch to Gino is down and low. Not just baseball, they had some great football games, and great stars who played here at the P.G. You can almost see them running around out there. … Did you ever see a Fordham-St. Mary’s football game, years ago before the war? That’s something you remember.”18

Scully’s play-by-play had weaved memories of the rivalry and the Polo Grounds into a play-by-play style that would continue to serve us all well for 67 seasons of Dodgers baseball (1950-2016).

As the 1957 season ended, inevitability became reality. For the first time in seven seasons neither team was going to the World Series.19 National League baseball and the Dodgers-vs.-Giants rivalry were leaving New York City and moving west. To some extent that void would eventually be filled when the New York Mets became an expansion franchise in 1962. After all, the Mets’ colors – blue and orange – were meant to represent the return of National League baseball to New York after the departure of the blue-clad Dodgers and the orange-decked Giants.20 In the meantime, there was another solution.

For three seasons beginning in 1958, sportscaster Les Keiter sat in a Manhattan radio studio re-creating San Francisco Giants baseball games for listeners to WINS radio in New York. Even Dodgers fans could listen to the old rivalry in a transcontinental setting. Keiter used ticker-tape reports, taped crowd noise, a drumstick and wooden block next to his microphone, and his knowledge of the game to deliver a credible play-by-play account.

Keiter remembered how “you use all this research and experience to create a broadcast that may not be correct in every detail but is certainly plausible.”21 He was easing us all into the next chapter in the baseball history books, the San Francisco Giants vs. the Los Angeles Dodgers.

The Games Project contributes to SABR’s research collection one game at a time. As of the posting of this essay, there are 17 contributions for Brooklyn Dodgers vs. New York Giants games during The Era and more to come. One essay reminds the author of his very first visit to the Polo Grounds with his father.22

The author accessed Baseball-Reference.com for box scores/play-by-play information (baseball-reference.com/boxes/NY1/NY1195709080.shtml) and other data, as well as Retrosheet.org (retrosheet.org/boxesetc/1957/B09080NY11957.htm). The team baseball cards (New York Giants #317, Brooklyn Dodgers #324) are from the 1957 Topps series and were obtained from the Trading Card Database.

6 John Burbridge Jr., “September 1, 1957: Willie Mays homers in New York Giants’ last game at Ebbets Field,” SABR Baseball Games Project. The Giants had made it official on August 19 that they were moving to San Francisco for the 1958 season. The Dodgers’ official announcement that they were moving to Los Angeles did not come until October 8. (Emanuel Perlmutter, “Dodgers Accept Los Angeles Bid to Move to Coast,” New York Times, October 9, 1957: 1.

7 The 1957 season was Koufax’s third with the Dodgers, his potential still largely untapped. By season’s end, he had rather unnoteworthy career marks as both a starter and a reliever: 9-10, 4.00 ERA, 182 strikeouts in 204⅔ innings pitched. The full story of his Hall of Fame career is well told in his SABR biography (Marc Z. Aaron, “Sandy Koufax,” SABR Baseball Biography Project).

10 Barclay did one better right after his first shutout. He pitched another one at the Polo Grounds on August 11, a three-hitter against the Philadelphia Phillies.

12 Hank Sauer was signed by the Giants as a free agent after the 1956 season. Sauer played most of his career for the lowly Chicago Cubs, highlighted by being named 1952 National League Most Valuable Player largely based on his major-league-leading 37 home runs and 121 runs batted in.

13 Grissom finished the season with 14 saves, second best in the National League to the Dodgers’ Clem Labine (17).

15 Stan Musial hit 20 triples in 1943 and 1946. As for Hall of Famer Bill Terry, he contributed his own part to the intensity of the Giants-Dodgers rivalry as both a player (1923-1936) and a manager (1932-1941). For example, Terry was asked in January 1934 about the Dodgers and replied, “I haven’t heard much about the Dodgers. Are they still in the league?” Dodgers fans were incensed but got their revenge when the sixth-place Dodgers beat the second-place Giants in the last two games of the 1934 season, clinching the National League pennant for the St. Louis Cardinals. (Fred Stein, “Bill Terry,” SABR Baseball Biography Project).

21 Richard Goldstein, “Les Keiter, Announcer Who Recreated Giants Games, Dies at 89,” New York Times, April 15, 2009: A22. Les Keiter was also the radio voice of Big Five college basketball in Philadelphia (1963-1970). Although the author never personally met Keiter, we did each occupy a spot one night in the broadcast row at The Palestra, delivering the play-by-play accounts of a Penn vs. Rutgers basketball game, mine on WRSU radio. Perhaps during the game, he could be heard delivering one of his classic expressions such as “in again, out again, Finnegan” when a shot rimmed the basket.