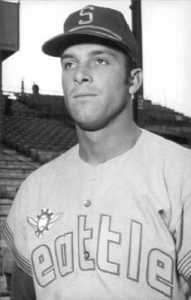 Change was in the air in the spring of 1969. As the turbulent Sixties came to a close, even staid major-league baseball went through a much-needed transformation. After a severe lack of offense in the “Year of the Pitcher,” baseball lowered the mound and shrank the size of the strike zone to give hitters a fighting chance. The adoption of the save as an official statistic led to several unintended consequences, including helping to raise the profile and salaries of top relief pitchers.1 But perhaps the most significant innovation that year was the introduction of divisional play with the addition of two expansion teams in both the National and American Leagues.2

Seattle and Kansas City were granted AL expansion franchises for the 1969 season. Seattle, which had been home to professional baseball since 1890,3 finally had a big-league team of its own, and the excitement in the Pacific Northwest was palpable. “It is like reaching for a star and grasping it, like dreaming of a fortune and waking up with one,” wrote Hy Zimmerman of the Seattle Daily Times on the eve of the Seattle Pilots’ inaugural game.4

Seattle manager Joe Schultz had raised expectations for his fledgling team by predicting a third-place finish in the six-team AL West,5 which wasn’t as far-fetched as one might think. Both AL expansion teams were assigned to the West, and the division’s other four teams had finished sixth through ninth in the previous year’s standings.

The schedule-makers couldn’t have picked a better opponent for the Pilots’ first game than the California Angels, the parent club of Seattle’s entry in the Pacific Coast League between 1965 and 1968. The Pilots’ general manager, Marvin Milkes, had been hired out of California’s front office,6 and he selected four players from his former employer in the October 1968 expansion draft.7 “Beating the Angels will be my pennant,” said Milkes.8

Marty Pattin, one of the players the Pilots plucked off California’s roster in the expansion draft, got the Opening Day start in Anaheim. The 26-year-old right-hander had posted a 2.79 ERA in his rookie season of 1968, although he had been unhappy that 48 of his 52 appearances were in relief. Pattin had been a starter throughout his minor-league career, including 44 starts with Seattle over the previous three seasons. “I want to prove to the Angel brass that I’m a starter,” he said.9

California countered with Jim McGlothlin.10 An AL All-Star in 1967, the 25-year-old righty was looking to rebound from a disappointing 1968 campaign that saw his record drop to 10-15.11

The Pilots enjoyed an auspicious start to their inaugural game, as they batted around in a 25-minute top of the first inning.12 Leadoff hitter Tommy Harper recorded the first hit in franchise history with a double down the left-field line.13 The next batter, Mike Hegan, drove a full-count fastball from McGlothlin over the right-field fence for a two-run homer,14 giving him the first round-tripper in franchise history.

A single, hit-by-pitch, and a walk loaded the bases for Jerry McNertney with one out. Despite being jammed with a McGlothlin offering, McNertney hit the ball off the bat handle and into left field for a single, scoring two more runs.15 The four-run outburst by the first seven Seattle batters abruptly ended McGlothlin’s outing. Southpaw Clyde Wright took over the pitching duties for the Angels and prevented any further damage in the inning.

Pattin stranded a pair of baserunners in the bottom of the first inning before running into more trouble in the second. Singles by Aurelio Rodríguez and catcher Tom Satriano put runners on first and second with nobody out, and the third batter of the inning, Bobby Knoop, lined a pitch deep into the right-field corner. Hegan nearly made a spectacular catch, but he crashed into the fence and dropped the ball.

Satriano, not knowing if the out was made, stopped between first and second and was passed by a sprinting Knoop.16 With a dazed Hegan lying on the ground, second baseman Harper scampered into right field to retrieve the ball; Rodríguez scored and a confused Satriano advanced to second base. In what turned out to be a pivotal play, Knoop was called out for passing Satriano on the basepaths and credited with only a single.17

Hegan was removed from the game and sent to hospital for x-rays, although he only suffered bruises to his wrist and hip and a cut lip.18 Pattin settled down after California’s baserunning blunder, retiring the next two batters to escape with a 4-1 lead.

Shortstop Jim Fregosi pulled California to within two runs with a solo homer in the bottom of the fifth.19

After a laboring Pattin walked the first batter in the sixth inning, Schultz yanked him in favor of Diego Seguí. The veteran right-hander, selected in the expansion draft after an effective season in relief with the Oakland A’s, kept California off the scoresheet for the next three innings, limiting the Angels to two singles.

But Seguí suddenly lost his control in the bottom of the ninth. He walked the first two batters of the inning before falling behind 1-and-0 to Fregosi,20 and Schultz brought in Jack Aker, the major-league saves leader from three years earlier.21 Fregosi laid down a sacrifice bunt, moving the potential tying runs into scoring position with one out. After 23-year-old Jay Johnstone cut the lead to 4-3 with an RBI groundout, Aker sealed Seattle’s first major-league victory by retiring Rick Reichardt.

The win completed a sweep of inaugural games for the four expansion franchises. Earlier in the day, the Kansas City Royals, Montreal Expos, and San Diego Padres all defied the odds by winning their big-league debuts. “It goes to show the owners did their job,” said an optimistic Schultz, referring to the quality of players made available in each league’s expansion draft.22

The Pilots played close to .500 baseball through the end of June, and it began to look as though Schultz’s prediction might come true. But injuries and a lack of depth caught up with the team.23 They posted a 9-20 record in July and hit rock bottom when they dropped 18 of 20 games from August 15 to September 4. The Pilots went on to finish dead last in the AL West with a 64-98 record, 33 games out of first place. To their credit, they still won a dozen more games than their NL expansion cousins.

On top of Seattle’s inaugural game and home opener—both wins—the Pilots’ 1969 season had several other highlights on the field.24 Hegan had an outstanding first half, and he was in the top 10 of the AL batting race in early July when he suffered a hamstring injury, forcing him to miss over three weeks of action.25 He was selected to represent Seattle in the All-Star Game, but the injury prevented him from playing.26 Military service also forced Hegan to miss most of August, and he was limited to only 38 at-bats in the second half. He hit .292 for the season—tops on the team − and his .427 on-base percentage would have ranked second in the AL if he had enough plate appearances to qualify for the batting title.27 Despite appearing in only 95 games, Hegan still tied Wayne Comer for the team lead in Baseball-Reference Wins Above Replacement (3.2 bWAR).

Seattle fans were also treated to some thrilling baserunning by Harper, who led the majors with 73 steals.28 It was the most stolen bases in the AL since Ty Cobb swiped 96 in 1915.

The Pilots had the worst pitching staff in the major leagues, but Seguí was selected as the team’s Most Valuable Player.29 The Cuban hurler led the team with 12 saves and 66 appearances, and his 2.6 bWAR was tops among Seattle pitchers.

Even with their creditable won-lost record, the Pilots attracted only 677,944 fans to antiquated Sick’s Stadium—150,000 below break-even mark.30 Many blamed the poor turnout on Seattle’s high ticket prices and the city’s struggling economy.31

Since the Pilots owners were heavily leveraged, the financial losses sent the team into bankruptcy proceedings.32 Just six days before the beginning of the 1970 season, the Pilots were declared insolvent, opening the door to their sale to a group led by 34-year-old car dealer Bud Selig, who immediately moved the team to Milwaukee.33 After only one season, the Seattle Pilots were no more.

The shift of the franchise to Milwaukee led to legal action by the State of Washington and King County in the fall of 1970. Early in 1976, the American League reached an out-of-court settlement with the plaintiffs, granting a second expansion franchise to Seattle.34

On April 6, 1977, the Seattle Mariners played their inaugural game in front of 57,762 fans at the Kingdome, which had opened one year earlier. Their starting pitcher that night was none other than 39-year-old Diego Seguí, the only player to appear in a game for both the Seattle Pilots and the Seattle Mariners.35

In addition to the sources cited in the Notes, the author consulted Baseball-Reference.com, Retrosheet.org, and the Baseball Player Contract Cards Collection from The Sporting News. Unless otherwise noted, all play-by-play information for this game was taken from the article “Hegan Hits One Over Fence, Runs Into It” on page 32 of the April 9, 1969, edition of the Seattle Daily Times.

Photo of Mike Hegan downloaded from the Trading Card Database.

2 Another significant change was the naming of Bowie Kuhn as baseball commissioner early in 1969. Shortly before he resigned in December 1968, outgoing commissioner William Eckert announced rule changes that included the lowering of the mound and the shrinking of the strike zone. Paul Hensler, “A Farewell to Arms: The Major Leagues in 1968 and the Transition to a New Modern Era,” SABR Baseball Research Journal, 2008, https://sabr.org/journal/article/a-farewell-to-arms-the-major-leagues-in-1968-and-the-transition-to-a-new-modern-era/, accessed June 29, 2022.

7 The four California Angels selected by the Pilots in the AL expansion draft were Don Mincher, Marty Pattin, Steve Hovley, and Paul Click. Click was the only member of that group who never played for the Pilots (or in the majors). The other three players received significant playing time with Seattle in 1969. Mincher was the most productive of the group; he hit .246 with 25 home runs and 78 RBIs in 1969. Maxwell Kates and Bill Nowlin, eds., Time for Expansion Baseball (Phoenix: Society for American Baseball Research, 2018), 229.

11 McGlothlin’s 3.54 ERA in 1968 translated into an Adjusted ERA (ERA+) of 82, which means he was 18 percent worse than league average after adjusting for park effects.

17 Knoop would have had at least a triple and possibly an inside-the-park home run if Satriano had kept running. Verrell, “Ouch! Only 11,930 See All Go Wrong in Angel Debut.”

18 X-rays were negative and Hegan was able to pinch-hit the next day and return to the starting lineup in time for the Pilots’ home opener on April 11. Luebker, “It’s Up to Mike.”

21 Aker’s 32 saves in 1966 were credited retroactively, since saves were not an official statistic until 1969.

24 The Seattle Pilots also had a lot of off-field highlights during the 1969 season. Many of those were described in Jim Bouton’s ground-breaking book Ball Four, which provided an unvarnished look at the lives of big-league ballplayers. The 30-year-old Bouton, a reliever with the Pilots until he was traded to the Houston Astros on August 24, was taking notes and speaking into a tape recorder daily during the 1969 season. The release of Ball Four on June 21, 1970, angered the baseball establishment. But by the time the book was released, the Pilots had moved to Milwaukee. Mark Armour, “Ball Four,” https://sabr.org/bioproj/topic/ball-four/, accessed June 29, 2022.

25 Hegan injured his hamstring running out a groundball in Kansas City on July 6. He was hitting .296 at the time. Canadian Press, “Seattle Pilots Gain from Misfortune as Injury Replacements Come Through,” North Bay (Ontario) Nugget, July 7, 1969: 12.

26 Hegan was replaced on the All-Star team by Pilots first baseman Don Mincher.

28 As of the end of the 2021 season, Harper still held the Brewers/Pilots franchise record for most stolen bases in a season. Scott Podsednik was second with 70 steals in 2004.