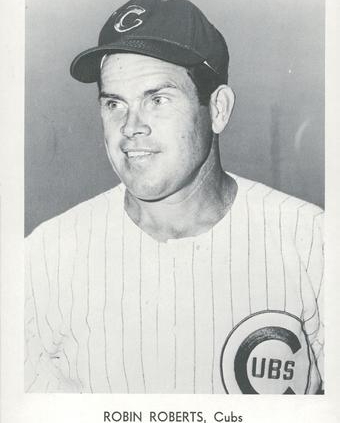 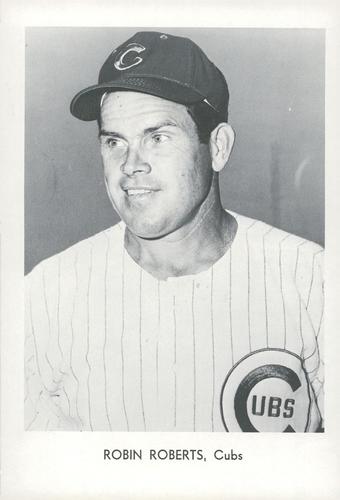 To tell the story of Robin Roberts’s 286th and final major-league victory is to tell a tale of a fading star passing the baton to a future star and of two old friends in the twilight of their careers patching together one more winning effort. The rising star was Ferguson Jenkins. The old friends were longtime Philadelphia Phillies stalwarts Roberts and Curt Simmons.

By August 1966, future Hall of Fame pitcher Roberts was just about at the end of the road. With his 40th birthday just a month away and his once-blazing fastball a distant memory, Roberts had been released by the Houston Astros on July 4. He immediately hooked on with the Chicago Cubs as a player-coach for manager Leo Durocher’s last-place team. As a Cubs pitcher, Roberts was having little success (1-3, 5.76 ERA in nine appearances). As a pitching coach, he became an advocate for the young Jenkins, who had come from the Phillies to the Cubs in an April trade.

Durocher had been using Jenkins almost exclusively in relief.1 Roberts felt that Jenkins sometimes got hit around because he did not have confidence in his stuff. He encouraged Jenkins to throw the fastball more and he encouraged Durocher to try Jenkins as a starter.2 In late August, Jenkins replaced the struggling Roberts in the rotation. After a solid start on August 25 against the New York Mets, yielding only one earned run in 8⅓ innings,3 Jenkins was back on the mound on August 29 to face Tony Cloninger and the seventh-place Atlanta Braves at Atlanta Stadium.

The Braves, in their first season in Atlanta after moving from Milwaukee, fielded a powerful offensive team that included leadoff batter Felipe Alou (.323 batting average), cleanup hitter Joe Torre (.309), and slugger Henry Aaron (34 home runs on his way to a league-leading 44).

On the other hand, Cloninger, despite an 11-9 record coming into the game, had been struggling for much of the year. He was among the league leaders in walks, wild pitches, and home runs allowed. The Cubs, however, could do little against Cloninger in the early innings. A first-inning single by Don Kessinger, a two-out triple by Glenn Beckert in the third, and two walks in the fourth were all they could muster through five innings.

Atlanta, meanwhile, got one run off Jenkins in the second inning on Gary Geiger’s home run. But that solo shot and a single by Eddie Mathews were the sum of the Braves offense. In the sixth inning the Cubs put together consecutive singles by Ron Santo, Ernie Banks, and John Boccabella to tie the score.

An unearned run in the seventh put the Cubs ahead. Byron Browne singled, and Braves catcher Torre threw wide of first after fielding Jenkins’s bunt. Jenkins was safe at first and Browne was on second. Browne moved to third on Don Kessinger’s groundout. Beckert delivered the run with a sacrifice fly, giving the Cubs a 2-1 lead.

Jenkins held that lead going into the ninth inning, but Mathews led off that inning with a double. Lee Bales4 ran for him. Aaron flied out, but Torre singled, sending Bales to third.

That was all for Jenkins; Durocher brought in rookie reliever Len Church5 to pitch to Rico Carty. Carty sent a fly ball into center field, deep enough to score Bales with the tying run. After walking Geiger intentionally, Church escaped the inning by striking out Denis Menke. The game moved into extra innings.

Knuckleballer Phil Niekro, who had replaced Cloninger after the latter was pinch-hit for in the eighth, held the Cubs off the board in the 9th, 10th, and 11th. Church worked a scoreless bottom of the 10th but ran onto trouble in the 11th when Torre walked and Carty singled to start the inning.

With the left-handed-hitting Geiger coming to the plate, Durocher called on 37-year-old lefty Curt Simmons. The Cubs had purchased Simmons from the St. Louis Cardinals in late June. He had had a long and successful career as a starter for the Phillies, where he formed a dynamic one-two pitching duo with Roberts, and the Cardinals. Simmons was now attempting to hang on as a swingman with the Cubs.

Geiger bunted a Simmons pitch too hard toward third and Santo converted an unassisted force out. Out came Durocher again to bring in right-hander Cal Koonce, who, after walking Woody Woodward to load the bases, got the final two outs of the inning.

Clay Carroll, making his 59th appearance of the season,6 came on to pitch for the Braves in the 12th and worked around several baserunners to hold the Cubs scoreless for two innings. Durocher sent Lee Thomas up to hit for Koonce in the 13th, so he needed a new pitcher for the bottom of the inning. With his bullpen running thin, Durocher called on player-coach Roberts.

Geiger greeted Roberts with a single to center and took second as Menke was retired on a slow roller to short. Woodward grounded out, third baseman Santo to first baseman Banks, for the second out. Pitcher Carroll was allowed to hit and singled on a ball to the hole at short. Geiger moved to third on the play. Roberts escaped the jam by getting Felipe Alou to ground to shortstop for a force out at second.

The Cubs broke the tie in the top of the 14th. With one out, Banks singled and Ron Campbell came in to run for the aging “Mr. Cub.” Adolfo Phillips doubled, sending Campbell to third. Braves manager Billy Hitchcock ordered Randy Hundley intentionally walked to load the bases.

Durocher sent George Altman up to hit for Browne. Altman singled to center to score Campbell and Phillips and send Hundley to third. As Geiger threw to third, Altman was thrown out trying to go to second, third baseman Miguel de la Hoz7 to second baseman Woodward. With a two-run lead and two outs, Durocher allowed Roberts to bat for himself. He ended the inning by grounding out.

Roberts returned to close out the game in the bottom of the 14th. Leading off was de la Hoz in what had been Mathews’ spot in the order. Mathews had a career .330 batting average against Roberts with 13 home runs, but he had left the game in the ninth. Roberts struck out de la Hoz. He got the dangerous Aaron – in his 156th career at-bat against Roberts – on a long fly ball to center.8 Roberts walked Torre, and Carty got the remaining fans on their feet cheering with a screamer to right field, but Billy Williams tracked it down 395 feet from home plate for the final out.9

Thus ended Robin Roberts’ 286th major-league victory. It made Roberts the only pitcher to defeat the Braves in all three of their homes: Boston, Milwaukee, and Atlanta.10 It was also the fifth extra-inning victory for the Cubs over the Braves in five opportunities during the season.11

While Jenkins received a no-decision, the 23-year-old right-hander’s second excellent start in a row reflected the passing of generations, as Jenkins’s endurance, control, and results over the next decade and a half evoked Roberts’s mound work in the 1950s and 1960s. Jenkins won 20 or more games in six consecutive seasons for the Cubs and concluded his Hall of Fame career with 284 victories, nearly matching his mentor’s total.12

It also seemed fitting that Roberts’s old friend (and next-door neighbor in suburban Philadelphia), Curt Simmons, pitched in the game. Simmons ended his fine career the following year with 193 victories. Between Roberts, Jenkins, and Simmons, the three former Phillies who pitched for the Cubs on this night in Atlanta racked up a combined 763 major-league victories, with outstanding performances spanning the 1940s to the 1980s.13

After the game Roberts said, “I’d still like to reach the 300-victory mark. If the Cubs let me come back next year, I think I can do it.”14 The Cubs did invite Roberts back for 1967, but only as a pitching coach.

As to that offer, Roberts said, “Mr. Wrigley doesn’t have enough money to pay me to work for Leo.”15 Besides, he still wanted to pitch. To chase that elusive 300th win, Roberts signed to pitch for the Phillies’ Double-A minor league affiliate in Reading, Pennsylvania. He pitched well there through June 15 and then went home to await the call from a major-league club. It never came.16

Roberts was inducted into the Hall of Fame in 1976.

In addition to the sources cited in the Notes, the author consulted the Baseball-Reference.com and Retrosheet.org websites for relevant material and the box scores.

1 Jenkins started three games before entering the rotation for good in August. In his Cubs debut, on April 23, Jenkins worked 5⅓ scoreless innings in relief to earn the win over the Los Angeles Dodgers.

3 Jenkins left the game in the top of the ninth with the score tied 2-2 and one of the Mets’ runs unearned. Simmons recorded the final two outs of the ninth, then recorded the win when Ernie Banks scored on a wild pitch.

4 This was Bales’ fifth major-league game. He played in only 31 games over two seasons, mostly as a pinch-hitter or pinch-runner.

5 This was Church’s second major-league appearance. He made only four altogether, all in 1966.

6 Carroll led the league with 73 appearances for the 1966 season.

7 De la Hoz had entered the game at third base after Mathews was run for in the ninth.

8 Aaron batted .282 lifetime against Roberts, with 9 homers and 15 strikeouts.

12 Jenkins and Roberts had remarkably similar careers. Roberts won 286 games, Jenkins 284. Both had six consecutive years of 20-plus wins. Roberts had a 3.41 career ERA. Jenkins was 3.34. Both were also among the best control pitchers in history, pitching more than 4,500 innings each and walking fewer than 1,000 batters. Jenkins had 49 shutouts, Roberts 45. Both also gave up a prodigious number of home runs: Roberts 505, Jenkins 484.

13 Nearly 17 years to the day later, on August 18, 1983, Jenkins, then 40 years old and pitching for the Cubs in his final major-league season, took a shutout into the ninth inning against the Braves at Wrigley Field. Chicago secured the 3-0 win for Jenkins when Lee Smith – himself a future Hall of Famer in the early years of his career – came in and got the final out.