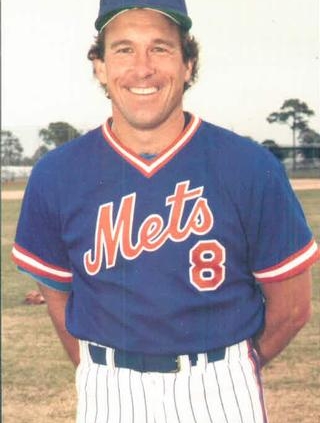 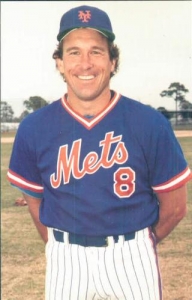 During their 1986 championship quest, the New York Mets minted unforgettable images of late-game magic. Scenes like Lenny Dykstra tracking the flight of a home run that transformed a ninth-inning deficit into National League Championship Series victory. Or Jesse Orosco flinging his glove in the air upon securing a berth in the World Series. Or teammates mobbing Ray Knight after an improbable extra-inning rally kept their dream alive.

As the season’s third week began in April, however, these magic moments were purely aspirational. The Mets had unquestioned talent and unrivaled ambition – but a spectator’s view of the postseason for 12 seasons in a row. But their 6-5 win over the Pittsburgh Pirates on April 21, a night of rallies culminating in clutch hits by Tim Teufel and Gary Carter, continued a pacesetting winning streak and foreshadowed October’s late-inning thrills.

The Mets entered 1986 seemingly on the verge of something big. Their 24-man roster included 13 once or future All-Stars.1 Their 188 wins over the previous two regular seasons led the NL.2 Their likenesses decorated America’s magazine covers and bedroom walls.3 Their manager, Davey Johnson, vowed to “dominate” the division.4 But all they had to show for the stars, wins, ink, and boasts were back-to-back runner-up finishes in the NL East; no new flags had graced Shea Stadium since their unlikely 1973 pennant-winners.

New York’s first two weeks of the season – five wins, three losses, three games postponed by weather – had done little to distinguish them from the pack, but a three-game sweep of the Philadelphia Phillies hinted at their untapped capacity.5 The Pirates, winners of five in a row after a majors-worst 57-104 record in 1985, followed the Phillies to Flushing Meadows.6

Right-hander Rick Aguilera faced Pittsburgh in Monday night’s series opener. The 24-year-old Aguilera was part of a parade of talented young pitchers onto the Mets’ staff during their NL East ascendance. Ron Darling had arrived in 1983. Dwight Gooden and Sid Fernandez in 1984. Roger McDowell and Aguilera a year later. Debuting in June 1985, Aguilera spent the rest of the season in the rotation; his 4-2 record and 2.95 ERA in September and October helped to keep the Mets close to the division-winning St. Louis Cardinals.7

The Pirates’ R.J. Reynolds, who had homered on Gooden’s third pitch of the season on Opening Day, led off by swatting Aguilera’s fifth pitch of the game over George Foster’s head in left for a double. One out later, Aguilera had to duck under Johnny Ray’s line-drive single as Reynolds scored for a 1-0 Pittsburgh lead. Jim Morrison drove a hanging slider over the fence in left to make it 2-0 in the second.

Pittsburgh threatened again in the third. After hitting a single with two outs, Ray was running on a 3-and-2 pitch to Sid Bream, who lined Aguilera’s slider down the right-field line. Ray kept on going as Darryl Strawberry hustled over, picked up the ball near the stands, and fired a one-hop strike toward home. Carter grabbed the big hop, blocked the plate, and tagged a sliding Ray on the thigh, denying the Pirates a larger lead.

Left-hander Larry McWilliams had emerged as a leader in Pittsburgh’s rotation with 27 wins during 1983 and 1984, but shoulder problems had hindered him in 1985.8 He pitched out of a bases-loaded, one-out jam in the first by fanning Strawberry and getting Foster to ground out. A clean second followed; when Kevin Mitchell and Teufel popped up to open the third, McWilliams had retired seven in a row.

Keith Hernandez batted with two out in the third; McWilliams’s breaking ball hit him on the right hand. Carter took a fastball over the plate, then swung early on a breaking ball for strike two. Two balls later, McWilliams threw a high curve. Carter ripped it over the fence in left center, tying the game.

Aguilera and McWilliams reasserted themselves, trading scoreless innings in the fourth and fifth, allowing no more than a single baserunner in each frame. The game remained tied as the Pirates batted in the sixth.

Ray led off with his third hit of a game, a single past Rafael Santana at short. Aguilera struck out Bream, bringing up Mike Brown. The muscular right fielder attacked the first pitch, and it soared over the 396-foot sign in left-center for a two-run homer. Pittsburgh was back on top, 4-2.

McWilliams had a lead to protect, and he spent the next two innings snuffing out Mets rallies with fastballs and slow breaking balls. Foster reached on Ray’s one-out bobble of his grounder to second in the sixth, but shortstop Sam Khalifa made a diving stop on Knight’s shot up the middle and started an inning-ending double play. Wally Backman’s pinch-hit single and Teufel’s double set up Hernandez with two runners in scoring position and two outs in the seventh. But Hernandez, unable to extend his arms against a breaking ball, hit a harmless grounder to Ray for the third out.

Hernandez’s inning-ending groundout came on McWilliams’s 102nd pitch of the night,9 and Jim Leyland, managing the ninth game of what turned out to be a 22-season major-league career, turned to right-hander Cecilio Guante in the eighth. Guante had not allowed a run through six appearances in 1986; another successful outing appeared at hand after Carter’s check-swing grounder to second and Strawberry’s swing-and-miss at a two-strike breaking ball.

With the count 2-and-2 on Foster, Guante’s slider flirted with the outside corner. He skipped off the mound as catcher Tony Peña held the ball, anticipating umpire Eric Gregg’s concurrence. But Gregg’s arm remained by his side, the count went full, and Guante’s next pitch missed outside for ball four.

The right-handed-batting Knight was up next. During spring training, trade speculation had targeted the 33-year-old third baseman, including rumors of an attempted deal to the Pirates for Lee Mazzilli.10

He looked toward the dugout, wondering whether Johnson would pinch-hit with a lefty.11 “I was looking over my shoulder,” Knight said afterward.12 “[Johnson] winked at me. I got a big surge.”13

Guante, noticeably displeased by umpire Gregg’s call, paced behind the mound, blowing on his hand. He threw two balls to Knight, bringing Leyland to the mound. “Don’t let up,” Leyland told Guante.14 “Make sure he hits your good stuff.”15

Knight drove Guante’s next pitch over the left-field fence, deadlocking the game again, 4-4. The sparse crowd of 10,982 requested a curtain call, and Knight pumped his arm into the air.

Aguilera had departed for Randy Niemann after six innings,16 and Johnson summoned McDowell for the top of the ninth. Former – and future – Met Mazzilli pinch-hit for Khalifa and walked on four pitches. The Brooklyn native took second on pinch-hitter Bill Almon’s sacrifice and third on Reynolds’s groundout.

Joe Orsulak, hailing from nearby Parsippany, New Jersey, dropped a surprise bunt between home and third. Carter and Mitchell – who had moved from center to third – had no play. Mazzilli ran home. Pittsburgh had a 5-4 lead.

Leyland sent in left-hander Pat Clements for the ninth. Dykstra, who had entered the game to play center, dropped a single in front of Brown in right. Mitchell sacrificed Dykstra to second.

Teufel took a strike. He lined the next pitch down the line in left. Reynolds cut it off before it reached the corner, but Dykstra scored the tying run and Teufel had a double.

Clements walked Hernandez on four pitches, and Leyland came out of the dugout. Jim Winn was in to face Carter.

A day earlier, Winn had allowed a game-tying ninth-inning home run to Keith Moreland of the Chicago Cubs.17 Winn’s first pitch to Carter, a slider, missed high for a ball. The second pitch was in the zone, and Carter lined it into the left-field corner. Teufel scored, and the Mets had a 6-5 win.

“After ball one, I was looking for a strike,” Carter said afterward.18 “He couldn’t afford to fall behind, not with Darryl Strawberry behind me. That’s a plus having a hitter like Darryl behind me.”19

The Mets beat the Pirates a day later for their fifth consecutive win.20 On April 24, they made it six straight, tying the Cardinals on Howard Johnson’s two-run homer in the top of the ninth and winning in the 10th.21 They didn’t lose again for the rest of April, as their streak eventually reached 11 in a row.22 By May 10 they had won 18 of 19 and enjoyed a five-game lead over the division.23

New York steamrolled to 108 regular-season wins and a divisional landslide. The early-season win over the Pirates initiated a theme of late-inning rallies, last-at-bat wins, and triumphant embraces – qualities especially apparent after Game 162. The Mets’ signature postseason wins in Games Three and Six of the NLCS and Game Six of the World Series involved deficits overcome and victories in doubt until the final hit, strike, or error. These trademarks first surfaced on a Monday night in April at Shea Stadium.

In addition to the sources cited in the Notes, the author consulted the Baseball-Reference.com and Retrosheet.org websites for pertinent material and the box scores noted below. He also used game coverage from the New York Daily News, Pittsburgh Post-Gazette, and Pittsburgh Press newspapers; and a YouTube video of WOR-TV’s game broadcast, at the link below.

SABR member Greg Prince’s Mets blog Faith and Fear in Flushing was invaluable to the author’s understanding of this game’s significance to the Mets’ 1986 season. Greg also provided insightful comments on an earlier version of this article.

2 The Detroit Tigers and Toronto Blue Jays also had 188 total regular-season wins over 1984 and 1985. The St. Louis Cardinals were second in the NL with 185 wins during that period.

3 A photo of Dwight Gooden, for example, appeared on the cover of the April 7, 1986, edition of Time. A season earlier, Gooden was on Sports Illustrated’s April 15, 1985, “Baseball ’85” issue and Gooden and Hernandez were on The Sporting News’ April 8, 1985 “Play Ball” special section.

6 The Pirates extended their streak to five games with a 14-8 win over the Chicago Cubs on April 19. Bob Hertzel, “Spring Madness: 14-8 Win Is Pirates’ 5th in Row,” Pittsburgh Press, April 20, 1986: D1. A day later, their game at Wrigley Field was suspended on account of darkness after 13 innings, with the score tied, 8-8. Bob Hertzel, “Pirates’ Spree Hits 5½ with Standoff,” Pittsburgh Press, April 21, 1986: C1. When the suspended game was resumed on August 11, Pittsburgh won in 17 innings, with all official statistics added retroactively to April 20. Bob Hertzel, “Morrison, Diaz Make Pirates King for a Day,” Pittsburgh Press, August 12, 1986: C1. Accordingly, the Pirates officially had a six-game winning streak entering the game but chronologically a five-game streak.

9 The author determined McWilliams’ pitch count from his review of WOR’s television broadcast.

16 According to the author’s review of WOR’s television broadcast, Aguilera threw 100 pitches over six innings.