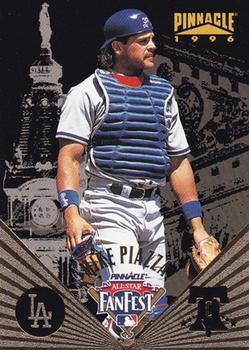 Mike Piazza had an affinity for Veterans Stadium long before he garnered more votes than any other National League player and was elected as the senior circuit’s starting catcher for the 1996 All-Star Game in Philadelphia. 1

Not only had the Los Angeles Dodgers superstar recorded a hit in 15 of his 16 career games there,2 he had grown up the son of a Philadelphia Phillies season-ticket holder who was a childhood friend of Dodgers manager Tom Lasorda. That friendship afforded Piazza the opportunity to serve as the batboy for the Dodgers when they were in town in the 1980s and was the primary reason Los Angeles drafted Piazza as the 1,390th overall selection in the 1988 amateur draft.

Yet one of Piazza’s fondest memories from the ballpark likely came in that 1996 All-Star Game.

Piazza hit a mammoth leadoff homer in the bottom of the second inning and smacked a two-out RBI double the next inning to earn game MVP honors and set the stage for the NL’s 6-0 shutout of the American League in front of 62,670 fans. 3

Oh, and before the game, Piazza caught a ceremonial first pitch from his childhood hero, Mike Schmidt, one of five Philadelphia Hall of Famers who simultaneously tossed pregame pitches.

“I’m running out of words to describe all this,” said Piazza, who earned 2,272,115 votes from the fans. 4 “It really hit me when I caught Mike Schmidt’s first pitch. I grew up watching him from the seats behind third base, dreaming of emulating him as a major league player. To have him write on the ball, ‘wishing you the best … I think you’re the best,’ and then to hit a home run and become the MVP is just indescribable.” 5

Matching up from the mound for the 67th edition of the midsummer classic were Cleveland Indians ace Charles Nagy 6 and Atlanta standout John Smoltz 7 in a rematch of Game Three of the 1995 World Series, which saw the Indians walk off with victory after 11 innings. 8

The AL looked ready to take the lead in the first. Cleveland center fielder Kenny Lofton shot a leadoff single up the middle, easily stole second, and moved up again when Baltimore’s Roberto Alomar flied out to center for the second out. Indians left fielder Albert Belle struck out to end the inning, leaving his speedy teammate stranded at third in the first of four dismal at-bats for the slugger. 9

New York Mets center fielder Lance Johnson — who was starting his only career All-Star Game as an injury replacement for San Diego’s Tony Gwynn — drove Nagy’s first offering of the game into the left-center-field gap for a double. Belle slid to knock down the ball in left, but Johnson sprinted up the baseline and narrowly beat Belle’s throw into second. Johnson came around to score on groundouts from Cincinnati’s Barry Larkin and San Francisco’s Barry Bonds.

Boston’s Mo Vaughn ripped Smoltz’s first pitch of the second inning into the right-field corner for a double, but the AL was again unable to capitalize as the next 11 batters would be set down in order. Following Smoltz on the hill were Florida ace Kevin Brown, Braves rotation-mate Tom Glavine, and Philadelphia closer Ricky Bottalico, the lone representative from the Phillies.

“That was not a typical night for American League hitters,” said Braves manager Bobby Cox, who won the right to guide the NL after leading Atlanta to the 1995 World Series championship. “Believe me, those guys can bomb the ball out of any ballpark.” 10

Meanwhile, the NL packed onto its lead. Piazza, whose .363 batting average led the senior circuit at the All-Star break, drove Nagy’s 2-and-1 pitch deep into the upper deck in left field for a solo homer that traveled an estimated 445 feet.11 After Colorado’s Dante Bichette grounded out, Atlanta’s Chipper Jones — who replaced San Francisco’s injured starter Matt Williams — singled to center and moved to second on a groundout by Houston’s Craig Biggio. Montreal’s Henry Rodriguez — a controversial omission from the original roster who was added to the squad after Gwynn was diagnosed with a slight tear of his right Achilles tendon12 — followed with an RBI single to left for a 3-0 lead.

California Angels starter Chuck Finley relieved in the third and allowed back-to-back singles to Larkin and Bonds to put runners on the corners. Atlanta’s Fred McGriff struck out and Bonds was caught stealing on the third strike for the unconventional double play, but Piazza struck again. He ripped a 1-and-0 pitch into the right-center-field gap for an RBI double to become the ninth player in All-Star Game history to homer and double in the same game — a feat also accomplished by Schmidt in 1981.

The NL threatened again in the fifth against Texas starter Roger Pavlik. Johnson singled and stole second to open the inning, but he was caught trying to swipe third base. He would have become the fourth player to steal two bases in an All-Star Game; Lofton instead swiped that honor by stealing second in the sixth inning. 13

“If I’d known that I’d tied a record, I would have stolen a third base,” Lofton said afterward. 14

In the bottom of the sixth, San Diego’s Ken Caminiti sent a home run to the right-field seats for a 5-0 NL lead. Bichette sandwiched a double between strikeouts by Piazza and Colorado’s Ellis Burks, who swung through a third strike in the dirt and reached first when the ball rolled to the on-deck circle. With runners on the corners, Biggio hit a fielder’s-choice grounder to shortstop to bring in the final run of the game.

The victory was the third straight for the NL, its best streak since it won 11 straight from 1972 to ’82. The senior circuit held an all-time advantage of 40-26-1. 15 Smoltz earned the victory, while Nagy was saddled with the loss.

There were a handful of inconsequential hits over the final three innings, including Johnson’s leadoff single in the seventh. Johnson – who was only added to the roster because the NL didn’t have any true center fielders – became the third player in All-Star Game history to collect three hits in his first appearance. 16

“I had a lot of fun,” Johnson said, “and I’m thankful Bobby (Cox) had enough faith in me to spark the National League.” 17

Perhaps the most touching moment of the night came in the bottom of the seventh when St. Louis shortstop Ozzie Smith came to the plate in his 15th and final All-Star Game. Smith had announced earlier in the year that he would retire at season’s end, and he became visibly emotional when he received a resounding ovation from the crowd, including chants of, “Ozzie! Ozzie! Ozzie!”

“Not everybody gets to experience this,” Smith said. “It’s a very special moment for anybody who was ever on a stage. It was one that will live on forever.” 18

The second-biggest ovation came for Baltimore’s Cal Ripken Jr., who in late 1995 broke Lou Gehrig’s record for consecutive games played. That streak was still intact at 2,239 games by the 1996 All-Star Game, but oddly enough, it was there that he sustained an injury.

After the pregame team photo, Chicago White Sox reliever Roberto Hernandez lost his footing exiting the platform, and when he swung his left arm to regain his balance, he struck and broke Ripken’s nose.

“This is a good excuse for me. If I swing and miss, something probably is wrong. If I make an error, there’s a good indication something might be wrong,” Ripken said in jest before going 0-for-3 in the game. “I reserve the right to use it as a crutch if I have to.” 19

As for Hernandez: “I thought I was going to have to get a bodyguard to go to Baltimore.” 20

Hernandez didn’t pitch in Baltimore until September 11. He struck out Ripken as part of a two-inning relief appearance but ended up taking the loss in Baltimore’s 7-6 extra-inning victory.

In addition to the sources cited in the Notes, I used the Baseball-Reference.com, Stathead.com, and Retrosheet.org websites for regular-season statistics and team information. I also viewed the game in its entirety on the MLB YouTube channel:

1 It was the first All-Star Game in Philadelphia since 1976, when the historic city was a natural selection as the United States celebrated its Bicentennial.

3 This was the seventh shutout in All-Star Game history, and the NL’s first shutout win since 1987.

6 Nagy became the first Indians pitcher to start the All-Star Game since Gaylord Perry in 1974.

8 The hyped matchup of starters in the World Series proved to be a disappointment. Smoltz was charged with four earned runs in 2⅓ innings, while Nagy allowed five earned runs over seven frames.

9 As of 2021, Belle and Lofton were the only two players elected starters for the American League who had not been inducted into the Hall of Fame. Baltimore’s Brady Anderson started the game but was an injury replacement for elected starter Ken Griffey Jr.

11 It was Piazza’s second straight All-Star Game at-bat that ended in a home run. He had also homered in his final at-bat in the 1995 midsummer classic at the Ballpark in Arlington.

12 Before adding Rodriguez to the roster following Gwynn’s injury, Bobby Cox was quoted in advance of a July 2 game in Montreal: “I suppose they’re going to be pelting me with Oh Henry! bars all night.” Jeff Blair, “Gwynn’s Injury Opens Door,” Montreal Gazette, July 3, 1996: E2.

16 Vince DiMaggio (1943) and Ken Boyer (1956) are other players to record three hits in their All-Star Game debut. Through 2020, no player since Johnson has repeated the feat.