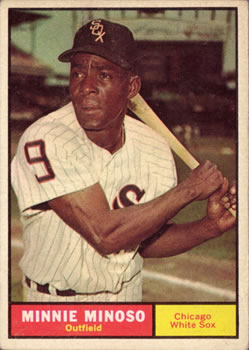 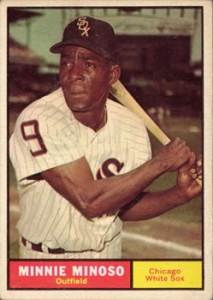 Minnie Miñoso was coming home to Chicago after two seasons with the Cleveland Indians. On December 6, 1959, the White Sox reacquired the 34-year-old Miñoso in a multiplayer deal with the Indians.1 Miñoso had played left field for Chicago from 1951 through 1957 before being traded to Cleveland for Al Smith and Early Wynn. A fan favorite at Comiskey Park,2 Miñoso had finished fourth in the American League’s Most Valuable Player balloting in 1951, 1953, and 1954.3

“Frank Lane [Cleveland’s general manager] gave me a lot of breaks,” Miñoso said of the man who was Chicago’s general manager when he first played for the White Sox in 1951. “He’s a helluva guy. … Cleveland is all right and the fans are all right. But here, it’s like you’re home. … I’m comfortable here. I was here before and I feel like this is my home.”4

With the weather in the mid-60s for the 1:30 P.M. game, a new White Sox Opening Day attendance record was set.5 A crowd of 41,660 watched Chicago’s Mayor Richard Daley throw out the first pitch.6 Club President Bill Veeck had added two wings to Comiskey Park’s scoreboard for 1960; one side showed lineups and batting averages, and the other displayed “Sox-o-gram” messages to the fans.7 Before the game, the “Sox-o-gram” side flashed: “Welcome Home Minnie, It’s Good to Have You Back.”8

Wynn, who won 22 games and the Cy Young Award in 1959, started the game for the defending American League champions, who had won their first pennant since the scandal-tainted 1919 Black Sox. The 40-year-old was the winningest active pitcher in the major leagues with 271 victories.9 He held Kansas City hitless over the first three innings, allowing only a two-out walk in the third to pinch-hitter Bob Johnson, who was making his first plate appearance in the big leagues.

A’s starter Bud Daley, a 16-game winner in 1959, was a victim of Kansas City’s poor defense in the early innings.10 Luis Aparicio led off the bottom of the first with a bunt down the third-base line for a single. Nellie Fox’s grounder to first was mishandled by Norm Siebern for an error. Miñoso bunted but was called out for running inside the baseline, with Fox and Aparicio ordered back to first and second.

The White Sox again capitalized on shaky defense to add to their lead in the second. Aparicio singled with one out, and A’s second baseman Jerry Lumpe booted Fox’s potential double-play grounder, with the runners advancing to second and third. After Tuttle made a one-handed, diving catch of Miñoso’s liner to center,12 Aparicio scored and Fox took third. Kluszewski lined a single to right, driving in Fox for Chicago’s fifth unearned run.

The A’s rallied against Wynn in the fourth. Lumpe singled to start the inning. After a foul out, Siebern walked. Singles by Cerv and Dick Williams scored two runs, cutting the deficit to 5-2.

With runners on first and second and one out, Harry Chiti singled to short left. Cerv rounded third, realized he could not score, and attempted to return to the bag. But Williams was already at third; Miñoso’s throw caught Cerv in a rundown between third and home, and Sherm Lollar tagged him out, stalling Kansas City’s comeback.13

Chicago quickly struck back. Wynn led off the bottom of the fourth with a single off Johnny Kucks, who had replaced Daley at the start of the third. Aparicio singled and Fox walked to load the bases for Miñoso.

Miñoso – who had homered in his White Sox debut in 1951 – followed with a grand slam to deep center. His fifth career grand slam put the White Sox up 9-2.

Staked to what appeared to be a comfortable lead, Wynn returned to the mound in the fifth, needing three outs to qualify for the win. But Whitey Herzog pinch-hit for Kucks to start the inning and homered to deep right. After Miñoso caught Tuttle’s low liner to left, Lumpe walked and scored on Hank Bauer’s double to left-center.

With the lead down to 9-4, that was all for Wynn; Mike Garcia came in to relieve, and Kansas City’s attack continued. Siebern’s single to right advanced Bauer to third. Cerv hit a short pop fly between short and left. Miñoso avoided a collision with Aparicio but dropped the ball for an error, as Bauer scored Kansas City’s third run of the inning.

Ken Johnson came in for the A’s and pitched three scoreless innings. He allowed only a one-out double by Landis in the fifth and a two-out single by Kluszewski in the sixth.

Kansas City continued to chip away in the sixth. With two outs, singles by Johnson and Tuttle put A’s at first and second. Lumpe’s double in the gap between center and right scored both runners. Turk Lown relieved Garcia and retired Bauer on a groundout. Chicago’s lead, which was seven runs at the end of the fourth inning, was now only two, at 9-7.

Miñoso’s defense kept the A’s from getting even closer in the seventh. Singles by Williams and Siebern gave Kansas City two runners on with one out. Chiti hit a drive to left-center, but Miñoso tracked it down with a running catch.14 The runners returned to their bases, and Hamlin’s fly out to center ended the A’s threat.

The bullpens kept the score at 9-7 heading to the top of the ninth. Lown, who had pitched scoreless innings in the seventh and eighth, remained in the game. But Siebern led off the inning by hitting a two-strike pitch into the right-center-field stands for a home run. It was a one-run game.

After Cerv walked on four pitches, Gerry Staley relieved and walked Williams. Chiti bunted toward first. Kluszewski appeared to have a play at third, but mishandled the ball. His toss to first pulled Fox off the bag, loading the bases.15

Hamlin singled to left. Cerv scored the tying run, but Miñoso came through on defense once again, throwing out Williams at the plate.

Frank Baumann relieved Staley and walked pinch-hitter Hank Foiles, loading the bases for the second time in the ninth. Ray Moore was brought in to face Tuttle, who grounded the first pitch up the middle. Fox fielded the ball, stepped on second and threw to first, ending the inning with the score tied, 9-9.

In the bottom of the ninth, Miñoso led off, facing A’s pitcher John Tsitouris, who had just entered the game in relief.

With the count 3-and-1, third-base coach Tony Cuccinello gave the hit sign. Miñoso drove the next pitch high and deep into the upper deck of the left-center-field stands for a game-winning homer.16

“With a guy like Nellie Fox or Luis up, little guys who probably would get only a single anyway, you’d let them take,” explained Cuccinello after Chicago’s dramatic 10-9 win. “But guys with power, who can reach the wall or hit it between the fielders, you have them swing. [The pitcher] has to throw a strike. He got it where the power was, and it was gone.”17

Miñoso gave credit to teammate Earl Torgeson for his two-homer, six-RBI performance. He had been using Al Smith’s bat during the spring, but it didn’t feel right on Opening Day so he borrowed Torgeson’s bat.18

“He made a helluva catch, do you know that?” said White Sox manager Al Lopez. “And a great throw, a real great throw. Miñoso was a big factor in that game.”19

“I was tense,” said Miñoso. “Like a kid just starting out. I had to make good and I’m glad I did.” After his game-winning home run, the new scoreboard again flashed: “Welcome Home Minnie, It’s Good to Have You Back.”20

This article was fact-checked by Evan Katz and copyedited by Len Levin.

4 Robert Cromie, “Miñoso’s Home and His 2 Home Runs Prove a Point,” Chicago Tribune, April 20, 1960: 55. While serving as Chicago’s general manager, Frank Lane had originally acquired Miñoso from Cleveland in 1951. When Lane became general manager of the Indians, his first trade was to acquire Miñoso from the White Sox. After Cleveland finished second to Chicago in 1959, Lane traded him back to the White Sox.

10 In 1959 Kansas City had the second most errors in the American League and was tied for the worst fielding percentage.