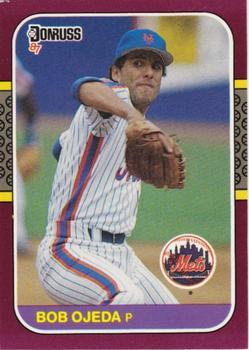 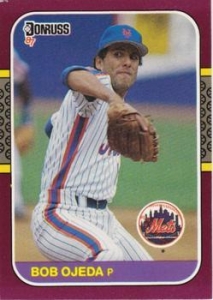 The ticker tape had barely settled from their World Series celebration in 1986 when the New York Mets faced an offseason of key departures and unwelcome headlines, the first signs that their reign might not last. On Opening Day 1987, however, the Mets again demonstrated championship form, parlaying Darryl Strawberry’s first-inning home run and Bobby Ojeda and Jesse Orosco’s clutch pitching into a 3-2 win over the Pittsburgh Pirates on April 7 at Shea Stadium.

The 1986 Mets seized first place in the National League East on April 22 and never left, through high-fives and curtain calls,1 shrewd baseball2 and bench-clearing brawls, sheer domination and final-inning triumph. After finishing with 108 wins, 21½ games ahead of their closest foe, they beat the Houston Astros in the NLCS and Boston Red Sox in the World Series, with Orosco raising his arms and falling to his knees on Shea Stadium’s mound after Boston’s Marty Barrett waved at the final pitch in Game Seven.

But the gathering storm of management decisions, human fallibility, and competitive challenges that eventually eroded the Mets’ dynasty-in-waiting trailed the parade closely. Stalemated in contract negotiations, third baseman and World Series MVP Ray Knight left as a free agent.5 Kevin Mitchell—who had led all NL rookies in slugging percentage, handled six defensive positions, and scored the tying run in an improbable World Series rally—went to the San Diego Padres, the centerpiece of a deal for left fielder Kevin McReynolds.6

As Opening Day approached, the ill wave grew when Strawberry’s wife accused him of assault and other violent acts.9 But baseball’s policies on player misconduct meant that another star’s offenses had even greater short-term consequences for the Mets.10

Dwight Gooden’s first three major-league seasons—two superlative, one merely outstanding—had yielded Rookie of the Year and Cy Young honors, two strikeout titles, and a 58-19 record, all before his 22nd birthday. Gooden was slated for his third consecutive Opening Day start in 1987, but April 1 brought stunning news: He had entered a rehabilitation center after testing positive for cocaine, avoiding suspension by Commissioner Peter Ueberroth.11

Ojeda started the opener in Gooden’s place.12 The 29-year-old left-hander had led the Mets’ rotation with 18 wins and a 2.57 ERA in 1986, then won games in the NLCS and World Series.

With 46,102 fans in attendance on a cool, gray afternoon, the Mets received their World Series rings, and Ojeda took the mound. New York had beaten the Pirates 17 times in 18 games in 1986, but Pittsburgh, last in the division for three seasons in a row, was building a talented young team for second-year manager Jim Leyland, including 22-year-old center fielder Barry Bonds and 24-year-old left fielder Bobby Bonilla.13

Johnny Ray and Bonilla nipped Ojeda for two-out singles in the first inning, but Andy Van Slyke, acquired from the St. Louis Cardinals six days earlier in a trade for All-Star catcher Tony Peña,14 fanned to strand them at the corners.

Bob Patterson, a 27-year-old lefty with 11 appearances for Pittsburgh in 1986, was the Pirates’ starter. After Wilson’s leadoff single,15 Tim Teufel hit an apparent fly out to left, but umpire Billy Williams ruled that catcher Junior Ortiz had interfered with Teufel’s swing, putting runners on first and second.16

Patterson retired Keith Hernandez on a lineout to right. When shortstop Rafael Belliard ran down Gary Carter’s pop-up in short left, Patterson was one out from escaping the jam, with Strawberry up.

The first pitch to Strawberry, who had led the Mets with 27 homers in 1986, was a breaking ball, catching the outside corner.17 The second pitch bounced in the dirt.

Patterson aimed the 1-and-1 offering inside, but it strayed over the plate. Strawberry, wearing a pair of Gooden’s uniform pants,18 swept his bat through the strike zone and drove Patterson’s fastball to deep right-center, clearing the fence in front of the scoreboard for a 3-0 lead.

Two singles to start the second positioned the Pirates to answer Strawberry’s blast. Jim Morrison bunted Ojeda’s first pitch of the inning for a hit, deadening it before Johnson could react at third. Sid Bream bounced the next pitch into right; Morrison held at second.

But Pittsburgh had reached the bottom of its order, and Belliard’s fly to center was the first out. Patterson tried to sacrifice, but Hernandez—who received his 10th consecutive Gold Glove in 1987—charged from first, pounced on the bunt, and threw to third for the force. Bonds’ fly out stranded the runners.

The next few innings followed this pattern: Pittsburgh put runners on base; Ojeda and the Mets kept them from scoring. Aided by two errors, Pirates occupied the corners with one out in the third, but Van Slyke’s strikeout and Morrison’s fly ball left them there. Ojeda turned comebackers into double plays in both the fourth and fifth innings.

Pittsburgh finally broke through in the sixth. With one out, Van Slyke hit a liner to right. Strawberry attempted a shoetop catch, but the ball dropped in and skipped behind him. As Strawberry chased it on the wet grass, Van Slyke dashed to third; the play was scored a triple.

Morrison followed by lining an off-speed pitch into left for a single, driving in Pittsburgh’s first run.

In the meantime, Patterson was containing the Mets. Pitching through the sixth, he scattered just three singles after Strawberry’s homer, while allowing no Met past second base.

Ojeda encountered another threat in the seventh. Bonds placed a fly ball inside the right-field line for a one-out double. Ortiz popped a surprise bunt toward third and beat Ojeda’s off-balance throw for a single.

Runners were at first and third for Ray, who had batted .301 in 1986. But he smashed a one-hopper at second baseman Teufel, who started an inning-ending double play.

The bullpens traded scoreless innings; Brian Fisher dismissed the Mets in order in the seventh, and Orosco turned in New York’s only spotless frame of the day in the eighth. Bonds’ one-bounce throw on Carter’s single beat Hernandez home in the bottom of the eighth, keeping it a two-run game.19

In search of the save, Orosco opened the ninth by allowing Bream’s single. Onix Concepcion batted for Belliard and singled in front of Strawberry; Bream took second.

With two on and none out, Leyland sent up Mike Diaz to pinch-hit against the left-handed Orosco. A season earlier, Diaz, a muscular college football recruit nicknamed “Rambo” after the popular Sylvester Stallone movie character, had emerged as a power bat against lefty pitching, hitting nine of his 12 home runs against left-handers.20

Diaz got under Orosco’s pitch and hit a high fly to left, which McReynolds grabbed for the first out.21 But the Pirates kept up the pressure, loading the bases on Bonds’ four-pitch walk.

Ortiz hit a dribbler up the first-base line. Struggling with his footing on the damp surface, Orosco kicked the ball into foul territory, then hit Ortiz with his throw to first.22 Bream scored on the infield single—Pittsburgh’s 13th hit—and the deficit was only a run, with the bases still loaded.

The Pirates, however, got no further. Ray popped the first pitch to Wally Backman, now at second. Bonilla likewise was done on a single pitch, grounding softly to Backman for the final out.

After their difficult offseason, the Mets had again come together to win.

“Something inside me was eating me up, and I was determined to do well,” Strawberry said afterward.23 “I wore [Gooden’s] pants because I felt comfortable in them. Not having my closest friend on the ballclub motivated me.”24

“You want to put more heat on us?” Backman said.25 “Fine, do it. So we got dealt a different hand than we thought we were gonna get. Let’s play it. We’re still the best.”26

But the future did not belong to the Mets. Ozzie Smith, Jack Clark, and the Cardinals overtook them for the NL East title in 1987.27 After New York’s 1988 division title and upset NLCS loss to the World Series-winning Los Angeles Dodgers,28 Ryne Sandberg, Greg Maddux, Mark Grace, and the Chicago Cubs frustrated Met ambitions in 1989.29 By 1990 Pittsburgh, led by Bonds, Bonilla, and Van Slyke, was on top of the division.30

In the aftermath of Opening Day 1987, Bonds spoke for the challengers’ competitive will—a factor, with increased talent and New York’s internal struggles, in the Mets’ downfall.

“They showed today that they are not going to let the events of the past winter and the spring affect them,” Bonds said.31 “But I refuse to go one more year with the Mets beating us. Whatever it takes, I’m going to do it.”32

This article was fact-checked by Bruce Slutsky and copy-edited by Len Levin. SABR members Kurt Blumenau and Greg Prince, author of the  Mets blog Faith and Fear in Flushing, provided insightful comments on an earlier version of the article.

In addition to the sources cited in the Notes, the author consulted the Baseball-Reference.com and Retrosheet.org websites for pertinent material and the box scores noted below. He also used game coverage from the Newsday (Long Island, New York), New York Daily News, Pittsburgh Post-Gazette, and Pittsburgh Press newspapers; and a YouTube video of WOR-TV’s game broadcast, at the link below. ESPN’s “30 for 30” documentary on the 1986 Mets, Once Upon a Time in Queens, directed by Nick Davis and released in 2021, was a helpful source of background information.

2 In New York’s 4-2 Opening Day win in Pittsburgh in 1986, for example, key plays included Keith Hernandez taking third on a throw to the plate, positioning himself to score on a sacrifice fly; Lenny Dykstra hustling from center to left to secure a ball that George Foster had misplayed and holding a Pittsburgh batter to a triple; and Dwight Gooden’s alert play to get an out on an unexpected bunt.

10 Baseball’s drug policy at the time, as enforced by the commissioner, required a yearlong suspension for drug use, unless a player entered an approved treatment facility. Jim Corbett, “Ace Pitcher Put on Disabled List After Testing Positive for Cocaine,” New York Daily Item, April 2, 1987: 1. The major leagues, by contrast, did not have a policy to discipline players for domestic violence until 2015. As a result, Strawberry did not face sanctions from the Mets or the league for his wife’s allegations. Gabe Lacques, “MLB Announces Domestic Violence, Assault and Child Abuse Policy,” USA Today, August 21, 2015, https://www.usatoday.com/story/sports/mlb/2015/08/21/mlb-announces-domestic-violence-sexual-assault-child-abuse-policy/32140129/.

18 Tom Verducci of Newsday noted that Strawberry wore Gooden’s pants, “not out of any symbolic intentions. His own pants were too baggy at the knee.” Tom Verducci, “Right off the Bat, Straw Is Stirring,” Newsday, April 8, 1987: 142.

19 The Pirates played Bonds in center and Van Slyke in right until May 30, when they moved Bonds to left and Van Slyke to center, which remained their defensive alignment until Bonds left as a free agent after the 1992 season. Steve Hubbard, “Van Slyke Becomes Center of Leyland’s Juggling Act,” Pittsburgh Press, June 1, 1987: D3.

21 “They say it’s a game of inches,” Diaz said. “That at-bat was a game of centimeters. I just missed it.” Paul Meyer, “Pirates Drop Opener Amid Echoes of ’86: Strawberry’s HR Stands Up,” Pittsburgh Post-Gazette, April 8, 1987: 11. In two games later in the 1987 season, on April 20 and in the second game of a doubleheader on June 8, Diaz hit three-run homers off Mets relievers to give the Pirates leads that they never relinquished.

24 O’Connell, “A Stirring Opener!”; Mike Lupica, “Mets Are Back in Business: Put Winter of Discontent Behind Them with Vintage Victory,” New York Daily News, April 8, 1987: 37.

27 Jack O’Connell, “Crusher at Shea,” New York Daily News, September 12, 1987: 28. The Pirates aided the Cardinals, who won the division by three games, by splitting six games with the Mets in September 1987.