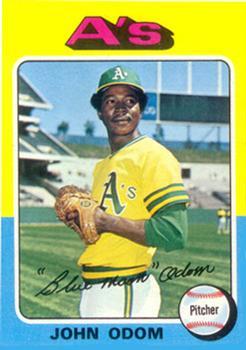 Tradition dictates that you don’t talk about a no-hitter in the dugout while it’s still underway. That’s why Chicago White Sox rookie Francisco Barrios was so surprised when he learned he was finishing one on July 28, 1976, in Oakland.

“Nobody in the dugout said anything,” the 23-year-old right-hander explained. “I didn’t find out about it until I looked up at the scoreboard when I went out to pitch the ninth inning.”1

In contrast, the teammate he’d relieved in the sixth inning was such a bundle of nerves that he’d relegated himself to the visitors’ clubhouse. “I listened to the end on the radio. I couldn’t stand to watch. It was like the seventh game of the World Series,” Blue Moon Odom recounted after the game.2 “I couldn’t take it, man. I was in here pacing the floor.”3

The no-hitter was doubly sweet for Odom, a 31-year-old right-handed veteran. First, it was an achievement he’d been chasing since his second career start, a two-hit shutout of the Baltimore Orioles on September 11, 1964. Odom blamed the hometown scorekeeper for crediting the Orioles with two hits he felt were Oakland errors. “If I’d have been a veteran, I’d have had a no-hitter.”4

Also, it came in his first ever start against his former team, the Oakland A’s, with whom he’d earned three World Series rings. “The A’s gave up on me last year. I only wish Alvin Dark were here tonight,” Odom said of the former A’s manager, who’d traded him to the Cleveland Indians during the previous season, his 12th with the Athletics.5

Odom had been 0-2 with a 12.27 ERA through his first seven appearances of 1975 when he was sent packing in May. In Cleveland, he demanded a $10,000 raise and was swiftly traded to the Atlanta Braves, just 20 days and three appearances into his stint with the Indians. After he amassed a 1-7 record with a 7.07 ERA, Odom was demoted to the Braves’ Triple-A affiliate in Richmond, Virginia. Chicago traded for him in June 1976, and after three starts with the Triple-A Iowa Oaks, he was back in the majors.

Making his second start and fifth appearance for Chicago,6 Odom retired the first two Oakland batters he faced, then, in what would become the theme of this game, walked Joe Rudi before getting Billy Williams on a groundout. Odom went on to walk at least one batter in every inning he pitched.

The White Sox gave him a lead in the top of the second. Jim Spencer smacked a leadoff double to left field, went to third on Jack Brohamer’s fly ball to right fielder Claudell Washington, and scored when Bucky Dent dropped a single into left.

Odom then issued a leadoff walk to Sal Bando, but followed with a double-play grounder by Gene Tenace before escaping the inning with a fly out by Washington to right fielder Jerry Hairston.

Odom repeated his second-inning opening sequence in the third, but with Ken McMullen earning the base on balls and Phil Garner hitting the double-play grounder. This time, however, he walked Bill North and Bert Campaneris back-to-back before Rudi grounded out to Dent.

“Odom had a pretty good fastball for two innings, then threw a lot of off-speed junk,” Williams commented.8

Oakland manager Chuck Tanner, who had been fired by the White Sox during the previous offseason,9 disclosed, “I kept telling the hitters, ‘Wait for your pitch. If you don’t get it, he’ll walk you.’”10

“He was all over the place,” White Sox catcher Jim Essian confirmed.11

But Odom had a more positive spin. “They didn’t know what to expect. I guess I was wild enough to be effective,” he suggested.12

Effective or not, Odom’s wildness cost him in the fourth inning. He walked the leadoff hitter—Williams, this time—for the third straight inning. With one out, he also walked Tenace, who was thrown out at second on a fielder’s choice by Washington, as Williams took third. When Washington tried to steal second, Essian’s throw bounced in the dirt and past second baseman Jack Brohamer, allowing Williams to come home and tie the game.

Sometime during all this, Chicago manager Paul Richards placed his first call to the bullpen with orders to get Barrios warmed up. The stocky right-hander loosened up his arm with his back to the game and his mind on his pitches. Whenever Barrios turned around, he saw runners on the basepaths, so it never occurred to him that a no-hitter was underway.

Barrios was told to stand down as Odom struck out McMullen to end the inning, though it wasn’t long before he’d be up again. In the fifth, Odom retired the first two batters before surrendering his eighth walk of the night to Campaneris. He struck out Rudi, but Richards had the hook ready.

In the top of the sixth inning, Spencer put Chicago back in the lead with a two-out, solo home run. Up 2-1, Odom took the mound to start the sixth, but didn’t stay there long. Another leadoff walk put Williams on first and put Odom one walk away from the record books.

In two previous no-hitters, pitchers Jim Maloney, in 1965, and Steve Barber, in 1967, had each walked 10 batters. Maloney needed 10 innings to do so, and Barber spread his out over 8⅔, while Odom had walked nine in five-plus innings.

The paltry crowd of 3,367 wouldn’t get to see a 10th walk, at least not from Odom. With Barrios ready, Richards decided Odom’s next pitch outside the strike zone would be his last. He wouldn’t have to wait long as the starter’s first offering to Bando was ball one.

Coach Jim Busby walked to the mound to take the ball, and Odom didn’t put up any argument. “I knew I had lost my rhythm,” he admitted.13

Barrios made his way in from the bullpen and took his warm-up pitches, focused on preserving the one-run lead and oblivious to his role in history. Already behind in the count, he walked Bando to tie the record for most walks issued by a winning team in a no-hitter.

But the reliever bounced back in spectacular fashion, retiring Tenace on a pop foul and inducing a not-at-all-routine, 1-6-2-5-6 double-play from Washington.14 He’d go on to retire the A’s in order the following inning and the next as well, but not without a brief scare. Campaneris led off the eighth with a long fly ball that seemed certain to reach the wall for extra bases, but left fielder Jorge Orta ran it down and snagged it at the warning track.

Taking the mound in the ninth, Barrios glanced at the scoreboard and did a double take, suddenly realizing what everyone else in the ballpark already knew. “I look up at the scoreboard and see zero. Then I really start to bear down,” he recounted. “I was talking to [the ball]. I say, ‘Come on, come on.’”15

Leading off the inning, Bando dribbled a slow grounder toward second. Brohamer charged onto the infield grass, scooped the ball, and flipped it underhand to Spencer just as the A’s team captain stepped on the bag. First-base umpire George Maloney signaled out and Bando exploded in rage, charging the ump. “I was safe. There was no doubt about it,” Bando later complained. “But I don’t expect Maloney to call me safe because he can’t see in the first place.”16

Tanner stepped in to calm his third baseman down, but agreed with Bando’s sentiment, stating, “He was safe, easy,”17 and calling the game “the most tainted no-hitter I’ve ever seen. Or maybe I should say the funniest.”18

Barrios struck out Tenace next and needed just one more out to save the no-hitter. And as he blew a 2-and-2 pitch past Washington, the rookie nearly began celebrating before realizing the pitch had been called a ball. Barrios got the third out, but not before Washington drew the record-breaking 11th walk of the game.19 McMullen followed with a grounder to shortstop Dent, who tossed to Spencer to end the game.20

In the clubhouse, Paul Richards had nothing but praise for his rookie, who had retired 10 straight batters before Washington’s two-out walk. “Now there is a pitcher. Franco … really knew what he was doing out there,” he gushed. For Odom, the manager’s sentiment was different: “I just don’t see how he can walk that many and get by.”21

The veteran had a different perspective. “Maybe if I’d been around the plate all the time, we wouldn’t have gotten the no-hitter,” Odom suggested. “I’m glad I was wild.”22 Reflecting on the moment, he added, “Man, this is one of the happiest times of my life. I think I proved to a lot of people I can still pitch in the major leagues.”23

The major leagues disagreed. After three more games, in which he went 0-2 with an ERA of 9.82, allowing 25 baserunners and 12 runs in 11⅔ innings, Odom’s big-league career was over.24 Chicago released him the following January. He started 1977 pitching for the San Jose Missions, Oakland’s Triple-A farm team, then went to the Mexican League, and retired in 1978.

This article was reviewed by Kevin Larkin and copy-edited by Len Levin.

In addition to the sources cited in the Notes, the author accessed Baseball-Reference.com, Stathead.com, and The Sporting News archive via Paper of Record.

4 Mike Hall, “Odom’s Greatest? Combined No-No Against A’s,” Richmond (California) Independent, July 29, 1976. The article incorrectly reports that Odom “went 8⅔ innings before giving up a hit” in the 1964 game. In actuality, Sam Bowens broke up the no-hitter in the seventh inning, and Brooks Robinson had a single with no outs in the ninth. Chicago Daily News reporter Armand Scheider also quoted Odom saying, “I came close in 1964 and again in 1965, both times going into the ninth against Baltimore.” Armand Schneider, “Odom, Barrios Pitch No-Hitter,” Miami News, July 29, 1976: 1C. In his career, Odom took four starts against Baltimore into the ninth inning, but none were in 1965. Sports Reference LLC, https://stathead.com/tiny/lYGA2. In fact, Odom pitched only one inning in 1965, against the Washington Senators on September 22. The game he was likely referencing in both cases was played June 7, 1968, in which Odom threw 8⅔ hitless innings before Davey Johnson managed a broken-bat single to right field. After that game, Odom told Baltimore Sun reporter Lou Hatter, the official scorer of the 1964 game, “That was a no-hitter, actually. I’ve got the film at home to prove it.” Ron Bergman, “Moon Is Blue, but Athletics Win Two,” Oakland Tribune, June 8, 1968: 15.

6 His three relief appearances all came when Chicago was well behind. In his only start, on July 22 against the Detroit Tigers, Odom went seven innings and earned the win.

9 Tanner managed Chicago from the last 16 games of the 1970 season through 1975, winning Manager of the Year honors in 1972. Despite signing a three-year contract with Oakland, 1976 would be his only season with the A’s, who traded him to the Pittsburgh Pirates for catcher Manny Sanguillén and $100,000.

14 Washington hit the ball back up the middle to Barrios, who threw to Dent covering second to get Bando. Dent then threw home to deter pinch-runner Larry Lintz from scoring. Catcher Essian threw to third baseman Bill Stein, who relayed the ball back to Dent to catch Washington trying to advance to second.

15 Dozer, “Odom, Barrios Share No-Hitter.” Talking to the ball led several to compare Barrios to another AL rookie pitcher, Mark Fidrych, who would make his Oakland debut a month later in a 12-inning complete-game loss.

20 The game marked the first time two pitchers combined to win a no-hitter. It was the fourth combined no-hitter in major-league history. The third had come less than a year earlier, in the same ballpark.

24 Odom was the first major leaguer to throw a no-hitter, albeit a combined one, in his final career win. Joe Cowley, who threw the White Sox’ next no-hitter, in 1986, would become the second and the first to do so with a complete-game no-no.