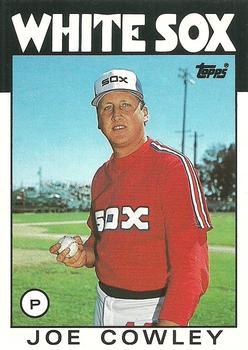 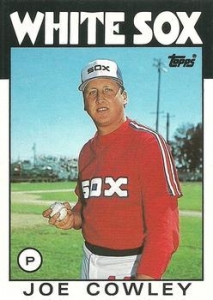 It had been nearly two years since the major leagues had seen a no-hitter.2 Just 11 days shy of the anniversary of Mike Witt tossing the 11th perfect game in major-league history in California’s final game of the 1984 season, the Angels found themselves on the other end of being no-hit … though this game was far from perfect.

Joe Cowley wasn’t likely to be anyone’s best guess for who would end the drought. The Chicago White Sox right-hander had been demoted to Triple-A Buffalo earlier in the season. Two seasons earlier, sportswriter Peter Gammons had named Cowley, then with the New York Yankees, the American League’s third “biggest flake.”3 Former Yankees teammate Don Baylor described Cowley as “off on his own planet,”4 and manager Billy Martin said he was “two different people”5 and “just cuckoo enough to win.”6

The 28-year-old’s career was marked by extreme highs and lows, an inconsistency that was one of the most consistent things about him. Cowley’s two sides may have been best demonstrated earlier in the 1986 season when, on May 28, he set a post-1900 record for strikeouts to start a game.7 He whiffed the first seven Texas Rangers he faced, only to give up six runs in the next 2⅓ innings, get pulled during the fifth, and take a 6-3 loss.

Cowley hadn’t gotten to sleep until after 6:00 the morning of September 19. The White Sox had a late flight out of Seattle following a win over the Mariners the previous night and didn’t get to the hotel until after 5:00 A.M.8 When he woke up at noon, the still sleepy hurler had no reason to suspect he was hours away from making history. “In the warmups, I was pitching so lousy,” Cowley recalled.9

The two teams were on opposite trajectories. At 65-81, Chicago was 20½ games behind California in the standings, holding the third-worst record in the AL. Manager Tony La Russa was fired midseason, and new general manager Ken Harrelson’s constant trades made it feel as if the clubhouse had a revolving door.10

California, on the other hand, was atop the AL West standings with 85 wins and a magic number of eight, weeks away from playing what became a seven-game ALCS showdown with the Boston Red Sox. The previous night, the Angels had clobbered the Kansas City Royals in an 18-3 onslaught, highlighted by Reggie Jackson smashing three home runs to increase his career total to 546. Plus, they’d slept in their own beds.

For the first two innings, Cowley was perfect, but in the third he began to show the first signs of the trouble that plagued him all night. After striking out right fielder Devon White, Cowley walked Dick Schofield, batting eighth. Schofield then stole second, but when he attempted to take third as well, rookie catcher Ron Karkovice snapped a throw down the line that caught him. Cowley issued another free pass, to catcher Bob Boone, before getting out of the inning with a K to leadoff hitter Gary Pettis.

His teammates put the game’s first two runs on the board off Kirk McCaskill in the fourth on Harold Baines’s RBI single and Russ Morman’s run-scoring groundout. Cowley opened the bottom of the fourth by walking Wally Joyner, but the first baseman, headed for a runner-up finish in AL Rookie of the Year voting, was left stranded on second after three more outs.

White Sox third baseman Tim Hulett added another run in the fifth inning, reaching on a single, stealing second, and advancing to third on a throwing error by Boone. Hulett then scored on Daryl Boston’s double, giving Cowley a 3-0 lead heading into the sixth, where his night nearly ended.

Facing 9-1-2 in the order, Cowley opened the inning by walking Boone. Another base on balls, to Pettis, followed. Joyner then drew Cowley’s sixth walk of the night, loading the bases for the heart of the Angels’ order.

Chicago pitching coach Dick Bosman, who himself had thrown a no-hitter for the Cleveland Indians 12 years earlier,11 made a visit to the mound to calm the pitcher and buy time for the arms warming up in the bullpen. Whatever the coach told Cowley worked as Brian Downing popped out to second.

That brought Jackson to the plate, with many in the crowd of 28,647 hoping for a fourth homer from “Mr. October” in just over 24 hours. As Reggie worked the count to 3-and-1, White Sox manager Jim Fregosi prepared to go to his relievers. “If [Cowley] walks Jackson,” Fregosi confirmed afterward, “he’s not going to see [Doug] DeCinces.”12

Jackson swung at the next pitch and belted a fly ball to center field. Boston made the catch, but it was deep enough to let Boone trot home and move Pettis to third, cutting California’s deficit to 3-1.

With runners on the corners, Cowley induced a popup from DeCinces to get out of the inning, then came back in the seventh to strike out Bobby Grich and White before Schofield drove a pitch deep to center field and into Boston’s glove for a three-up-three-down inning.

Cowley opened the eighth by retiring Boone and Pettis. After the three-walk sixth-inning adventure, he had set down eight Angels in a row. But then he faced another hurdle as Joyner, who entered the game with a .291 batting average, came to the plate.

Two pitchers had taken no-hitters against the Angels into the ninth earlier in the season, and Joyner broke up both. On June 16, Rangers knuckleballer Charlie Hough lost both his no-no and his shutout with two outs to go when Joyner followed a three-base error by slapping an RBI single. Hough was tagged with the 2-1 loss when Joyner came home on a passed ball three batters later. Two months after that, on August 20, Detroit’s Walt Terrell got even closer to no-hitting California before Joyner doubled with two out in the ninth inning.

This time, however, Joyner hit a liner at shortstop Ozzie Guillen, putting Cowley just three outs away from history.

In the top of the ninth, Karkovice added a solo home run to bring the score to 7-1.

Cowley took the mound in the ninth and issued his seventh walk of the night, to Downing, three shy of Jim Maloney’s major-league record for walks in a no-hitter, set in 1965. After another fly out for Jackson, DeCinces got a piece of Crowley’s 138th pitch of the night13 and shot a groundball to the left side of the infield.

“I threw the ball to DeCinces exactly where I wanted to,” Cowley recounted, “low and away. He hit it right to Ozzie.”14As the ball passed him on the mound, Cowley began to celebrate while watching Guillen scoop the grounder and toss it to second baseman Jack Perconte, who spun and threw to Morman for a 6-4-3 double play that secured the 15th no-hitter in White Sox history.

The last no-hitter for Chicago came just over 10 years earlier when Blue Moon Odom and Francisco Barrios combined to no-hit the A’s in 1976. Cowley was the first White Sox pitcher to throw a complete-game no-hitter since Joel Horlen blanked the Tigers 6-0 in 1967.

What remained of the crowd at Anaheim Stadium gave Cowley a standing ovation, but others were less than awestruck by his effort. “He wasn’t tough at all,” Joyner insisted, chalking it up as more of an Angels failure than a Cowley success. “We didn’t get a hit. That’s all that happened. If you guys don’t look up at the scoreboard, you’d think he gave up eight or nine hits. … I’m not even frustrated. It wasn’t impressive.”15

Even Fregosi was selective in his words praising his pitcher. “He had great stuff tonight,” the manager said, before adding, “when he got it over the plate.”16

But the criticism didn’t bother Cowley. “Some people said it was ugly,” he admitted, “but how many hits did they get? There’s nothing ugly about that.”17

The box score of Cowley’s unusual gem offered several oddities. It was only the 12th time in major-league history that the losing team in a no-hitter had scored, and, as of May 2022, Boone was the last player to have scored an earned run in a no-hitter.18

In a bittersweet climax, the no-hitter was the last win of Cowley’s major-league career.19 He went 0-2 in his final three starts of 1986 and, after being traded to Philadelphia in the offseason, pitched just 11⅔ innings in 1987, going 0-4 with a 15.43 ERA, before being demoted to Triple-A Maine and eventually retiring.20

In addition to the sources cited in the Notes, the author also accessed Baseball-Reference.com, Stathead.com, Retrosheet.org, and The Sporting News archive via Paper of Record.

2 The 719 days since Witt’s perfect game was the longest span between no-hitters since the 971-day gap between Lon Warneke no-hitting the Reds on August 30, 1941, and Jim Tobin shutting down the Dodgers’ bats on April 27, 1944.

3 Peter Gammons, “Who’s Who in the A.L. for Ardent Devotees,” The Sporting News, September 17, 1984: 23. Minnesota outfielder Mickey Hatcher and Oakland reliever Bill Caudill were numbers 1 and 2 as biggest flakes.

7 Mickey Welch struck out the first nine Cleveland batters he faced on August 28, 1884. Prior to Cowley’s seven-K start, five twentieth-century pitchers had struck out six hitters to start a game.

11 In contrast to Cowley’s performance, Bosman walked no one and only cost himself a perfect game when he fielded a Sal Bando grounder in the fourth inning and hurriedly threw wide of first baseman Tommy McCraw’s glove.

13 Cowley would throw a nicely balanced 69 strikes and 69 balls in the game.

18 On May 15, 2022, two Cincinnati Reds pitchers combined to hold the Pittsburgh Pirates hitless in Pittsburgh, but the Pirates scored an earned run in the eighth inning (Rodolfo Castro scored when Ke’Bryan Hayes hit into a fielder’s choice) and won, 1-0. As the Reds pitched only eight innings in that game, it is not recognized as an official no-hitter. Since Cowley’s no-hitter, two no-hitters have seen unearned runs plated (as of April 2022): Jeff McKnight scored on a Jeff Bagwell throwing error in Darryl Kile’s September 8, 1993, 7-1 no-hitter; and Asdrubal Cabrera scored from third on a wild pitch in Ervin Santana’s July 27, 2011, 3-1 no-hit win. Mark Lewis scored an earned run in an April 12, 1992, game in which Matt Young held Cleveland hitless, but because Boston lost 2-1, it is not officially recognized as a no-hitter.

20 Within a week of his no-hitter, a pair of Astros overshadowed both of Cowley’s biggest accomplishments. On September 23 Jim DeShaies, one of Cowley’s former teammates in the Yankees minor-league system, broke the record for most Ks to start a game by striking out the first eight Dodgers he faced. Two days later, Mike Scott no-hit the Giants to clinch the NL West title for Houston.