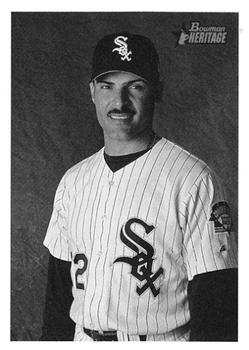 On April 27, 2000, the Baltimore Orioles and Chicago White Sox were completing a four-game series in front of “a sun-splashed crowd of 13,225”1 at Chicago’s Comiskey Park. Both teams had experienced success in the early part of the season. Baltimore (12-8) had already put together winning streaks of five and six games, while Chicago (14-7) had won eight of 11 on their 12-game homestand. The White Sox had won two of the first three games, and the teams had combined for 45 runs in the three contests.

The series finale featured another slugfest, led by Chicago’s shortstop, José Valentin, who hit for the cycle as the White Sox rolled to a one-sided victory.

The 30-year-old Valentin was in his first season with the White Sox. After eight seasons in a Milwaukee Brewers uniform, Valentin and Cal Eldred were traded to Chicago on January 12, 2000, for Jaime Navarro and John Snyder. Chicago had finished in second place in the American League Central Division in 1999 and was trying to build a team that could reach the playoffs for the first time since 1993.

For the home team, left-hander Jim Parque took to the mound, looking for his third straight win. He was in his third big-league season (all with the White Sox to this point) and in 2000 he had the best year of his career.2

José Mercedes started for the visiting Orioles. He had been teammates with Valentin in Milwaukee from 1994 to 1998. After bouncing around the National League in 1999 (he was signed and released by the San Diego Padres, Florida Marlins and New York Mets, and he did not appear in any major-league games), the right-hander was signed as a free agent by the Orioles in the offseason. The 2000 season proved to be the best season of his career, too.

After Parque hit Orioles leadoff batter Brady Anderson with the second pitch of the game, Delino DeShields swung at Parque’s first pitch to him and doubled into right-center field, plating Anderson. The Orioles wasted an opportunity to add to their early lead; after DeShields moved to third on a groundout, he was called out at the plate when Albert Belle grounded to second baseman Ray Durham, who fired home in time to catch DeShields. Belle was then caught stealing second for the inning’s third out, and Baltimore settled for just one run.

Durham started the bottom of the first with a double down the left-field line. Valentin then laid down a perfect bunt toward third that Cal Ripken, winding down his career as a third baseman after a record-setting tenure at shortstop in Baltimore, could only pick up.

With runners at the corners and none out, Frank Thomas lifted a fly ball to center, deep enough for Durham to tag and score the tying run. Chicago’s rally was stopped when Magglio Ordoñez grounded into an inning-ending double play.

Jeff Conine, who had been at the plate when Belle attempted his swipe of second base in the first, led off the second by lining a double to left-center. He advanced to third on Ripken’s infield grounder. Will Clark was then hit by a pitch. Charles Johnson grounded a roller toward the mound. Parque’s only play was at first, and Conine scored to put Baltimore back ahead, 2-1.

Baltimore skipper Mike Hargrove “waited 39 pitches before pulling Mercedes”3 in the bottom of the second inning; by then, the White Sox had gone on top to stay. Paul Konerko singled and scored when Chris Singleton drove the ball into the right-field corner for an RBI triple. Second baseman DeShields took Conine’s throw and relayed the ball to the plate. Konerko had beaten the throw, which bounced off catcher Johnson, and the error allowed Singleton to also score for a 3-2 White Sox lead.

Mercedes struck out Carlos Lee but delivered back-to-back walks to Greg Norton and Mark Johnson, losing both batters on full counts. Durham forced Johnson at second for the second out, bringing up Valentin, who pulled a pitch into right field that short-hopped the fence. Norton scored, and Durham stopped at third base.

After an intentional walk to Thomas loaded the bases, eight of the first 12 White Sox batters had reached base, and at this point, Hargrove made a change. Calvin Maduro relieved Mercedes and induced Ordoñez to fly out for out number three. Chicago now led, 4-2.

Anderson led off the Baltimore third with a single but was caught stealing. Parque retired the next two batters. In the home half, Konerko blasted his sixth home run of the season to start the frame, pushing the lead to 5-2.

Maduro then walked the bases loaded, as action started again in the Orioles’ bullpen. Johnson singled to right. Singleton scored, and the bases remained full. Craig Wilson pinch-hit for Durham and flied out, not deep enough to score a run.

Valentin settled into the batter’s box for his third at-bat, still just in the third inning. He cleared the bases with his third hit of the game, a drive into the right-field corner for a stand-up triple. Chicago had broken the game open at 9-2.

Maduro surrendered an intentional walk (his fourth free pass of the inning) to Thomas. Ordoñez’s sacrifice fly scored Valentin before Konerko popped out to end the inning. Chicago had put up 10 runs before making nine outs.

Belle singled to start the fourth. It was the fourth straight inning that a Baltimore leadoff hitter had reached, but Parque proceeded to get three straight outs, keeping the score at 10-2. In the sixth, with two outs, Conine moved the Orioles a run closer with a drive over the wall in left-center for his third round-tripper of the season, a solo shot. An inning later, Anderson singled with two outs and scored on DeShields’ second double of the game. That was all the scoring Baltimore would muster for the game.

After striking out in the fifth, Valentin came to the plate in the seventh with two outs, needing a home run for the cycle. Mike Trombley was now on the mound. Valentin swung at a 1-and-1 pitch above the letters and “jacked a homer”4 into the bullpen, well beyond the right-field wall.

As Valentin rounded the bases, fireworks appeared in the sky beyond center field. The fans also erupted in a standing ovation, screaming for a curtain call, and Valentin obliged. He had just hit for the cycle.

The Orioles had another runner in scoring position in the eighth, after Mark Lewis doubled, but they did not score. In the bottom of the inning, Ordoñez reached on an error by first baseman Conine. Konerko doubled, putting two runners in scoring position. Two outs later, Norton’s single to right brought both runners home. Norton tried to advance to second on the play but was called out. Norton had made the final out in the eighth, leaving Valentin in the on-deck circle.

Anderson walked in the ninth, reaching base for the fourth time in the game, but once again, the Orioles could not capitalize. Chicago won, 13-4. Parque earned his third win of the young season.5

The White Sox posted their eighth victory in nine games. Through 22 games in the 2000 season, Chicago batters were hitting .314 as a team and averaging an astonishing 7.9 runs per game.6 And even though Valentin put up the biggest numbers, it was a team effort. Chicago banged out 13 hits and patiently took eight walks from the Baltimore pitchers. Konerko added three hits and three RBIs (he was a triple shy of hitting for the cycle himself), Singleton had a single, triple, and two runs scored, and Norton scored twice with two RBIs. The White Sox offense kept up the pace all season long, leading the majors with 978 runs scored, as Chicago won the AL Central Division title.

With his 4-for-5 performance, Valentin also scored twice and knocked in five runs, tying a career high.7 His average jumped 33 points to .296. It was his third game of the season with at least two extra-base hits. In the clubhouse after the game, Valentin told reporters, “In Milwaukee when you hit for the cycle, you get a Harley [motorcycle].”8 His White Sox teammates instead put a Big Wheel in Valentin’s locker.

2 After five seasons in Chicago, Parque became a free agent after the 2002 season and signed with Tampa Bay. He made just five appearances in 2003 and was released just before the end of the season. He never pitched again in the majors after the 2003 season.

5 When winning pitcher Parque was interviewed in the clubhouse, instead of being asked about this game, he learned he would receive a three-game suspension. According to the Belleville (Illinois) News-Democrat, Valentin “picked the wrong day to hit for the cycle,” as his feat was overshadowed by news that 16 members of the White Sox and Detroit Tigers had been suspended (for a total of 82 games) for two bench-clearing brawls the previous week (April 22, in a game won by Chicago, 14-6). See “Valentin Hits for Cycle as Chisox Rout Orioles,” Belleville News-Democrat, April 28, 2000: 35. In addition to the suspensions, nine other men were fined. The game featured 11 ejections. See https://www.retrosheet.org/boxesetc/2000/B04220CHA2000.htm for the play-by-play of the game, which includes details about the brawls and ejections.

7 Valentin drove in five runs for the first time on April 3, 1998, while playing for the Brewers. He had five RBIs in a game seven different times in his career, and on July 8, 2006, in the second game of a doubleheader against the Florida Marlins, he had seven RBIs while playing for the New York Mets, to set a new career high.

11 After Valentin, the other players to hit for the cycle in 2000 were Pittsburgh’s Jason Kendall (May 19, against St. Louis), Colorado’s Mike Lansing (June 18, against Arizona), Oakland’s Eric Chavez (June 21, against Baltimore), and Arizona’s Luis Gonzalez (July 5, against Houston).